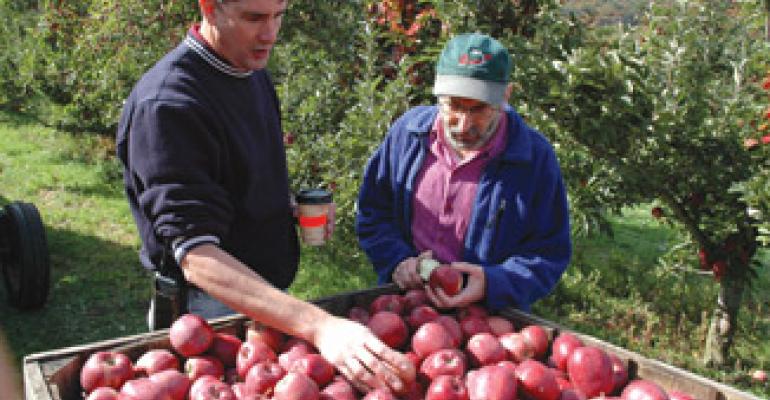 Fueled by food activism groups, consumer concerns about pesticide residues may be on the rise

Especially on the Internet, there has emerged a vibrant conversation about food and its origins. Among these conversations are claims and contentions about the dangers of pesticide residues on conventionally grown fruits and vegetables.

Spearheaded by non-profit consumer advocates such as the Environmental Working Group, one side of this argument is led by those that say consumers should prioritize buying certain kinds of fruits and vegetables while avoiding others, based on pesticide contamination.

On the other side, produce industry groups, such as the Produce Marketing Association, say that lists like these tend to scare shoppers, and that they indiscriminately discourage consumption of any and all produce.

Pesticides aren't an easy topic of conversation for retailers to engage in with shoppers, especially since the word itself can inspire fear. The EWG has created its “Dirty Dozen” and “Clean Fifteen” lists since 1995 using information from the U.S. Department of Agriculture and the U.S. Food and Drug Administration, according to the EWG's website. When asked about how consumer concerns about food have changed since EWG started its list, Alex Formuzis, vice president for media relations at EWP, said the group's work highlights the differences between conventional and organic produce.

“There are conventional produce, where pesticides are used in the production, and then there's organics, where they are not,” he said. “And pesticides are chemicals that are designed to kill, so we know they can't be good for you. And many of them have proven to be very very toxic, and as a result have been banned from use.”

The Produce Marketing Association disagrees with the idea that pesticide exposure in conventionally grown vegetables and fruit is harmful, and fears the lists may discourage consumers from buying produce. This summer, the Alliance for Food and Farming in a partnership with the PMA launched its Safe Fruits and Veggies campaign with the website, www.safefruitsandveggies.com, which hosts two reports, one by a toxicologist and one by panel of scientists, that analyze and deny the EWP's pesticides claims.

“The main goal of our campaign is to provide the tools to help reassure consumers that regardless if they choose conventional or organic produce, both are very safe to consume,” said Teresa Thorne, spokeswoman for the Alliance for Food and Farming. She said the group wants to remove consumer fear as an obstacle to eating fresh produce.

Thorne said the website is a great place for retailers to send consumers to get easy answers to tough questions, and the alliance is planning to continue to add resources. In addition to a panel at the PMA Fresh Summit conference last summer, the alliance will reach out directly to retailers through webinars and one-on-one meetings They are also currently working on a consumer report.

“The alliance has done an extraordinary job, particularly on the area of pesticide usage, in kind of taking back our brand,” said Lorna Christie, executive vice president and chief operating officer of PMA.

The group's efforts have helped, both “from the standpoint of working with consumer messaging, as well as giving us for the first time the foundation to go back to groups like EWG and say your claims have no scientific basis,” she added.

“The conventional growers always claim we're trying to get people to only eat organics, which is absurd,” Formuzis said. “We would never say, if the choice is between a conventional apple and a bag of Cheetos, pick the Cheetos. No, eat your fruits and vegetables, regardless if they're grown conventionally or if they're organic. The benefits of having a diet which includes substantial amounts of fruits and vegetables far outweighs being exposed to these pesticide residues.”

Although national sales slowed somewhat during the recession, shoppers are still very interested in organic and natural products in general, according to Chicago-based consulting group Mintel's 2010 report “Consumer Attitudes Toward Natural and Organic Food and Beverage.” Mintel expects sales to increase as the economy improves.

“We have more than quadrupled sales of organic produce in the past six years and continued on a solid upward swing last year, selling 16% more organic produce than in 2009,” he said.

The growth in organic foods is mirrored in other regions as well.

But, Publix has heard few pesticide concerns from customers, and the questions they have are usually related to food allergies or sensitivities, said Brous. “Customers seem to have more confidence in our food supply.”

The level of concern that shoppers express can vary widely, based on local demographics as well as store format and location.

For example, PCC Natural Markets in Seattle provides its members and shoppers with 95% organic produce. Trudy Bialic, director of public affairs for PCC, said customers always want to avoid pesticides, “but shoppers also increasingly are beginning to realize that the pesticide load in non-organic foods is greater than ever because of genetically modified crops.” PCC's shoppers ask questions about the origin of produce, fair labor practices and “the communities where the produce was grown.”

Despite the growth of organic foods, the amount of people actively voicing concerns about pesticides is smaller than one might think, although these consumers do tend to be more vocal, said Jarrett Paschel, vice president of strategy and innovation at the Hartman Group, Bellevue, Wash. He said customers may indicate pesticides as a concern on surveys, but their behavior at the shelf is very different.

In addition, consumers are buying organic foods for reasons unrelated to pesticides, he argued.

Even if organic shoppers are not solely concerned about pesticides, it's clear they are interested in choice and information when buying produce. Mintel's report found consumers who are interested in natural and organic products are more often interested in sustainability, local and fair trade.

This desire for information and greater transparency has led retailers to communicate with shoppers in new and different ways about their produce. PCC develops a connection between its growers and shoppers through profiles of growers on its website, and in-store photographs of farmers and signs indicating the farms' and farmers' names and locations.

Hannaford lets shoppers make informed decisions about their produce purchases by integrating organic and conventional produce, and clearly labeling each.

Christie at PMA said there is a great opportunity for all growers to tell their story, big or small, domestic or international. “There's no better story than the produce story,” she said.

In addition to conventional and organic farming practices, there are other emerging ways that farms are addressing pesticide concerns. Integrated Pest Management (IPM) programs, for example, aim to minimize pesticide use, and can provide produce department shoppers with another option.

“It's an approach that integrates many different techniques with a goal of reducing both environmental and economic risk from pest management practices,” said Abby Seaman, vegetable IPM extension area educator at Cornell University.

Cathy Thomas, integrated pest management coordinator for the state of Pennsylvania, said the number of growers interested in IPM is increasing. “In the long run, I think growers usually find it's cheaper to grow this way because the price of chemicals has just skyrocketed,” she said, adding it's sometimes scary at first for growers to learn to scout for pests and learn the biology of pest and diseases.

While growers are using IPM, the phrase is not a common sight in produce sections. Both Hannaford and Publix said they have suppliers who use IPM techniques, but this is not advertised in-store.

Michael Rozyne, founder of Red Tomato, said the nonprofit works with growers and scientists to create a strict set of IPM guidelines necessary for the label. The groups meet each year to finalize their protocols for the year. Rozyne said that regularly revisiting their protocols allows them to raise the bar and adjust to climate change.

“It was very apparent — especially in our work with fruit growers in the East — if we were going to get product at the volumes and quality that supermarkets wanted, that we were not going to be able to work with organic fruit growers in this half of the country,” said Rozyne. “Tree fruits have more enemies than Saddam Hussein,” Rozyne later deadpanned.

Red Tomato's apple tote explains the brand's mission starting with the line, “Eco means grown on family farms; by stewards of land, water and wildlife; using natural methods and minimal spray; closing the distance from farm to table.” The group has developed 17 different bags with each grower's information on them so that shoppers know which farm their apples came from.

During the 1990s, Wegmans Food Markets, Rochester, N.Y., ran a partnership with Cornell University that marketed IPM directly. Although IPM isn't well known now by shoppers today, it was even less understood then.

“We were just so far ahead of the curve, the curve hadn't even formed yet with this,” Bill Pool, manager of agricultural production and research at Wegmans, told SN.

Developed with Cornell University, Wegmans began with sweet corn, verifying and auditing its IPM growers. Wegmans educated consumers through labels, signs, promotions, marketing and newspaper ads, all explaining IPM and its benefits, but it was tough to give consumers what Pool calls an “ah-ha” moment — where the person really understood the IPM concept.

Seaman, who was working with the project at Cornell at the time, said, “Wegmans did a great job of educating their customers and explaining what IPM was, but it's a lot of work to use IPM as the label just because of the relatively low level of understanding of the general public of what that term means.”

The IPM labeling program discontinued after several bad weather years in New York forced Wegmans to source its corn from farms across the country. Wegmans couldn't verify IPM practices at those farms.

When asked about what Wegmans is saying to customers about pesticides now, Pool said the topic is not directly broached.

“We're not talking about pesticides at all. We promote organic. We are extremely supportive continually of IPM, but we're not out there marketing it or shouting about it,” he said. “We really are very careful to not position organic or conventional, one vs. the other — against each other. We're very careful to avoid saying one is better than the other, or one is safer than the other. Or one is better for the environment than the other. We really try to provide choice for customers, and then let them decide what they want to buy.”