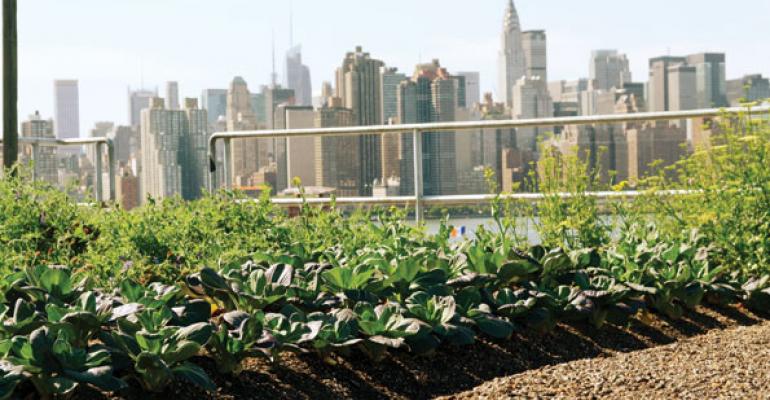 Up on the Roof: Urban Agriculture

&nbsp; Rooftop (and ground-level) urban agriculture is gaining a foothold in the industry by appealing to consumers&rsquo; desire for fresh, locally grown produce. &nbsp;

New York City’s most populous borough with about 2.5 million people, Brooklyn is perhaps best known for its many ethnic neighborhoods, as well as an amusement park (Coney Island), a bridge (Brooklyn Bridge) and an athlete who integrated baseball (Jackie Robinson). But now it’s becoming known for something else: urban agriculture.

A remarkable collection of agricultural entrepreneurs has chosen Brooklyn as the venue for rooftop projects ranging from water-based hydroponic (Gotham Greens, photo at left, and BrightFarms) to traditional soil-based (Eagle Street Rooftop Farm and Brooklyn Grange). Either way, they are growing fresh, uber-local produce such as lettuces, herbs, tomatoes and more and selling it to retailers, restaurants or directly to consumers, who are increasingly eager for locally grown foods. New York’s City Council last year encouraged the trend by passing legislation facilitating the building of rooftop greenhouses.

Shoppers and retailers are drawn to locally produced food for a number of reasons, such as supporting the local economy, reducing greenhouse gases tied to transportation and the freshness of the product. “People like being connected to the food they eat and the people who produce it,” said Kate Siskel, marketing and press associate for BrightFarms. 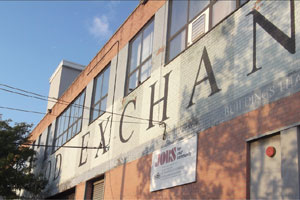 Brooklyn is not the only populated urban center where rooftop — and sometimes ground-based — localized farming ventures are taking root. From Montreal (Lufa Farms) to Atlanta (PodPonics), the trend is growing. A few food retailers are getting into the act, setting up their own rooftop gardens (see the related story “Going It Alone”).

Overall, the green roof industry, which includes farms, greenhouses and gardens built for recreation or biodiversity, last year grew by 115% in square footage in North America, said Steven Peck, founder and president, Green Roofs for Healthy Cities, a trade group based in Toronto.

“One of the segments that appear to be growing fairly rapidly is food production,” particularly high-value organic herbs and specialty crops “that don’t travel well,” Peck added. “It’s still in early days, though, and there are still some regulatory and zoning roadblocks that need to be cleared away.” Green Roofs for Healthy Cities will be holding its first Urban Agriculture Summit in Toronto Aug. 15-18.

The operation with the closest connection to the supermarket industry so far is BrightFarms, New York. Its business plan is to build hydroponic greenhouses — preferably on rooftops — throughout the country that are dedicated year-round to particular retailers; cost of a greenhouse: between $1 million and $2 million. 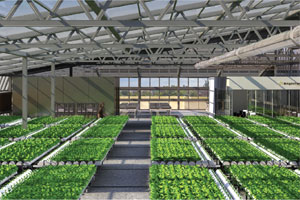 Under its product purchase agreement (PPA) with retailers, BrightFarms (left) bears the cost of building and operating the greenhouse, while the food retailer signs a 10-year commitment to buy its produce. The greenhouse, typically encompassing about one acre (about 43,000 square feet), can grow up to 500,000 pounds of produce annually, serving between five and 30 stores, depending on the product mix (tailored to the retailer’s specifications) and store volumes, noted BrightFarm’s Siskel.

The extreme proximity of BrightFarms’ facilities to consumers makes its food “thousands of miles fresher” than conventionally grown produce, Siskel said. Lettuce from California or Arizona, for example, “travels for five days to the East Coast, so it’s less nutritional and flavorful.”

Bright Farms’ produce is not considered organic due to the difficulty of certifying food grown under hydroponic conditions. But its facilities use “predator pests” like lady bugs for insect management rather than pesticides, Siskel noted.

Since March, BrightFarms has been testing its model with Best Yet Market at its Harlem store in Manhattan. The store carries baby spinach, baby arugula, fresh basil and a spring salad mix, which are grown at BrightFarms’ prototype greenhouse in Huntington, N.Y. Prices are competitive, based on reducing transportation and shrink, said Siskel.

“Customers have been very enthusiastic about these new offerings,” said Rebecca Philbert, president and chief executive officer, Best Yet Market. “Our customers are smart; they see these innovative, local seasonal products and they get just as excited as we are.”

BrightFarms’ first client with which it has signed a PPA is McCaffrey’s Markets, an environmentally minded three-store retailer located near Philadelphia; financial terms were not disclosed, though the quality of the product “has to be what we’re getting now or better,” said Mark Eckhouse, vice president of McCaffrey’s.

Eckhouse views BrightFarms as a “futuristic” concept that will help feed society by generating six to 10 times as much produce on an acre than conventional farming on a year-round basis.

The hydroponic greenhouse BrightFarms is building for McCaffrey’s, expected to open in October, is located on farmland about a mile from McCaffrey’s store in Yardley, Pa. Produce — lettuces and tomatoes — will be delivered to that store, which will in turn supply the two other stores, in Princeton and West Windsor, N.J. Time lag between harvest and store delivery: at most 12 hours, said Eckhouse.

McCaffrey’s will be replacing lettuces sourced from Mexico and Canada with the BrightFarms lettuce, and receiving new varieties of tomatoes from BrightFarms, such as California tomatoes, that it doesn’t get now because of “transportation issues,” said Eckhouse. On the other hand, its deal with BrightFarms does not preclude the retailer from continuing to source produce from local farmers, such as Jersey tomatoes, corn and fruit.

Rooftops are the preferred locale for BrightFarms’ greenhouses, because they can take advantage of waste heat from the store; but if the rooftop is not available for structural or zoning reasons, BrightFarms will build on a store parking lot or, as with McCaffrey’s, nearby. The presence of refrigeration equipment and the need to reinforce steel made building the greenhouse on its roof impractical, said Eckhouse.

BrightFarms announced last month that it will build a greenhouse in the parking lot of a store in Oklahoma City operated by Homeland Stores, which has signed the PPA. The greenhouse will open in early 2013, though the number of stores to be served has not yet been determined, said Siskel.

In addition, by the end of 2012, BrightFarms will build a greenhouse on the grounds of a warehouse operated by J&J Distributing in St. Paul, Minn. Tomatoes will be grown for J&J, which will deliver them to local stores, and a product mix will be grown for a supermarket partner still to be announced.

BrightFarms also plans to build what it calls the world’s largest rooftop garden — 100,000 square feet — atop a former U.S. Navy building in the Sunset Park neighborhood in Brooklyn, where it will produce one million pounds of tomatoes, lettuces and herbs annually for an as yet unnamed retailer; the facility will open at the end of the first quarter of 2013.

Beyond that, BrightFarms has “letters of intent” with 13 food retailers to build greenhouses, Siskel said.

Another New York City-based pioneer of urban rooftop farming is Gotham Greens, whose 15,000-square-foot hydroponic greenhouse is located in the Greenpoint neighborhood of Brooklyn. For the past year, Gotham Greens has been supplying varieties of lettuce and herbs to restaurants and 26 supermarkets in New York City, including D’Agostino, Whole Foods Market and online grocer FreshDirect. 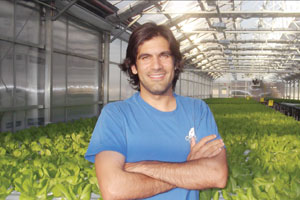 Gotham Greens produces between two and three tons of produce weekly, but “the demand has exceeded our supply,” said Viraj Puri (right), co-founder and chief executive officer of Gotham Greens, which he said is turning a profit. “We’re talking to a number of other supermarket chains and they want our products, but they need to wait until we expand our operations.” He plans to build two more greenhouses in New York City by the end of 2013, giving him about 100,000 square feet of growing space.

Hydroponics is not the only type of urban farming. Eagle Street Rooftop Farm, also located in Greenpoint, Brooklyn, is a three-year-old, 6,000-square-foot open-air farm on top of a warehouse, whose growing medium is a mixture of compost, rock particulates and shale. It sells its crops at its own weekly farmer’s market as well as to local restaurants and small neighborhood grocery stores — but not to supermarkets. In 2010 and 2011, it offered a Community Supported Agriculture (CSA) program. 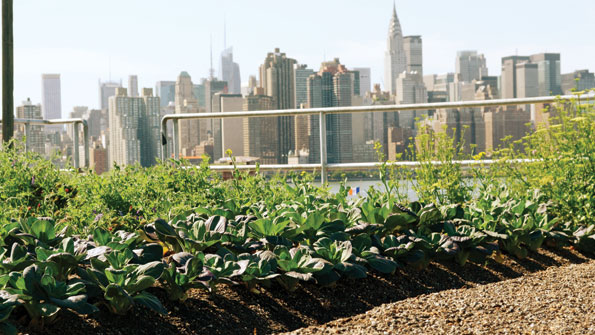 As an outdoor facility in the Northeast, Eagle Street (left) has a limited growing season. In its first three seasons, the farm grew a variety of vegetables, but this year it is focusing on hot peppers. “They love growing on the roof, don’t require much watering, and make fantastic value-added products such as hot sauce,” said Tusha Yakovleva, press liaison for Eagle Street. The farm is also cultivating leafy greens such as kale and chard and a variety of herbs.

Two-year-old Brooklyn Grange, whose founder Ben Flanner started at Eagle Street, has opened a second one-acre open-air rooftop farm in the Brooklyn Navy Yard, to go with its original farm in Long Island City. The latter farm grows 40 varietals of tomatoes, along with salad greens, herbs, carrots, beets and other crops. So far, it is selling to a few boutique retail outlets, as well as restaurants, farm stands and CSAs, “but we are certainly open to [supermarket] partnerships moving forward,” said Brooklyn Grange staff in an email.

So far urban rooftop agriculture has been propelled by third-party outfits like BrightFarms and Gotham Greens. However, a few retailers have decided to try growing crops above their stores on their own.

Rouses Market recently announced it will open an aeroponic rooftop garden at the end of May atop a store in New Orleans; it will grow parsley, basil and cilantro for sale in the store below.

Rouses, Thibodaux, La., which operates 38 stores, says it is the first grocer in the U.S. to develop an aeroponic urban farm on its own rooftop, which it calls “Roots on the Rooftop.” Aeroponics uses air or mist to grow plants without soil. “This is very cutting edge for urban farming,” said Donny Rouse, managing partner of Rouses, in a statement.

Bi-Rite Market, San Francisco, has run a year-round open rooftop garden for the past eight years, growing culinary herbs used in its kitchens, said owner Sam Mogannam. Over the past four years, the garden has cultivated bee hives that make honey sold in the store. A new store opening in late 2012 or early 2013 will have a larger rooftop garden where produce will be grown for sale in the store.

Also since 2008, Bi-Rite has operated its own two-acre farm in nearby Sonoma County where it grows a host of produce (tomatoes, peppers, eggplant, squash, beets, carrots); another four acres are used to raise cows and pigs. “We wanted to learn how to grow food,” said Mogannam. “It gives us a chance to understand what our farmers are going through.”