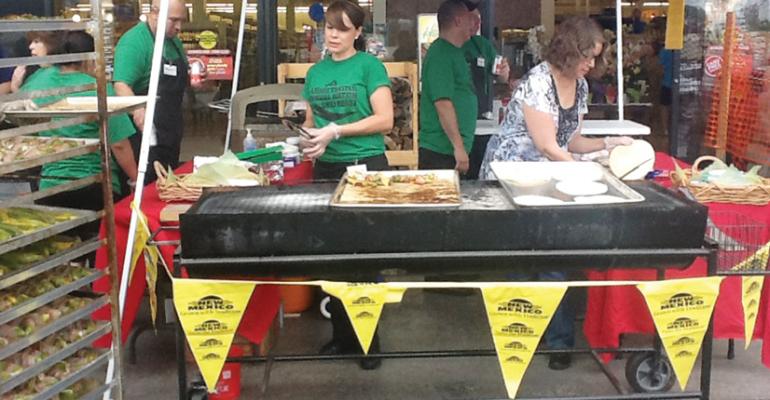 In-store Hatch chile pepper roastings and other events help build anticipation for the seasonal produce item, according to retailers.

The Hatch chile, which is only grown in the area around Hatch, N.M., is available for only a few short weeks in August and early September.

“Every store was trying to make a big event out of it, selling and sampling and just getting everyone all excited,” said Lilia Rodriguez, spokesperson for Albertsons’ southern California division.

Rodriguez said customers at some stores lined up as early as 5 a.m. to make sure they got their bag of Hatch chiles, even though events started at 8 a.m. Albertsons sold 30-pound bags for $34.99.

“And no stores ran out. Everyone had more than enough supply,” said Rodriguez.

One store event in Bakersfield, Calif., drew interest from customers as far afield as Fresno and Sacramento, she said.

For some, the roasting chiles evoke a feeling of nostalgia.

“To me it smelled like my grandmother’s house in Chihuahua, Mexico. And it took me back. I thought, oh my God, I feel like I’m back in her kitchen,” said Rodriguez.

Some stores got creative with the Hatch chiles.

“And what some of the teams were doing, for example in the service deli and the bakery, they were pulling some, and they were like making burritos, making bread — all kinds of stuff — and then just kind of selling them outside,” said Rodriguez.

Central Market has held its annual festival for the past 18 years, according to the retailer’s website.

Bashas’, Chandler, Ariz., ran different specials and events at each of its banners. For example, upscale AJ’s Fine Foods had the “Hatch Chile Culinary Adventure.”

“During our weekend roasting events, our Food City stores offer a free roast for full sacks of Hatch chiles purchased during the roasting event. Our customers appreciate the free roast,” said Jozwiak.

Along with roasted chiles, a Hen House event in Leawood, Kan., on Aug. 24 served Hatch chile sliders and wraps and gave out a free CD of recipes and cooking suggestions.