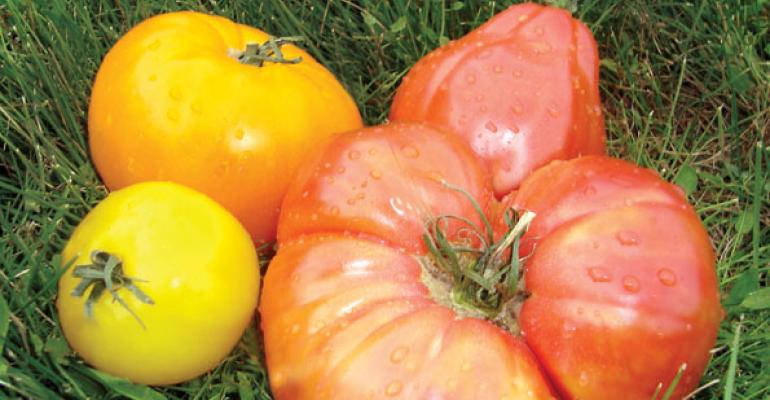 For some consumers, “heirloom” evokes the sepia-tinged idea of fruit and vegetables grown for superior taste.

Heirloom varieties offer a romance that the consumer is somehow more connected to the farm and the farmer, said Dawn Gray, of Dawn Gray Global Consulting, Vancouver, British Columbia.

Like “local” and “natural,” “heirloom” doesn’t conjure a precise definition in shoppers’ minds, and even the gardening industry doesn’t have a standard of what is and isn’t heirloom.

“‘Heirloom’ as a term and what is or isn’t an heirloom does vary a bit from place to place,” said Ball Horticultural Market Research Manager Marvin Miller. “Generally, we are talking about older open-pollinated varieties that have been passed down for generations.”

Instead, heirloom produce — varieties traditionally not used in industrial agriculture, sometimes due to their inability to hold up during shipping — gives consumers a feeling of nostalgia.

“There’s this feeling it was grown in grandma’s time or grown back when we grew stuff in the backyard or grown when things were simpler. It has more of a feeling to it than a definition,” said Kathy Means, vice president of government relations and public affairs at the Produce Marketing Association.

“We make up a little sign about the variety, its history, because that’s really the important part of the heirloom apples,” said Paul Kneeland, director of produce and floral at Kings, who added Kings tries to tie in a famous person from the past to enhance the apples’ appeal.

In 2010, Kneeland told the Wall Street Journal that heirloom apples were off to a slow start, but last week, Kneeland told SN the apples have since caught on with customers.

The Black Oxford apple, named for its dark appearance, was a surprise success.

“We really didn’t start promoting them more until 2010 when we did a real big spread on the varieties and what they are about and where they’re from. And the beauty of the heirloom apples for us is they are mostly local,” said Kneeland, who noted Kings partners with the nonprofit Red Tomato to connect with growers.

For some shoppers, the heirloom story has tangible value.

“There is almost an expectation on the part of the consumer that they’ll have to pay a little bit more for these heirlooms because they’re special, because they’re unique,” said Gray.

However, Gray noted that telling the heirloom story in the produce department actually shifts the conversation away from cost.

“That nonverbal communication that happens with the consumer in the produce department at retail [changes] to be something about flavor and uniqueness and variety and not just price.”

All heirloom varieties aren’t created equal. Varieties aren’t all inherently good tasting, so retailers should be sure to offer only the best tasting.

Kneeland described the flavor of the heirloom items he’s encountered as “outstanding,” and said 99% of the time the heirloom flavor profile will exceed any commercial fruit or vegetable.

While heirloom is traditionally associated with small-scale, local farmers, more large produce suppliers have been working to distribute heirloom varieties across the country.

Earthbound Farm, San Juan Bautista, Calif., launched a new heirloom potato last year and has offered heirloom lettuce varieties for several years, according to Samantha Cabaluna, director of communications at Earthbound, who noted these heirloom products are growing in popularity.

“Due to high demand, we have doubled the acreage for these tomatoes in the last two years,” said Kent Shoemaker, chief executive officer of Lipman.

“Most of our Vintage Ripes go to higher-end retailers, but we are selling this tomato throughout our customer base — and we expect foodservice customers to use more of this high-flavor product in the near future,” said Shoemaker.

Fine dining restaurants have certainly taken to heirloom. Restaurant menus that have at least one mention of an heirloom ingredient increased from 16.4% of menus in 2007 to 22.1% in 2012, according to information from Datassential’s MenuTrends U.S. Chains & Independents Database.

An heirloom mention on a menu could also refer to protein ingredients such as heritage pork, but Datassential Director of Market Intelligence Maeve Webster said most heirloom menu usage refers to produce.

Availability and variety likely contributed to this increase in use of heirloom ingredients on fine-dining menus, according to Webster.

“It’s not just heirloom tomatoes now; it can be heirloom turnips and heirloom carrots.”

Heirloom ingredients aren’t as common on quick-service, midscale and casual-dining menus, but there has been some growth — heirloom mentions at casual restaurants rose from 1.1% to 3.2% of menus since 2007, and from 0.2% to 0.5% at midscale and quick service restaurants.

The fact that heirloom products are typically lower priced than organic, local, sustainable and natural products helps the growth in these segments, she said.

Whether heirloom ingredients can penetrate quick-service, midscale and casual-dining restaurants remains to be seen, but Webster thinks heirloom will continue to have a presence in fine dining.

“I absolutely see it continuing to be of interest to the fine-dining operators because the nice thing with heirloom ingredients, whether it’s protein or produce or something else, they can incorporate it into other trends that they begin to leverage,” she said.

Although the word “heirloom” alone suggests a story, Means said that the trend’s takeaway is about the connection consumers are seeking with produce.

“You don’t need the heirloom varieties to do that, and we always encourage folks to connect with their customers, with the consumer, and tell the produce story because that’s very, very important.”