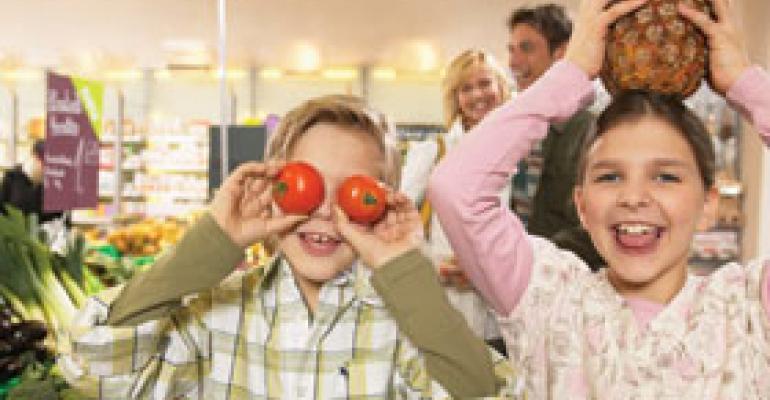 FIRST STOP: PRODUCE. Without exception, supermarket store tours almost always begin amid the vibrant hues of fresh fruits and vegetables. Whenever children are involved, making the connection between produce, diet and health becomes even more significant. They enjoy the produce department because it's so colorful, and there is so much variety to capture their attention, said Paulette Thompson, health

Without exception, supermarket store tours almost always begin amid the vibrant hues of fresh fruits and vegetables. Whenever children are involved, making the connection between produce, diet and health becomes even more significant.

“They enjoy the produce department because it's so colorful, and there is so much variety to capture their attention,” said Paulette Thompson, health and wellness manager for Ahold-owned Stop & Shop/Giant Food. “It's a fun area that's also important for their diets.”

At Price Chopper Supermarkets, Schenectady, N.Y., tours start with a produce scavenger hunt, according to Maureen Murphy, the chain's manager of consumer services and trends.

Store events that focus on children are suddenly back in vogue, after first lady Michelle Obama unveiled her national anti-obesity initiative in February. Supermarkets have been using the occasion to review and spruce up their programs, including kids' store tours. Fresh, healthful foods are a foundation of Obama's “Let's Move!” campaign.

“When anybody says they don't like their vegetables, to me that's ridiculous. You just haven't found the ones you like,” said Elizabeth Pivonka, president of the Produce for Better Health Foundation, a non-profit organization established in 1991 to help boost national consumption of produce. “The same with fruit. You don't have to like everything, just find the ones you do like.”

Produce consumption, especially among chldren, has always been a concern. A study conducted by The Perishables Group found that only 18% of parents stated their kids eat the recommended three or more servings of fresh produce a day. A more recent survey, conducted by the NPD Group for the PBH foundation, concluded that overall fruit and veggie consumption for young people under the age of 18 was up about 3%, compared with 2004, the last time this poll was conducted. It was up 7% for kids under the age of 6, and up 5% for kids ages 6-12. But — perhaps this is no surprise given the age group — consumption was down 4% for teens ages 13-17. As expected, fruit was more popular than vegetables in all age groups.

“The message is getting out there, but it needs to be consistent and strong, and that's where retailers really come in,” said Pivonka.

Earth Fare, an independent natural-food chain of 18 stores based in Fletcher, N.C., is one of those operators that is taking the call to action seriously. A day after Michelle Obama announced Let's Move!, Chief Executive Officer Jack Murphy talked about the new Itty Bitty Bites program being introduced at six stores.

“It's going to be a pretty interesting and dynamic program that's going to have a lot of humor and educational materials, not only for children, but for adults,” he said in a video blog on the company's website.

Itty Bitty Bites created a cast of characters for the program — heroes like Farmer Diggit and villains named Trans Fat Tina — and put them into comic books and trading cards to educate kids about good and bad ingredients. The chain, known for storewide bans on high fructose corn syrup, bleached flour and artificial colors and flavors, among other things, is offering kids free healthy meals every Thursday night as part of the plan.

Typically, store events and promotions are a small part of a retailer's community outreach program, but retailers know they're popular and play a vital role in bringing children — and, by extension, their caretakers — into the store. In these instances, the supermarket becomes a classroom where the retailer gets to play educator.

“Retailers don't realize the power they have at the point of purchase,” said Pivonka. “So reminding kids about produce consumption sends a real strong message.”

Strategies to get kids comfortable with fresh produce vary by retailer and the communities in which they operate. Last month, Save-A-Lot hosted a bilingual obesity awareness event for children at its newest store in Oak Cliff, Texas, a predominantly Hispanic neighborhood. Free health screenings included body-mass index exams. Cooking demos and group activities appealed to children and parents alike.

Wegmans Food Markets, Rochester, N.Y., has set up “Eat A Rainbow” sampling stations in its stores to promote the idea that everyone should eat a variety of produce colors. The chain used colored balloons to signify what was being sampled at the stations. For example, purple balloons meant that frozen blueberries were on the menu; red balloons signified that marinara sauce (over ravioli) was being served. The month-long promotion also sampled fresh, canned and dried items, as well as 100% juices.

Kids on the West Coast will find fruits and veggies approved by their peers at PCC Natural Markets, Seattle. Since 2004, the independent chain has regularly used little judges to find out which products they like best. Approved products — including fresh produce — are awarded bright orange shelf tags. A check of the Kid Picks page on the retailer's website shows that 55 vegetables have been approved (including unique items like jicama and local, organic rhubarb), while 106 fruits have gotten the thumbs up. The items are part of an online, searchable database that parents can also use to create a shopping list.

Even at their most basic, in-store produce programs for children should highlight popular choices in the department. Stop & Shop/Giant recently unveiled its enhanced store tour program with a new name: Store Explorers.

“Produce takes center stage in the tour that the kids go on,” said Thompson. “The group gathers first in the produce department, which is right there at the entrance to the store.”

The retailer even developed a new mascot, an Indiana Jones-type of character shaped like an apple, sporting a fedora and rucksack.

The Produce for Better Health Foundation has long offered a turnkey program that can be customized by any retailer. Materials can be downloaded for free or ordered. They include toolkits in English and Spanish, a guide on setting up store tours and even radio scripts for in-store announcements. The centerpiece, however, is PBH's “Fruits & Veggies More Matters” logo.

“It's a gentle reminder to do what shoppers already know,” said Pivonka. “It's not meant to make them feel guilty or to scare them into buying more fruits and veggies.”

The prompt seems to be working. According to research conducted for the PBH, 45% of moms who see the “Fruits & Veggies More Matters” sign, either on a product or in the store, are more likely to purchase that product, as opposed to 40% the year before.

Appealing directly to families is one avenue supermarkets can take in promoting their in-store education expertise. Another — of growing importance as budgets get cut and funding is reduced — is approaching schools. This was the strategy that Albertsons, Boise, Idaho, used in publicizing its Albertsons Healthy Eaters program, noting in its marketing materials that many schools “have been forced to scale back or completely eliminate field trip opportunities that give kids learning experiences that are not often possible in the classroom.”

The Supervalu-owned chain designed a program that reinforces nutrition and healthy living curricula taught in schools, and is geared for children in kindergarten through fourth grade. The tours tailor the activities to each age group, with younger ones focusing on simple concepts encouraging healthy behaviors and choices. Older children also learn how about package labels and portion sizes.

“Studies show that when children learn at an early age how to make the right food choices, they will be more likely to make healthy choices throughout their lifetime,” said Heidi Diller, Albertsons' staff dietitian, who helped design the program. “Our goal is to get kids excited about healthy eating in an up-close and personal way.”

Indeed, industry advocates point out that now might be the ideal time to reach out to cash-strapped schools.

“Some schools say they love our materials but don't have the resources to purchase them,” said Pivonka of the PBH's catalog of educational materials. “So if retailers want to adopt local schools, they can certainly do that.”

Many supermarkets, including Stop & Shop/Giant, distribute their own activity books for kids to take back to the classroom or to home. But for many youngsters, the most fun is right there in the store, noted Thompson.

“If one child tastes something, you'll likely get the other kids to join in, too,” she said. “They realize that produce isn't just peas on a plate that your mom says you have to eat, but crunchy, flavorful and fun food.”

Enough about the kids. What about moms? Do their shopping habits in the produce section make the grade? That's the question the Produce for Better Health Foundation asked in a just-released report from On Research that compares the purchase behavior of Gen X and Gen Y mothers.

Among the key findings:

* Both Gen X and Gen Y moms believe it is their role to increase the consumption of fruits and vegetables in their families.

* While both segments are generally price-sensitive, Gen Y moms are more likely to identify cost as a barrier to consumption.

* Gen X moms are more likely to purchase based on convenience.

* The Internet remains the most effective medium for communication with these two target groups.