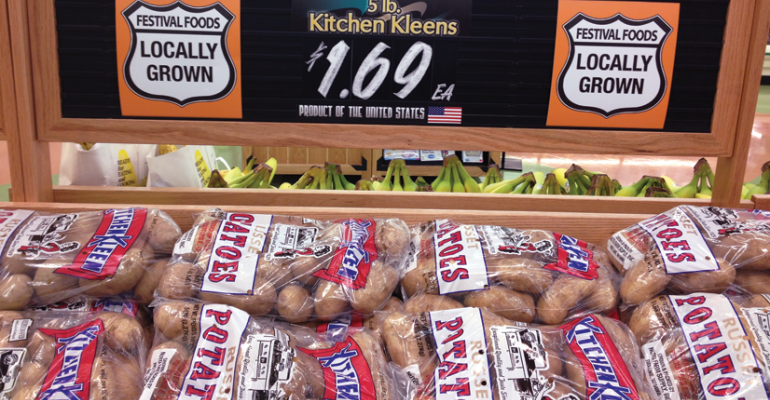 <p> &quot;Potatoes are about all we have now&quot; at Festival Foods after a freeze decimated the local apple crop.</p>
News>Retail & Financial

As winter sets in, retailers and their suppliers are keeping local produce on their shelves, thanks in part to improved growing procedures, heartier seeds, new varietals and even improved storage facilities, industry sources told SN.

Some regions’ climates provide fresh produce into winter. Strawberries, for instance, are being harvested right now in Louisiana. And brussels sprouts sold on their stalks create displays at Rouses Supermarkets that cry out “fresh” and “local,” but the Thibodaux, La.-based chain doesn’t let it go at that.

“We make sure everybody knows they’re Louisiana-grown,” Joe Watson, the 38-unit chain’s produce director, said. “We tell them with signage and in our ads, and we talk about them.”

Not only that, but Rouses has several initiatives underway to broaden its selection of local produce for all seasons, Watson said, but declined to offer any details now.

In Louisiana and even in Texas, where the temperature in the northern part of the state can drop to single digits and often does, a bigger selection of produce during the winter is available longer. The growing season in these regions, too, has been prolonged with new techniques.

“Locally, we’re in the midst of sourcing a lot of local broccoli, cauliflower and cabbage, and we work hard to keep as many local strawberries as we can,” Watson said.

They’re still growing in the open now, but “we’ve got the growing season stretched out as far as we can. If the temperature goes below 28 degrees or if it’s raining, [the growers] put plastic over the strawberries,” he said.

The plastic is held up by wires so it doesn’t touch the berries and the row ends are closed with sand bags.

“Strawberries are grown in hoops [large wire hoops, covered with plastic that keep as much as 10% of the cold out] later. The strawberry supply here will peak about Valentine’s Day, and then go on until April. Right now the strawberries we have are 100% local,” Watson said.

“Growers are using new varieties, new pest management, too, which helps stretch the season. Ten years ago we sold 8,000 to 10,000 cases of local strawberries in a season. Now, we sell seven or eight times that.”

Watson pointed out that the chain’s growth has been a factor in such an increase. “We doubled the size of our company in the last five years, but we’ve also had organic growth.”

Seasons of low supply of local produce in Louisiana are just the opposite of that farther north.

“From July to September, it’s too hot to grow anything here. We have to buy outside the state, but we try to stay on the East Coast to supplement,” said Watson.

In Texas, it’s not difficult to keep a supply of local produce going pretty much through winter.

The Valley of Texas

“We source a tremendous amount of product from the Valley of Texas,” Tommy Wilkins, produce director at United Supermarkets, Lubbock, Texas, said.

Being such a large state, Texas has a variety of climates from north to south.

On the day SN talked to Wilkins in December, the temperature in Lubbock was 9 degrees. “But our main local items right now — grapefruit, cabbage, leaf lettuce, greens, cilantro, celery — come from the Valley [where it’s warmer],” Wilkins said.

The Valley, or the Lower Rio Grande Valley, has provided United with “phenomenal cabbage” this winter, he added.

“They’re consistent, dense heads. Texas weather determines what and how long we can provide such great products.” At this point in time, cabbage and a customer favorite — Texas grapefruit — are the standout displays in United’s stores.

Wilkins emphasized that Texas-grown produce has become a larger percentage of produce the chain offers in winter, probably double what it was 10 years ago. That’s the result of diligent efforts to partner with good growers in the Valley, he said.

“We’re constantly adding local sources, and our growers are working on heartier varieties,” Wilkins said. “This is the first time we’ve had Texas red and green romaine at this time of year,” he added. Indeed, the company is getting about 50 SKUs locally during the winter months.

“Texas has become a major topic. If it is grown in Texas and of good quality, we will offer it. The limiting factor in local produce continues to be a balance of supply and growers that bring food safety with it,” Wilkins said.

All the Texas-grown products are merchandised with highly visible signs, obtained through the state Department of Agriculture, that says, “Go Texan.”

Its varied climate enables Texas to offer a lot of local produce.

“Texas, Florida, California and Arizona to a lesser extent can claim local produce most of the year, and now due to seed development, other states are getting more local products longer,” said Dick Spezzano, president of Spezzano Consulting Service, Monrovia, Calif. Previously he was vice president of produce and floral at Vons Cos.

He went on to describe the advantages of hoops and the way they increase the crop.

“They can keep 10 degrees of cold out and yet get the sun’s rays. With them we get an extra month out of the growing season. You can plant six weeks earlier, then transplant later. They shorten the germination time.”

While hoops are prevalent up and down the Atlantic Seaboard mostly for row crops, they’re even used in California for blueberries that couldn’t be grown previously.

One of the advantages of hoop growing anywhere is it gives farmers a longer yield, Spezzano said, so retailers benefit from more items and a lengthier season.

“A few years ago, the USDA had a nationwide initiative [to get growers to try hoop growing],” Diana Endicott, founder of Good Natured Farms, a coalition of farms near Kansas City, Mo., that supplies local products to Ball’s Hen House stores, and others.

“Clusters of hoops have extended the growing season. Fall crops can be harvested later. With hoops, we can plant tomatoes earlier in the season, and we can grow herbs year-round.”

Meanwhile, odd turns of weather have intervened to cut the season short for some produce.

“Winds from Hurricane Isaac cut our supply of satsumas by 50%,” Rouses’ Watson said, “and a lot of flooded row crops had to be replanted.”

Satsumas — a regional citrus product resembling a small orange — are usually available through Christmas, but Rouses sold its last one near the first of December, Watson said, and added that Rouses still has Louisiana-grown grapefruit, navel oranges and Meyer lemons.

Up North, in some states, the apple crop suffered from a surprise freeze last spring that decimated the crop in some areas, said Tad Comeau, produce director at 17-unit Festival Foods, Onalaska, Wis.

“Normally we’d still have some apples now, but in Wisconsin, Minnesota and Michigan, we had a warm spring followed by a freeze. Some growers lost 80% to 90% of their crop.”

Local onions are about to run out now at Festival Foods.

“And squash and cabbage are wrapped up for the year by now. There may be some out there, but there’s not enough for us,”  Comeau said.

“Potatoes are about all we have now [that’s locally grown] but we do have a big display with a ‘Grown in Wisconsin’ symbol right beside the price.”

Comeau said he’d have locally grown potatoes right up to summer. That’s probably attributable to better storage systems than those that were available a few years ago, he said.

In Wisconsin, where “a warm day is 20 degrees,” and the thermometer can drop to 30 below, nothing is in the ground right now. But new techniques will get crops going early.

“Some growers will start corn early under plastic, and there are some local [commercial] greenhouses that have local tomatoes even now,” Comeau said.