Bashas’ Bounces Back for 80th Anniversary

CHANDLER, Ariz. — Bashas’ here is refocusing its efforts on the customer as the family-owned chain marks its 80-year anniversary as a stronger company just two years after emerging from Chapter 11 bankruptcy.

The company has paid 100% of its financial obligations to all secured lenders and 90% of its debt to unsecured lenders, with plans to pay the balance on schedule by August of next year, Edward Basha (right), vice president, retail operations, told SN.

In addition, Bashas’ is concentrating on elevating service levels, focusing on perimeter departments and improving sourcing and pricing, Darl J. Andersen, president and chief executive officer, pointed out. “In short, we are focused on being merchants first.

“Everything we do is directed at customer service.

“As customers’ needs evolve, we’ll evolve as well in order to provide the service they deserve. But we realize it’s never going to be business as usual — that we need to reinvent ourselves constantly. And when the market changes, we want to be able to respond.” 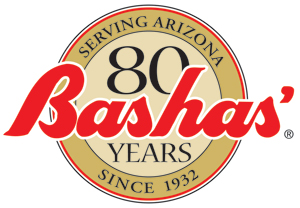 According to Basha, the company measures the effectiveness of its service levels through customer feedback and secret-shopper surveys performed by an outside company; it also uses employees to conduct surveys among their peers, he added.

The two executives declined to provide details on the other changes, citing competitive concerns.

According to an industry source, the bankruptcy was a very painful experience not only for the company and its customers but also for the Basha family.

“For the family it was a matter of pride and a very humbling experience, particularly because it meant the family had to yield some controls to the creditors. And while the family did what it had to do, it took its toll.”

What has helped sales to come back, the observer said, is the investment Bashas’ made in supporting the local communities in which it operates, as well as the state of Arizona.

“The company has built up a tremendous amount of loyalty, and people remember that, so consumers there have been like a cheerleading section on the sidelines throughout this whole process, and now they’re shopping there and supporting the hometown grocer.”

“Its in-stock condition suffered during the bankruptcy, but a new credit facility the company arranged has helped it negotiate better terms, so the out-of-stock problem has evaporated — at the same time Bashas’ has been able to upgrade stores and follow through on projects that were put on hold during the bankruptcy.

The company has also brought in a number of consultants, he added, including a new advertising agency that is getting the message out through newspaper inserts, radio and TV spots, and direct digital programs “that Bashas’ is back and there for Arizona.”

Another store — a 45,000-square-foot Bashas’ in Tempe, Ariz. — has been closed since June for a major remodeling but is scheduled to reopen in November. Although the company has completed several minor remodels, the Tempe store is its first major remodeling effort since mid-2009.

The remodeled store will feature expanded space for produce, bakery, deli, and meat and seafood; a pharmacy and wellness center; an expanded selection of organic and natural foods; a gourmet deli with New York-style pizzas and specialty sandwiches; and a customer lounge with seating, flat-screen TVs and free Wi-Fi.

It is also evaluating store locations as leases become due, Andersen added. “Each store needs to be self-sustaining — it cannot rely on other stores in the chain to be profitable.”

According to a chain spokeswoman, “Before the bankruptcy, we kept stores open that were not profitable — for example, in communities where we were the only grocery store — and those stores were often supported by other stores in the chain. Since the company emerged from Chapter 11, each store has to be profitable on its own.”

Bashas’ sales have remained steady, at approximately $1.6 billion, for the past three years, according to industry estimates.

Complicating Bashas’ expectations is the fact it emerged from Chapter 11 as the national economy was declining, particularly in Arizona, “and like many other retailers, we are still feeling the effects of the recession,” Andersen said.

The chain had over-invested in new store locations in the years before the recession, opening stores that were “bigger, prettier and had more amenities” in communities that were expected to see large population influxes, according to a company history.

As a result, when the recession hit, Bashas’ found itself with heavy debt from its building spree — including $300 million owed to secured lenders — and also from a prolonged legal battle with the United Food and Commercial Workers Union, which was trying to organize its workers.

Operating at a Profit

Bashas’ took several steps prior to emerging from Chapter 11 to tighten its belt, including eliminating a broad layer of middle management; renegotiating more favorable lease terms; cutting salaries and reducing payroll; selling liquor licenses; and putting in strict cost controls. As a result the chain has been operating at a profit since 2010, the year it filed, Basha said.

In terms of meeting its financial obligations, Andersen said Bashas’ has “validated every one of our commitments in our plan of reorganization,” including the promise to pay 100% of its debts to all secured and unsecured creditors.

“Despite advice from many experts to the contrary, we committed to repaying all our vendors at 100%, with interest plus related fees and costs — and all within three years — which is extremely rare in Chapter 11 cases,” Andersen noted.

By December 2011 — just 16 months after the company emerged from bankruptcy — Bashas’ refinanced all its secured debt with a new lender group, at which time it completely repaid its secured lenders.

That loan “dramatically punctuated the tremendous progress we had made,” Andersen pointed out. “It was one of the first tangible pieces of evidence that the plan of reorganization was working.

“That new financing package enabled us to repay our secured lenders more than a year ahead of schedule and provided the company with a revolving line of credit so it could operate more like a normal business, without having to rely exclusively on its own cash.”

Andersen had previously spent 40 years at Bashas’ before retiring in 2003 as chief financial officer to serve a mission for his church in South America. He came back a month after the bankruptcy filing with the title of chief restructuring officer and was named president and CEO in the fall of 2009.

Andersen originally said he would remain with the company for the three years it would take to see the reorganization plan through. His contract runs through the end of 2013, Basha said, “and we look forward to extending it,” he added.