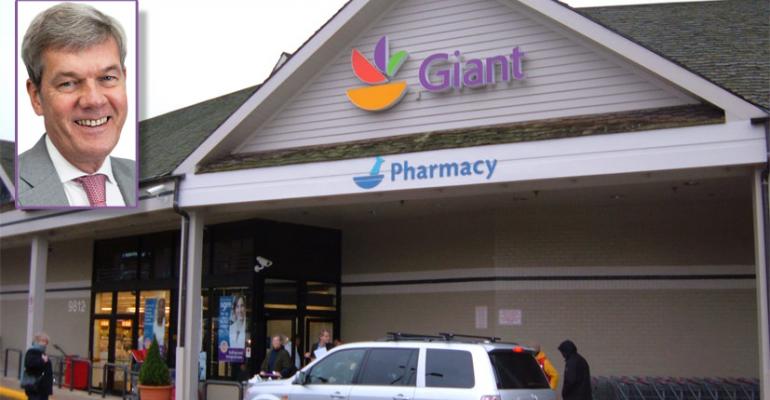 &ldquo;Connecting the customer is the most important thing supermarkets can do.&quot; &mdash; Dick Boer, CEO, Ahold

In an interview with SN editors here last week, Boer said the “Reshaping Retail” strategy he introduced shortly after taking the chief executive role at Ahold in 2011 was progressing as planned despite a sluggish economy on both sides of the Atlantic and slow-growing sales at its U.S. banners. Initiatives to invest behind customer loyalty and a broader offering — strategies Boer believes are necessitated by rapid change in consumer behavior and a rash of new competitors — will come into sharper focus in 2014 and help to take the company into the future.

“Connecting the customer is the most important thing supermarkets can do,” Boer said.

Central to this customer connection are efforts to expand U.S. online shopping through Ahold’s Peapod subsidiary, Boer said. The company last year began building dedicated pick-up points to aid efficient delivery and convenience for its shoppers. In 2014, Ahold will open a 300,000-square-foot semi-automated warehouse in Jersey City, N.J., that will help to bring more efficiency — and the expectation for a substantial increase in volume — to fulfilling Internet and mobile orders.

“This [metro New York] market is a big market online. We are building the New Jersey facility to build the volume to be able to serve a market like this,” Boer said. “We need more volume and more capacity.”

Boer said the Peapod offering in the Northeast would differ from existing pure-play grocers serving the area like FreshDirect, but he was coy as to the specific ways Ahold would carry that mission out. “You’re going to see it,” he said.

“If you look at the physical world, oftentimes your location determines your success,” Boer added. “In the online space you need to find other differentiators.”

Ahold’s big bet on online shopping is a response to what Boer feels is a major shift in consumer behavior, brought about by the growing prominence of the Internet and mobile devices, and by changes in the food retail landscape resulting in greater competition for sales. These changes are sparking investment in Ahold’s online business and customer loyalty efforts, but also in the value proposition at physical stores, which to Boer means improved fresh departments, price reductions where necessary, and a tiered private-label strategy allowing customers to “shop with the wallet you have.”

“We continually need to reinvest in our value proposition — and not only [price],” he said. “Our strategy has been clearly focused on improving our fresh proposition: How do we really improve fresh, from product, from supply chain, [and from] how we can take days out of delivery so product is fresher in stores. We’ve invested heavily in our produce departments and we see the benefits coming out, because customers like that, and are rewarding us for it.”

Boer mentioned the company was experimenting with a number of format tweaks at various stores, including a smaller Stop & Shop format offering a greater emphasis on fresh, and at least two Stop & Shop stores that have been “completely digitized” allowing shoppers to shop, scan and pay with their mobile phones.

This effort is critical, Boer said, as consumers become more used to using the Internet on the go — not only to shop, but as a means to research products and recipes, manage their health, and for routine tasks like paying for transactions and making shopping lists.

“The question is how do we connect these things together,” Boer said. “That’s the ultimate journey for us, where you can connect the customer from the supermarket environment with great fresh [product], but at the same time offer the consumer what he wants and wishes — the convenience of picking up an order wherever they are.”

Ahold in the USA

Ahold’s investments are supported by an ongoing program to realize 600 million euros in cost savings over three years, Boer said. In some cases, Boer said, the company is adding labor — for example, it recently reintroduced a labor-heavy fresh-cut produce program to its stores, but paid for it by concurrently introducing labor efficiency programs in other departments.

Low inflation and effects of higher taxes have put a damper on U.S. sales growth, with effects of competition and the sequester especially challenging at Ahold’s Giant-Landover division, Boer said. That division last month welcomed a new president, Gordon Reid.

“We had a good revival of Landover since we’ve started refreshing the stores, but clearly up until the third quarter we didn’t yet see a massive improvement,” he said. “We have to clearly focus on driving business at Landover. Because we’re well positioned there. We have great brands there, but it’s been the weakest part of our performance in recent quarters.”

Boer described the U.S. economy as resilient, and said he was more confident of a bounce back here than in Europe, but said he was unsure how soon that change will come.

“Economists are more positive for the U.S. than for Europe, [but] it’s still a fragile environment we’re in,” he said. “I’ve got a positive view of the economy in the U.S. in the coming years but I’m not sure if that reflects immediately in 2014. But there is more positive news around the U.S. at the moment than in Europe. And at that point our customers will start spending more — and spending more on food.”

While Boer has identified geographic expansion as one of the growth “pillars” in the Reshaping Retail strategy, he downplayed recent industry consolidation, saying much of the activity related to private equity interests. He said Ahold would focus on in-market and adjacent market acquisitions, where it can add scale and efficiency, and be very cautious about acquiring stores that are not in existing markets.

“It’s clear that we as a company have said our main opportunities for growth should be lying in the markets we’re in and those we are adjacent to because that’s going to create the best value for us as a company,” Boer said.

A year ago, Boer layered three brand promises — “a better place to shop, a better place to work and a better neighbor” — onto the Reshaping Retail strategy as a means to unite employees worldwide around company goals. Boer said Ahold has been measuring stores’ performance against those promises.

“At the end of the day the promises are not a theory, but something that customers should be able to feel in our stores,” Boer said. We feel we have a good strategy. It’s clear. I think that’s important for an organization to have clarity and be consistent.

“Our stores understand that there is more to do today than just selling grapes and toilet paper.”