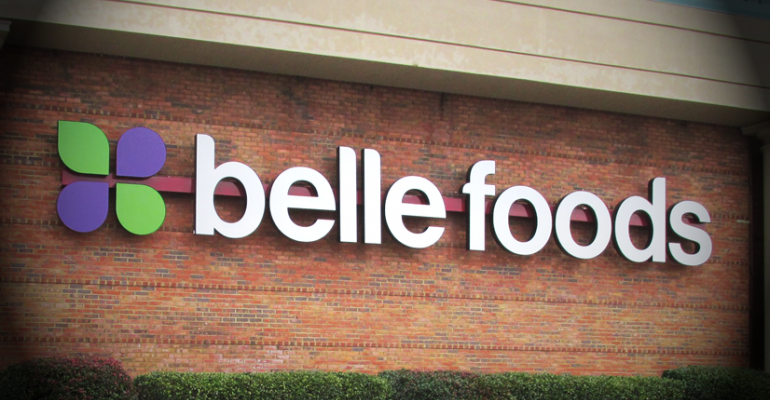 &quot;Grocery is what we know, and we think we&rsquo;ll be very happy operating a small group of stores on a long-term basis.&quot; &mdash; Bill White, 4Wall LLC

KANSAS CITY, Kan. — Members of Associated Wholesale Grocers here are remodeling and reopening the Belle Foods locations in Alabama, Georgia and Mississippi they were given the go-ahead to acquire late last month by the U.S. Bankruptcy Court.

Among the larger buyers, Homeland Stores, Oklahoma City, has already reopened most of the 11 stores it will operate, while Rouses Markets, Thibodaux, La., plans to remodel the six Alabama stores it acquired before it reopens them early next year.

Belle Foods, Birmingham, Ala., had filed for Chapter 11 bankruptcy protection in July but ultimately opted to sell the 43 stores still operating from its original base of 57 units. AWG assembled a consortium of nine members plus a smaller Alabama-based distributor and submitted the sole bid for the chain — $16.13 million.

At its height Belle Foods operated 57 stores with an annual volume estimated at $450 million — an average of close to $8 million volume per store.

SN spoke with three of the stores’ buyers.

Homeland is taking ownership "as we take inventory," a company spokesman told SN.

By early last week it had already reopened five stores, with plans to open one more each day, he said.

The stores, which range from 20,000 to 45,000 square feet, will operate under their existing banners — Belle Foods, Piggly Wiggly, Southern Family Markets and Food World.

Prior to the acquisition, Homeland was operating 76 stores in Oklahoma, Kansas and Texas.

Donald Rouse, president and chief executive officer of Rouses, said his company is renegotiating leases and expects to take ownership of the six stores, all in the Mobile, Ala., market, on Oct. 18, the same day Belle Foods is scheduled to close them.

It will begin remodeling the units shortly thereafter, although it does not plan to reopen them until after the holidays — probably at a rate of two at a time over a three-week period in January and February, Rouse said.

The Rouses name is already familiar to consumers in the Mobile market, he pointed out, because the chain operates a store 40 minutes west of there in Ocean Springs, Miss., "so the advertising bleeds into that market, and there’s already a lot of name recognition there."

Rouse said the company plans to add seafood boiling rooms, sausage kitchens and Cajun-style meats to the stores, along with expanded assortments of wines and prepared foods.

Rouse declined to discuss the volume potential of the acquired stores, though industry sources estimated the six stores should add more than $100 million to the estimated $845 million the company does at its 39 supermarkets and single convenience store in Louisiana and Mississippi.

Rouse said his company changed suppliers from C&S Wholesale Grocers, Keene, N.H., to AWG three months ago, "in part because we wanted to be closer to the warehouse that supplies us and also because we like being part of a cooperative and the contact with other retailers."

Rouses is being supplied out of AWG’s Birmingham, Ala., warehouse; it was a member of Associated Grocers, Baton Rouge, La., until five years ago, when it switched to C&S.

Among the members of the AWG retail consortium were Bill White and his son, Jeff, who acquired one store in Tuscaloosa, Ala., that was scheduled to reopen last Thursday. Bill White was president of Belle Foods and Jeff White was chief operating officer.

The Whites, doing business as 4Wall LLC, became AWG members as a single-store operator; Belle had been supplied by C&S.

White told SN the 45,000-square-foot store will be rebannered as Bruno’s — the name that formed a significant part of the Belle Foods chain. AWG was awarded the rights to the Bruno’s name in Alabama, Florida, Georgia and Louisiana by the court. White said he is seeking to acquire two more stores in Alabama.

"Grocery is what we know," he said, "and we think we’ll be very happy operating a small group of stores on a long-term basis."

In addition to Rouses, Homeland and the Whites, buyers of the stores include:

• Mitchell Grocery Co., Albertville, Ala. — an AWG competitor — which purchased six stores in northern Alabama in which AWG members had no interest.

• Triple V Inc., which acquired three stores in Tuscaloosa, and one in Meridian, Miss.

• Food Giant, which bought one store in Columbus, Miss., and one in Brewton, Ala.

• Ramey Enterprises, which acquired stores in Starksville, Miss., and Atmore and Luverne, Ala.

• Greers Markets, which acquired one store in Mobile.

• Hometown Grocers, which bought a store in Athens, Ala.

• AWG itself, which acquired single units in Enterprise, Ala., and Albany, Ga. There was also a location in Athens, Ga., whose buyer has not been determined.