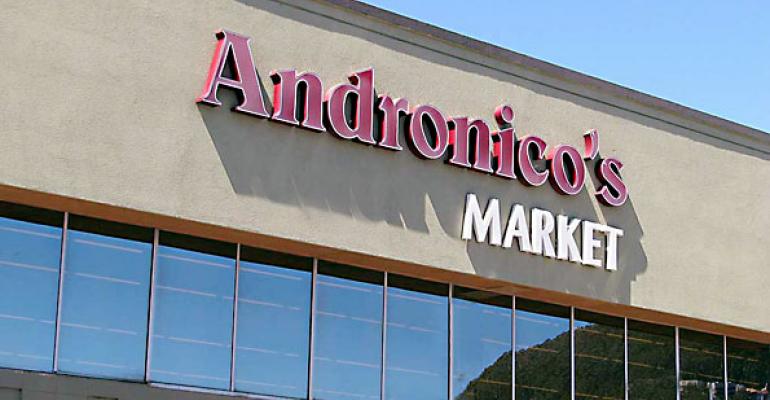 SAN FRANCISCO — A group of executives and buyers who once worked for Whole Foods Market is reporting some initial success as they to try to reinvent Andronico’s Community Markets here in its original image.

Jackson, 42, who was originally hired as a consultant by Andronico’s after he had left Whole Foods, said he decided to get back into retail full-time “because it was an opportunity to do something great with a local retailer.”

John Clougher, who was president of Whole Foods’ Pacific Northwest region, was chief executive officer of Andronico’s briefly before taking that title at A.G. Ferrari Foods, a local distributor owned by Renovo Capital, the Dallas-based firm that acquired Andronico’s out of bankruptcy last October.

In addition, five of the chain’s seven buyers are also former Whole Foods employees, Jackson told SN. Bill Andronico, the grandson of the company’s founder and its former president and CEO, is chief administration officer.

After eight months under new management, sales at Andronico’s are up close to 10%, Jackson said.

“Customers have really come back, and then some,” he said, “and we’re also starting to grow our customer base with new shoppers — all with very little in the way of marketing and nothing in terms of advertising. We didn’t even have a marketing executive till earlier this month.”

He attributed the sales increase in part to a change in the stores’ product selection: “We’ve chosen to straddle the line between natural, organic and [national] brands; and we’ve been very aggressive in expanding produce, particularly organic produce, which is important to Northern California shoppers.”

According to Matt Tesoriero, the new director of marketing — who formerly held that title at Just Desserts, a CPG company based here — “We know there’s a great deal of customer loyalty to this company. We see this as a David vs. Goliath situation where we are David — a specialty grocer offering personal customer service with a diverse range of products in every category that takes a neighborly approach to doing business.

“In the past Andronico’s had lost its way a bit. It grew really quickly, and in doing so it lost the local, grass-roots heritage it once had.”

The five remaining locations include one in San Francisco, two in Berkeley and one each in Los Altos and San Anselmo.

Under the new ownership, Andronico’s stores have been remerchandised — dropping approximately 7,000 slow-moving SKUs and replacing them with approximately 5,500 new items, Tesoriero said.

The process of remodeling all five stores over the next two years is also under way — an effort that began two months ago with cosmetic and decor changes at its store in San Francisco, which is its highest-volume unit, Tesoriero said.

Andronico’s is also engaging in “a series of grass-roots guerrilla marketing efforts” using Twitter and Facebook, he said. In addition, it is conducting interviews with approximately 100 customers at each store to determine what they like and don’t like, he said.