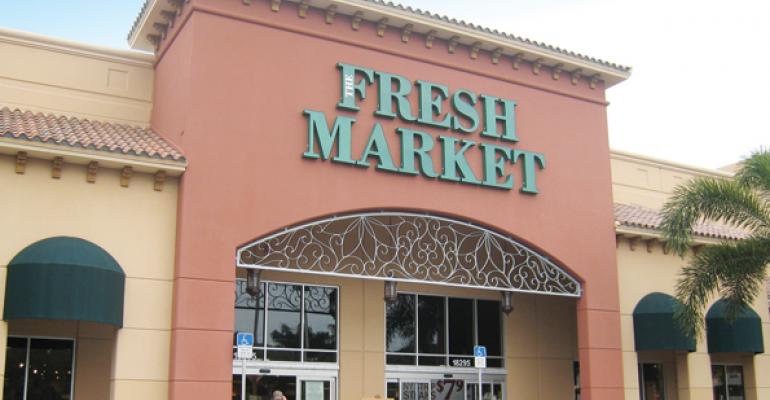 GREENSBORO, N.C. — The Fresh Market here raised its guidance for the year following the release last week of second-quarter results, which showed increased earnings and comparable sales increases of 8%.

Craig Carlock, president and chief executive officer, said The Fresh Market is doing well “because we aren’t in quite a price-sensitive position. We sell to folks who are there not for the price but for the quality, the service, the cleanliness and the ease of getting in and out. That’s what we deliver, and that’s why they’re there.”

However, Kate Wendt, an analyst with Wells Fargo Securities, San Francisco, said ongoing store expansion could force The Fresh Market to lower prices to be more competitive with Whole Foods and conventional retailers.

“The Fresh Market should benefit from the consumer trend towards healthy living and significant share-shift taking place in the grocery industry, in addition to sizable store-growth opportunities, but this is tempered by concerns that the company may start to be impacted by lower prices at key competitors as well as new-store openings in more competitive markets,” she said.

“Though this isn’t likely to show up next quarter, it bears watching,” she pointed out.

Gross margin, driven by supply chain improvements and lower shrink, expanded by 140 basis points during the quarter to 34.1% of sales; for the half, gross margin rose 110 basis points to 34.4%.

Analysts were generally upbeat in assessing the results.

Edward Aaron, an analyst with RBC Capital Markets, New York, said he believes the comp guidance implies “a noticeable deceleration for the second half of 3% to 5%, reflecting tough comparisons and some uncertainty about the macro backdrop.”

However, he said the projected numbers are “on the conservative side, suggesting [they] should continue to drift higher.”

Karen Short, an analyst with BMO Capital Markets, New York, said Wall Street’s reaction to second-quarter results — a decline in the stock price of 5.7% the day the numbers were announced — was probably due to the chain’s cautious comments on the sustainability of margin expansion in the second half and beyond.

That reaction was unwarranted, she noted, “[because] management has a very consistent track record of conservatism, so the upside to guidance is likely.”

Chuck Cerankosky, managing director at Northcoast Research, Cleveland, said the ability of The Fresh Market to attract high-end consumers should keep results strong. “It should continue to do well, particularly as it moves into California, though there are always risks in a new market from unforeseen marketing challenges,” he noted.

“But at just 21,000 square feet, these stores are usually not disruptive to a marketplace, and the break-even is pretty low, and with the company’s track record of selecting sites that work well, The Fresh Market format should continue to produce strong results.”

Carlock said the company plans to maintain an annual growth rate of 15% for the foreseeable future, with 14 stores planned for this year and between 14 and 16 next year.

“A lot of retailers get excited about what they are doing and [expand] pretty fast and then have to close some stores,” he said during a conference call with investors. “We want to be disciplined and thoughtful. Any retailer could open more stores, and so could we, but our plan is to hit 15% or so.”

The Fresh Market has opened 11 stores through the first half of its fiscal year, with three to five more scheduled for the balance of the year, including its first store in California — in Roseville, near Sacramento, set to open late in the third quarter or early in the fourth, Carlock said. The company has also begun construction on stores in Palo Alto, in Northern California, and Santa Barbara, in Southern California, he added.