BERKELEY, Calif. — Grocery Outlet, which was founded in San Francisco in 1946 but has not operated in the city since 2001, said it plans to open two stores there next year while it also contemplates further expansion on the East Coast.

The company operates stores in Northern California, Oregon, Washington, Idaho, Nevada and, since last January, in Pennsylvania, where it acquired Amelia’s Grocery Outlets, based in Leola, Pa., near Lancaster.

Eric Lindberg, co-chairman of the 181-store extreme-value chain, told SN last week the company plans to open four more Amelia’s stores in 2013, “and we plan to follow the Trader Joe’s model of staying strong in the West while building a strong platform on the East Coast, growing concentrically from Philadelphia.” 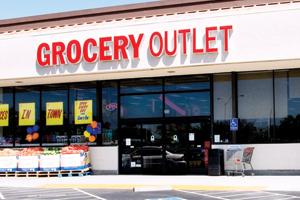 The San Francisco stores are a former Safeway location in the Visitacion Valley neighborhood and a former Cala in the Richmond district — “two areas in which we feel we will do very well,” Lindberg told SN.

The former Safeway, which has been operating as an outdoor living store for several years, is 13,662 square feet, and the former Cala, which has been closed since 2010, covers 12,360 square feet — both smaller than the chain’s average of 17,000 square feet. “But good real estate is hard to find, and we’ve been working hard to get back into San Francisco for years,” Lindberg said.

Grocery Outlet operated several stores in San Francisco until its last lease there ran out in 2001, he noted.

Of the four East Coast stores Grocery Outlet will open next year, one is the former Acme in Sharon Hill, Pa.; one is being converted from a non-supermarket operator; and the other two have yet to be selected, Lindberg said.

Grocery Outlet expanded into Texas in 2003 when it operated 17 former Yes for Less limited assortment stores that had been owned by Fleming, which went out of business that year.  The stores, located mostly in the Dallas area, were converted to the Grocery Outlet banner, but the company opted to close them after a year.

“We had the opportunity to go in, procure the furniture, fixtures and equipment and take short-term, 18-month leases before we had to sign long-term leases,” Lindberg recalled. “We opened them and ran them for about a year, but we didn’t like all the real estate, so we opted out before the 18-month time limit and let the real estate revert back to the original landlord.”

Grocery Outlet, which was founded in 1946, describes itself as an “extreme-value” retailer specializing in reduced-price brand-name product. Most of its stores are independently owned by local operators. Sales were estimated about $1.1 billion for the fiscal year that ended last December, when it had 162 locations.