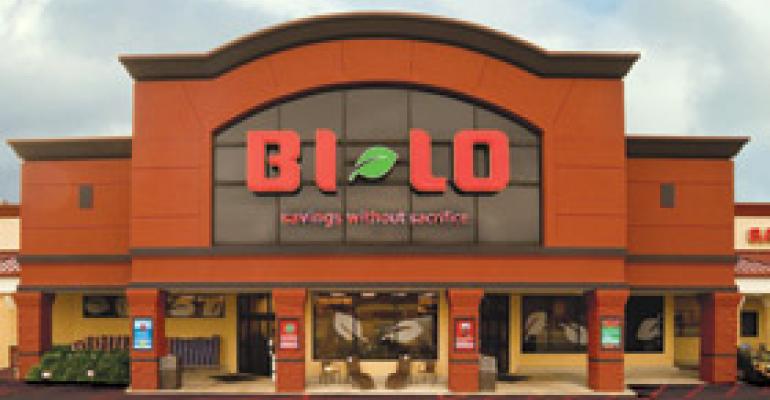 Journey to the Middle: ‘Nothing Fancy’ at Bi-Lo

At least until the recession hit a few years ago, conventional supermarket industry wisdom advised retailers to steer clear of the middle. With multiple channels and specialty concepts now honing in on the food retailing business, the reasoning went, stores that shoot for a wide swath of the market using a combination of service and price attributes are bound to lose their way. And between the carcasses

At least until the recession hit a few years ago, conventional supermarket industry wisdom advised retailers to steer clear of the middle.

With multiple channels and specialty concepts now honing in on the food retailing business, the reasoning went, stores that shoot for a wide swath of the market using a combination of service and price attributes are bound to lose their way. And between the carcasses of retailers who'd lost the pricing game to Wal-Mart and/or the service niche to brands like Whole Foods, evidence of the danger inherent in the middle — the “murky middle” as it was often called — seemed to be everywhere.

But a funny thing has happened since then. Several chains with an eye on the middle — most notably, Kroger — have thrived as consumers readjusted their shopping habits in the wake of the recession. To be sure this didn't happen without an effort by the retailers to be priced competitively and to present a credible service and freshness offering, but it also happened without an accompanying decision to abandon one niche of the market for another.

In the Southeastern states, regional grocer Bi-Lo is gaining traction on its turnaround by unashamedly aiming for the middle — and recent sales trends suggest the strategy is working. Bi-Lo is refocusing its stores around a brand message of “Savings Without Sacrifice” and backing away somewhat from attempts in previous years to “upscale” the chain. The effort has resulted in two years of same-store sales improvement — including a 3.7% gain in 2010 — following seven years of consecutive declines.

“When I joined Bi-Lo in 2005, it was told to me that you've got to get out of the middle. You either had to take it to the lowest price, or gravitate up to the best service position and almost be indifferent to price,” Brian Carney, Bi-Lo's chief financial officer, told SN in a recent interview near the retailer's Greenville, S.C., headquarters. “What we're trying to do is embrace the middle. We're not denying the fact that we are in the middle. We're not losing sensitivity to the price-conscious consumer. We understand you're watching your household budget but we don't think you have to compromise on quality on meat and produce, you receive the customer service you receive, and the shopping experience for the sake of value.”

Bi-Lo is accomplishing its mission behind a variety of price messages and savings programs and an accompanying commitment to freshness. Those aspects are coming together in a new store design showcasing the brand message. The investment in stores — $50 million this year covering around 23 store remodels — is also something new for Bi-Lo, which partly as a result of a round in Chapter 11 bankruptcy that ended a year ago, and partly because of an on-again, off-again For Sale sign on the business, has seen little new investment in recent years.

LOOK FOR THE LEAF

Bi-Lo's remodeled stores should be easy to identify, and not only because of the physical changes inside and outside the stores. They're the ones where the dash that used to go between BI and LO on store signs has been replaced by a leaf.

“While that seems like a small thing, if you think about it, it's not,” insists Mike Byars, Bi-Lo's chief executive officer. “If you hadn't seen Bi-Lo you would have to ask, what is this? A dollar store? The leaf symbolizes the belief we have in freshness and really gives the consumer the idea that we have a passion for food.”

The leaf is just one part of a remodel designed to better communicate Bi-Lo's brand message, said Byars. “We wanted to make sure our message of Savings Without Sacrifice basically screamed from all the way outside the store to inside the store to our ads and all our media. We want it all to fit succinctly together.”

Remodels start in the parking lot where signs are being changed, exteriors are getting a fresh coat of paint, and lighting is revamped to the maximum wattage allowed by local law. Inside, stores are getting new paint, new floors and new ceilings, with the latter raised wherever possible to create a roomier feel.

The store reduced square footage in Center Store to allow for larger fresh sections and more room around the checkout lines. Perimeter departments have been redesigned to accommodate branded service departments including deli, meat and seafood, with the produce department rebranded as “Walter's Produce” — Walter being Bi-Lo's longtime “picky produce guy” who assures quality and freshness.

Some of the changes at Bi-Lo — including the reintroduction of Walter, a warmer color palette, and the leaf replacing the dash — were created for the Super Bi-Lo stores that the company was building under the retailer's previous leaders from 2005. Those stores — larger and decidedly more upscale than the typical Bi-Lo, and confined to certain markets with attractive demographics — included such amenities as sushi bars and dry cleaning that are unlikely to find a place within Bi-Lo's new “Savings Without Sacrifice” brand.

Bi-Lo officials are endeavoring to build its brand upon “pillars” it calls Real Savings, Real Fresh and Real Relevant — and insist they won't run a promotion that doesn't comfortably sit upon those pillars. Officials at an annual gathering of Bi-Lo vendors last month challenged them to come up with ideas that would fit.

There is a lot to choose from. Bi-Lo's efforts on price include eight-week and 12-week extended discount programs known as Price Lock. The latter program promotes the price on huge signs hung above the aisles at stores. Bi-Lo also offers grocery and gas discounts through its Bonuscard and Fuelperks programs, a $4/$10 generic drug program, and is active with seasonal, health-focused and category-wide promotions.

“We had to improve our whole value proposition when, for the first time in 10 years, value shot up to the top of everyone's list,” said Byars.

“This was a company built off weekly specials, and we improved that through localization and by finding the right times to offer them. That resonated with shoppers. We stepped out and offered Fuelperks, which has been a great traffic builder and loyalty builder for us. We rolled out Price Lock right behind that because we knew that people really wanted to feel comfortable knowing they could find the items they buy most not worrying about them going off-sale this week. We had a 5% senior discount [Wednesdays] and we kept that. We had double coupons and we kept that.”

Programs like Fuelperks have taken a bite out of margins, officials admit, but are making a real difference in Bi-Lo's value proposition — and gaining as gas prices soar. “We talked a long time about adding Fuelperks and it wasn't viewed as a bait-and-switch where we raised prices to pay for it,” Carney said. “It was a net add.”

“We don't want to get to the point where we're either full accelerator or full brake when it comes to promotion,” he explained. “We try to stay consistent. We don't manage to a particular percent but we know what discounts we need to be in the game with the consumer. To truly have savings without sacrifice, we have got to make sure there's a return. And the more we can sell profitably the more we can invest in our stores, make sure we have the right people helping the customer.”

Officials were hesitant to quantify the results attributable to any of the new price-focused programs, noting that they have accompanied an effort around fresh they believe has also contributed to the sales increase. Key to this are department reconfigurations like Walter's Produce and a “My Bi-Lo Butcher” strategy in meat that focuses on training employees to make — and sell — custom cuts. Adding to this are a range of signature prepared food items ranging from cakes and cookies to Lip-Lickin Fried Chicken that Bi-Lo touts as exclusive brands.

“We've raised our standards in fresh, working on localization, SKU rationalization and signature items,” Byars said. “We have a lot of credit, believe it or not, around Lip-Lickin Fried Chicken. It's great chicken and it's really connected with the young consumer.”

Bi-Lo's prepared meals and its “What's for Dinner” program, which offers ingredients for a complete meal, including a beverage, at a sharp price — are more likely to offer meat loaf than steak tartare.

“We started the What's for Dinner program in the meat department because a lot of people came back to the kitchen [as a result of the economy] but didn't know what to cook,” Nashaan said. “It's nothing fancy, but it's great choices. We've avoided fancy, and we've avoided expensive. Quite honestly, that's been working for us.”

Bi-Lo's Carolinas base — still fast-growing but hit especially hard by the economic downturn — today is among the most competitive in the country, according to Jim Hertel, managing partner of Willard Bishop LLC, Barrington, Ill. Competitors include Ingles, Food Lion and Publix and discounters Aldi, Save-Mor, Wal-Mart and Save-A-Lot, which selected Greenville as the test market for its promising co-branded Rite Aid food/drug combos.

“What Bi-Lo's got is a really good handle on who their shopper is,” Hertel said. “They know where else they are shopping and have done a pretty good job realizing what they can do well that others can't as well. They play to their core shopper.”