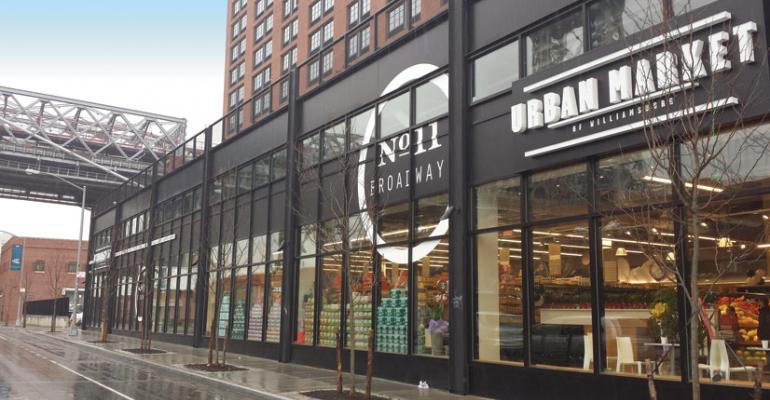 <p>The 16,000-square-foot store is located in the shadow of the Williamsburg Bridge.</p>
News>Retail & Financial

NEW YORK — In this part of Brooklyn, even the independent grocers are cool.

That was evident as officials of Key Food Stores Co-Op unveiled their newest banner — Urban Market — at a compact and stylish site in the sprawling, hip neighborhood of Williamsburg.

The 16,000-square-foot store, located in the shadow of the Williamsburg Bridge, is co-owned by Colin Xie and Jason Chung, partners in Key Food and Food Dynasty stores in Queens. Xie told SN that he developed the concept to appeal to the hip and stylish residents of the area’s newly built and developing condos, as well as to existing residents of the South Williamsburg area who have been underserved by grocery stores until now.

“This is a hybrid store. People come into a store like this and think, ‘I can’t find paper towels here.’ But here, they will,” Xie said.

Gino Palummo, vice president of business development and chief customer officer for the Staten Island-based cooperative, said the new store provides an example how the co-op is supporting the vision of its independent members. If this store is successful, Key Food could look to expand the concept to other locations, he said.

“You hold your breath every time you do something different, because you never know how things will turn out,” Palummo told SN at a store opening event earlier this month. “But they’ve done a great job putting this store together and we see this as a prototype. There’s Park Slope. There’s places in Manhattan, there’s places in Queens — throughout the five boroughs — where a store like this could work.”

The store is the 150th location in the Key Food cooperative — up from around 100 in 2009, Palummo noted. Key to the co-op’s growth has been new members, including Xie and Chung, who defected from rival independent Associated Food Stores a few years ago. Chung said IT support and availability of capital to support growth were factors in their decision to switch.

The $2.5 million store got financing from the N.Y. Healthy Food and Healthy Communities Fund.