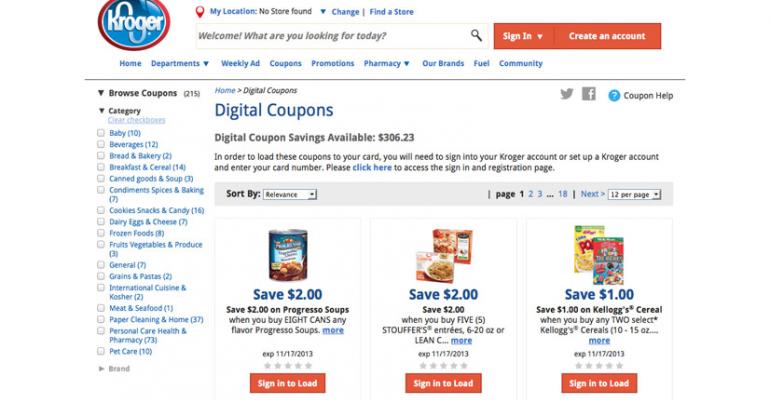 NEW YORK — Kroger Co. is embracing the growth of digital communications, but it draws important distinctions between the sharing of information online and use of the Internet to conduct e-commerce transactions.

“People sometimes use the words ‘digital’ and ‘e-commerce’ interchangeably, but they are not interchangeable,” David Dillon, chairman and chief executive officer, Kroger, told SN in an interview at the company’s investor conference here last week. “The digital world is more about communicating with customers — it’s sharing information, and moving data around. E-commerce is just a piece of the digital world.”

On the digital communications front, Kroger’s top executives explained at the conference, the company is making great strides, particularly through the use of its mobile app and the distribution of digital coupons. Kroger said about 9.7 million customers have established digital accounts with the company, and 2 million customers have downloaded the company’s mobile app in the last year. A total of 385 million digital offers have been downloaded.

The company’s digital team is an even mix of people from inside Kroger and from outside the company, and is led by a veteran of Amazon.com who also has grocery experience.

Dillon said he remains convinced that while customers increasingly enjoy the convenience of such digital interactions, they overwhelmingly remain committed to shopping in their local bricks-and-mortar supermarkets — where they interact with their neighbors and store employees — for the bulk of their grocery-shopping needs.

“This is particularly true in the smaller communities where we have stores,” he said.

Kroger has been testing an online ordering and delivery system in its King Soopers division in Denver for a few years, but it has not yet driven adequate returns, the company has said.

When analysts asked about the potential impact of AmazonFresh, Dillon said that company’s strategy — which reportedly seeks to drive revenues with competitive pricing, even if it means operating at a loss — cannot be sustained.

“Ultimately there’s a day of reckoning when the cash flow you generate matters,” he said. “It comes down to what the customer wants, and what can be provided economically.”