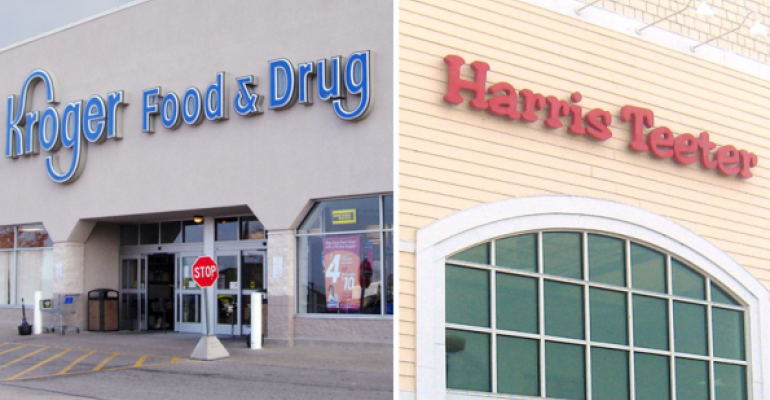 CINCINNATI — Investors seemed to like the idea of a Kroger-Harris Teeter merger as shares of both companies rose following news of the planned $2.5 billion transaction.

“We think this is a very good acquisition for Kroger, given the quality of the asset and its operations in high-growth markets,” said Meredith Adler, a New York-based analyst at Barclays.

Harris Teeter, based in Matthews, N.C., had disclosed earlier this year that it was seeking strategic alternatives, after being contacted by investment firms. Kroger had indicated during the past year that while it remained cautious when evaluating acquisition opportunities, it was considering entering new markets. If the acquisition is completed — pending shareholder approval — it would be the largest acquisition in 15 years for Kroger.

“Harris Teeter is located in the exciting, high-growth mid-Atlantic and Southeastern U.S. markets. Their store footprint is highly complementary to Kroger’s,” said Michael Schlottman, Kroger’s chief financial officer, in a conference call with analysts on Tuesday. “They share our customer-centric approach to everything we do — from store format and merchandising to disciplined execution across the organization.”

Kroger said it did not anticipate closing any stores, but noted that the two companies have some “minor overlap” in a handful of markets, including Raleigh, N.C.; Charlottesville and Hampton Roads, Va.; and Nashville, Tenn. “We are making plans now as to how we will operate in each of these markets over the long term,” Schlottman said.

Harris Teeter operates 138 locations in North Carolina, including 55 in the Charlotte area. It has another 31 locations in the Washington market. Harris Teeter also has stores several stores in “affluent vacation destinations and university communities,” Schlottman noted.

Kroger is expected to retain the Harris Teeter name and said it also planned to retain certain “key” management personnel.

Although Harris Teeter is non-union and Kroger operates mostly unionized stores, Adler of Barclays said she does not anticipate that the Harris Teeter stores — which operate primarily in non-union markets — would become organized.