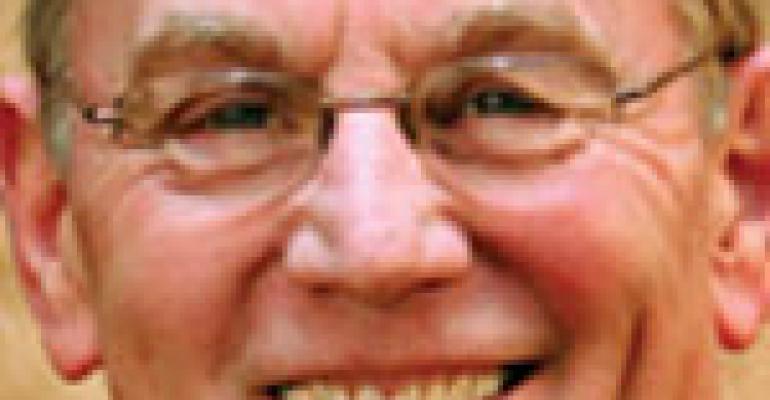 Leading From an Early Age at Festival Foods

ONALASKA, Wis. Mark Skogen never talked with his father at any length about joining the family business, his father, Dave Skogen, told SN. But when he was a 19-year-old freshman in college, he read that Wal-Mart was going to open a discount store in a new shopping center that didn't have a grocery store, and he called his father and suggested opening a supermarket there, the elder Skogen recalled.

ONALASKA, Wis. — Mark Skogen never talked with his father at any length about joining the family business, his father, Dave Skogen, told SN.

But when he was a 19-year-old freshman in college, he read that Wal-Mart was going to open a discount store in a new shopping center that didn't have a grocery store, and he called his father and suggested opening a supermarket there, the elder Skogen recalled.

That was the start of the younger Skogen's leadership at what is now a 14-store chain, based here.

As a child, Mark Skogen had worked with his sister sorting bottles and filling the beer cooler, he told SN, but once he got to college, he was too busy with other activities — though he did major in business administration.

“After college, joining the business was just the right thing to do,” he said. “I grew up in the business, and it suited me, but I never thought much about it. While I was on a summer break from college one year, the frozen dairy manager position opened up, and they threw me into the fire to do that job.”

Mark Skogen formally joined the business in 1993 and in quick order changed the company's direction, his father said.

“He saw that 70,000-square-foot warehouse stores were setting the pace in our area, while we were operating five 30,000-square-foot conventional stores, so it was at his suggestion that we began opening larger stores under the Festival Foods banner,” Dave Skogen noted.

The company, originally called Skogen's, was founded in 1946 by Dave's father Paul Skogen. Today, all 14 of the company's stores operate as Festival Foods — nine in eastern Wisconsin, four in western Wisconsin and one in the central part of the state — with estimated sales of approximately $550 million.

“After I graduated from college in 1993,” Mark Skogen said, “the company had an opportunity to buy an existing store two hours away from Onalaska in Marshfield [in central Wisconsin], and without any training, four of us — calling ourselves the ‘renegades’ — operated it and worked all the departments, and we made it work because we knew the company culture, which was to treat people — those who worked for us and our customers — with a lot of courtesy.”

The other three “renegades” included a former store manager, an executive with 10 years' of industry experience at Skogen's and other retailers, and a high school classmate who had worked for the company, Mark Skogen recalled, “and all three are still with the company.”

Dave Skogen, now 68, stepped aside as president and chief executive officer in 2006, at which point he sold the company to his son “for estate purposes.”

“Mark is a visionary and as talented a retailer as you'll find,” his father told SN. “He's passionate about the business, and he's very competitive. I've seen a lot of second- and third-generation people go to work in the family business because nothing else worked for them, but that's not the case with Mark.”

Mark, 40, gradually took on more corporate responsibilities before his father stepped down as president and CEO, “but there was never a plan,” he said. “It was more a matter of involving myself in more parts of the business.

“But once he gave me the job, my dad chose not to be involved in top-level decisions,” he said. “And fortunately, given the nature of father-son relationships, there was a general manager — Marlin Greenfield — who served as a liaison between Dad and me, which probably made things easier for both of us.”

Greenfield remains with the company as senior vice president of operations.

Mark Skogen's sister, Sue Skogen Langer, is not currently involved in the business while she raises a family, but both Dave and Mark Skogen said the door is always open for her.

Mark Skogen has two daughters and his sister has a son and daughter, so there is a possibility of a fourth generation taking over the company someday.

He said he spends his time visiting the stores in western Wisconsin several times a week to keep tabs on merchandising and maintaining the company culture; dealing with community relations and philanthropy; and nurturing relationships with customers and employees.

When Dave Skogen was growing up, there was never a question that he would take over the family business from his father, he told SN.

Skogen spent 12 years working for his father as a meat cutter, “and on my days off I would look at stores that were for sale because I had a vision we could be a bigger company.”

Paul Skogen stepped aside and put Dave in charge in 1974 — the same year Skogen's opened its second and third stores. The company closed the original store in 1975 and was operating five conventional stores in 1993, when it started to phase those out in favor of the Festival format.