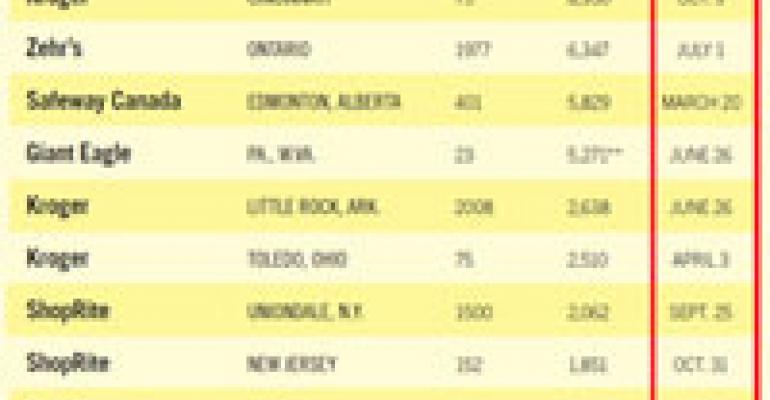 What looked to be shaping up as a good time politically for labor unions in the U.S. has been interrupted by the struggling economy and slow progress on reform in Washington, but unions are keeping hopes high. These issues provide the backdrop for nearly one-quarter million U.S. workers whose union contracts with food retailers are scheduled to expire this year. Headed by large contracts up for renewal

What looked to be shaping up as a good time politically for labor unions in the U.S. has been interrupted by the struggling economy and slow progress on reform in Washington, but unions are keeping hopes high.

These issues provide the backdrop for nearly one-quarter million U.S. workers whose union contracts with food retailers are scheduled to expire this year. Headed by large contracts up for renewal in the Midwest, Northeast, New England and Texas, the United Food and Commercial Workers union expects that 230,000-250,000 workers will be affected by this year's contracts, up from about 160,000 last year.

Sources said pension funds — still ravaged by the massive stock market losses of 2008 — will be the major issue in many of these deals, most of which were negotiated while the economy was roaring three or four years ago. More recently, food retailers have struggled amid price deflation and stingy shoppers while unions — hopeful for labor-friendly legislation in the Obama administration, including health care reform and passage of the Employee Free Choice Act — have yet to see either get the go-ahead.

In a recent interview with SN, however, Bill McDonough, director of collective bargaining for the UFCW in Washington, said he is keeping a positive outlook for negotiations this year. If times are bad, said McDonough, they at least may not be getting worse.

“While the economy has presented some challenges in the last year, we've been encouraged by some recent upticks in the economy that we hope can take some pressure off both sides,” McDonough said. “The signs are indicating that unemployment has bottomed out and may begin an uptick in certain parts of the country. There are some areas of the country where the economy is still challenging — like Las Vegas and Phoenix — but we're lucky to have already negotiated contracts there.

While it remains to be seen where pricing will go this year, sources said that even a slower rate of deflation in 2010 could be good for business. But retailers are also cautious about the prospects for recovery, saying that things could be tough until employment figures rebound. Some companies, including Safeway, elected not to provide financial guidance during recent quarterly reviews, citing uncertainty.

A frosty economy certainly impacted 2009 negotiations, although most contracts were settled amicably. Retailers Kroger and Safeway held firm on offers in Colorado despite multiple threats of a walkout by employees. The year ended with Kroger workers accepting a deal and some — but not all — Safeway workers reaching a deal. Those workers as of early last week were still without a new contract, and Safeway was still unwilling to go back to the table.

“It was a unique year,” McDonough said. “Certainly the contracts have been less than in the past because we're mindful that the economy has not been what it's been in the past. When times are better, the agreements can get better.”

Roger Robinson, president of UFCW Local 876, in a recent message to union members said he would focus on the union's contribution to Kroger's success when negotiations begin to renew their contract, which expires in June.

“It's easy to get caught up in the all the gloom and doom with Michigan's economic downturn and high unemployment rate, but all the news isn't so bleak,” Robinson said. “When we sit down at the bargaining table, we won't be sitting across from a company that is struggling like GM or Chrysler. We will be negotiating with Kroger, a profitable company with an exceptionally bright future, which puts Kroger in the fortunate position of being able to provide its workers with a fair contract.”

Pensions, however, remain a major concern for all parties. Brian Petronella, president of Westport, Conn.-based UFCW Local 371, told SN the union “is going to need substantial money for full-time pension and some money for part-time pension,” in its negotiations with Stop & Shop. Local 371 is one of several unions throughout New England whose contracts with Stop & Shop expire Feb. 20.

“Rising health care costs and underfunded pension plans continue to be important issues in our labor discussions, in addition to the increased pressures on our business that we are now experiencing,” Rodney McMullen, president and chief operating officer of Kroger, said in recent remarks to investors.

“The challenge we know is going to be out there is the pension issue — it's risen to the top of the pile,” added McDonough. “It's been challenging in the recent past and we expect that will continue. Though the [improved] returns in 2009 may take a little pressure off, it's still going to be a big issue.”

“Pension is going to be a priority issue,” agreed Pat Purcell, spokesman for UFCW Local 1500, the New York-based union scheduled to renegotiate roughly 80% of its grocery contracts this year, including King Kullen, Stop & Shop and A&P/Pathmark deals expiring in June. “We're dealing with the effects of the Pension Protection Act [the 2006 legislation which requires that organizations shore up their pension plans when they reach certain thresholds]; we're going to have to go forward with our employers and work on a plan.”

With a more labor-friendly administration and Congress in Washington, labor leaders are still hopeful that health care reform and the Employee Free Choice Act can be passed, but progress on these issues has been slow. These changes, however, would be unlikely to affect negotiations this year, sources said.

“We'll be fully engaged in the health care debate, but we're not going to hold up any negotiations waiting for something to happen,” McDonough said. “We're just mindful of the process going on.”

With regard to EFCA — referred to as card-check legislation — the UFCW has argued the measure would more fairly enforce existing labor law. Retailers have come out strongly against the measure.

Labor recently also has increasingly looked to bolster its strength through management-labor partnerships in public policy. Purcell of Local 1500 said that strategy “is a huge part of the future for both unions and their employers,” and helped influence passage of the FRESH (Food Retail Expansion to Support Health) initiatives to encourage food store development in underserved areas of New York City.

“The labor movement and the supermarkets have got to be working together helping to develop strong, good, public food policy. It's instrumental to the growth of the companies and the union,” Purcell said, adding that such efforts could result in as many as 1,500 new union jobs this year alone.

“We've got the city and the state recognizing food as a priority now, right up there with transportation and the environment. That's tremendous.”