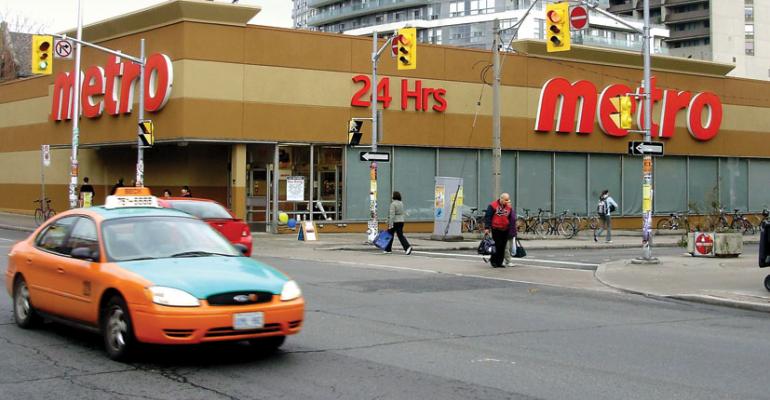 MONTREAL — Metro Inc. said last week that it would convert as many as six conventional stores in Ontario to the discount Food Basics banner and execute labor buyouts and closures at an unspecified number of other Metro locations as it adjusts to a “very intense” market sparked by new competition.

Metro will take a charge of $40 million (Canadian) to fourth-quarter earnings in relation to the restructuring, which would affect 15 stores overall, Eric La Flèche, president and chief executive officer of Metro, said in a conference call last week. Of those 15 stores, La Flèche said “half a dozen” could be converted to Food Basics in the coming months. Metro will execute labor buydowns at the other stores and close some as well, but La Flèche declined to specify precise figures.

“We looked at our portfolio of stores and after doing a full examination of the financial impacts, the labor impacts [and] the real estate impacts, we decided to … address the stores we needed to address,” La Flèche said.

La Flèche noted the company already this year converted two Metro stores to Food Basics, and said that the company would likely increase investment both at Food Basics and at Ontario Metro stores unaffected by the restructuring, particularly those with an upmarket clientele.

“Food Basics can do better,” La Flèche said in response to an analyst’s question as to its current state. “It’s very, very competitive as you know in the discount sector in Ontario. Everybody has upgraded, everybody has invested. We have also invested, perhaps not at the same pace as others. We will accelerate that pace to renovate the Food Basics stores that need to be renovated.”

La Flèche said the competition stemmed from reaction to the ongoing expansion from U.S. mass merchants Target Corp. and Wal-Mart Stores. “As more stores come on-stream, the promotional activity increases. And there are still more stores coming on-stream,” he said. “Market by market, that has a domino effect, where people react. So, it remains pretty intense. And the consumers are shopping around, very cautious, very value-oriented. So, we have to work very hard to get the full basket.”

Metro last week also announced an agreement with Target to have Metro’s McMahon Distributeur Pharmaceutique franchise in-store pharmacies at Target under the Brunet banner in the majority of Target’s store in Quebec.

“The agreement with Target provides an excellent growth opportunity for Metro’s pharmaceutical division, particularly for the Brunet banner, as it enables us to significantly increase our presence, our purchasing power and our sales potential in Quebec. In all, 18 new pharmacies, including 12 in the Greater Montreal area, will be set up by the summer of 2014, bringing the total of Brunet to 168,” La Flèche said.