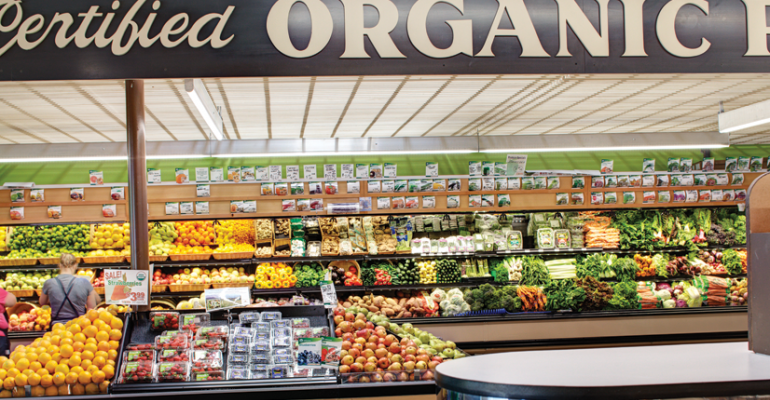 LAKEWOOD, Colo. — Natural Grocers by Vitamin Cottage posted double-digit gains in same-store sales for both its fiscal fourth quarter and year, and pledged to ramp up growth in fiscal 2013.

The fast-growing chain, which specializes in natural and organic product, said comps rose 13% for the fourth quarter and 11.6% for the fiscal year, which ended Sept. 30.

“We believe the strength of our financial results and positive industry trends have positioned us well for new store growth heading into fiscal 2013,” said Kemper Isely, chairman and co-president of the company, in the company’s first year-end conference call as a public company last month.

Natural Grocers opened 10 new stores in fiscal 2012, ending the year with 59 stores in 12 states. In fiscal 2013, the company said it plans to open 12 new stores, including one that opened in October in Missoula, Mont.

The company has signed leases for six additional locations slated to open in the current fiscal year — in Helena and Kalispell, Mont.; Denton and Lubbock, Texas; Omaha, Neb.; and Medford, Ore.

“We believe we are well positioned to fund our accelerated growth and support it for solid execution,” Isely said. “We continue to be very pleased with how well our new stores are performing.”

Sean Naughton, an analyst at Minneapolis-based Piper Jaffray, said the higher cost and revenue projections are due to “more desirable site selection.”

SN blog: A Magic Number Emerges in the Natural Channel

In addition, he said he calculated that productivity of new stores improved to 63.4% in the fourth quarter, vs. 56.2% in the year-ago period.

Natural Grocers projects that it takes four years to recoup its initial cash investment in new stores, and expects “approximately 35% cash on cash returns by the end of the fifth year.”

Total capital expenditures are projected to be between $25 million and $30 million, which the company said would be funded by existing cash and from cash generated through operations.

Natural Grocers, which operates small-format stores focused on organic perishables, natural and organic groceries and nutritional supplements, went public earlier this year, raising $58.1 million, which it said would be used in part to fund its aggressive expansion plans.

In addition to new-store growth, Natural Grocers is projecting comp-store sales gains of 7.5% to 8.5% for the year. In the first quarter, comps were trending slightly below the fourth quarter’s 13% growth rate, but ahead of the 11.6% rate posted for all of fiscal 2012, the company said.

Isely said the company’s plans to drive sales growth include pursuing bigger baskets “through nutrition education and affordable pricing,” and seeking to attract new customers through the chain’s Health Hotline and by word of mouth.

In addition, he said the company expects to be able to expand its operating margin through cost controls and by leveraging an expanded infrastructure to support growth and reduce overhead as a percent of sales.

“As we continue to experience purchasing efficiencies, some improvements will be shared with our customers,” he added.

In a research report issued after the year-end earnings call, Naughton of Piper Jaffray said he is optimistic on Natural Grocers’ ability to expand.

“We believe the company continues to capitalize on the secular trend towards healthier and organic foods in addition to expanding its square footage at an impressive rate, which should continue and drive earnings higher at a meaningful clip,” he said.

He noted that the company’s double-digit comp-store sales performance was encouraging, especially given that it was primarily driven by traffic gains and that even stores that are 5 years old or more posted comps of 7.6% in the fourth quarter.

Gross profit increased 29% to $26.4 million, and gross margin increased to 29.3% of sales from 29.2%. The company attributed the increase in gross margin to a decrease in occupancy costs as a percentage of sales at comparable stores.

For the year, comparable-store transaction count increased 7% over the preceding year.

Excluding the stock-based and incentive compensation expenses associated with the IPO, administrative expenses as a percentage of sales were 3.4% vs. 3.9% in the prior year.

In a fact sheet about the company published on its website last week, Natural Grocers detailed some further information about its store format and its financial performance:

• Approximately one quarter of each stores’ selling square footage is dedicated to dietary supplements.