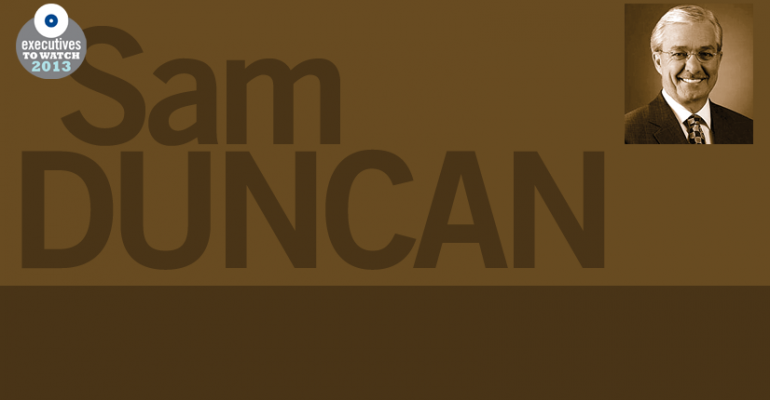 Plenty of Work Ahead at Supervalu for Duncan

&ldquo;I have three operating principles &mdash; integrity, accountability and a sense of urgency, and looking at the P&amp;L statement, I can tell you we will operate for sales and cash. And we are here for the long haul &mdash; we&rsquo;re not going away.&rdquo; &mdash; Sam Duncan, president and CEO, Supervalu

MINNEAPOLIS — Sam Duncan has his work cut out for him.

As the newly elected president and chief executive officer of Supervalu here, he must figure out how to get the company moving in a positive direction on the top and bottom lines.

He said he believes he is ready for the task. “We have a lot of work ahead of us, but I’ve had 18 months in retirement to recharge my batteries,” he said earlier this month in a brief talk to a group of Supervalu customers during the National Grocers Association convention.

“Our focus will be on helping you grow your business — you will be hearing that a lot from me,” he said.

“I have three operating principles — integrity, accountability and a sense of urgency, and looking at the P&L statement, I can tell you we will operate for sales and cash. And we are here for the long haul — we’re not going away.”

The need for an immediate change in direction at Supervalu was deemed so important that the company’s directors installed Duncan in the job nearly six weeks before he was scheduled to take over “so he can start to refine and … implement plans for the business,” the company said.

Duncan had originally been set to join Supervalu in mid-March, when the company is scheduled to complete its tender offer for up to 30% of its common stock to an investor group led by Cerberus Capital Management — at the same time Cerberus is expected to conclude its transaction to buy five major supermarket banners from Supervalu.

But even taking over six weeks early, Duncan was already familiar with the challenges and opportunities facing him.

Duncan said he initially got involved with the Cerberus group last July as a result of its partnership with Robert Miller. Duncan worked for Miller at Albertsons years ago, and when the tender offer is done, Miller will become executive chairman of Supervalu.

“I looked at the company and how it operated, and when I came on as a consultant in January, I got to see the operation more clearly,” Duncan said.

“Having done the due diligence, I am in awe to realize how consistent the wholesale business has stayed, despite all the confusion that was going on [elsewhere in the company].

“So I’m very excited about the opportunities I see at Supervalu, [though] we have a lot of work ahead of us.”

Each segment comes with its own set of challenges and opportunities, industry observers told SN, contributing to the over-arching challenge of turning around a company that has seen sales, profits and identical-store sales dropping for several years.

John Heinbockel, managing director for Guggenheim Securities, New York, said he expects Duncan to “hit the ground running with a sense of urgency” on such issues as devising a long-term financial plan for the company; developing a new organizational structure; determining where to cut costs; and figuring out how to turn Save-A-Lot around.

“If Supervalu is to grow EBITDA over the longer term, it will have to be largely driven by Save-A-Lot, since food wholesale is a very low-growth business and the traditional food retail banners have more limited growth prospects than Save-A-Lot,” Heinbockel explained.

However, she said she believes Supervalu can get turned around and become profitable again, “particularly because it’s unloading its debt and getting rid of the multi-employer pension expenses [by selling the larger chains].”

Short said autonomy at store level may be something Duncan considers, pointing to the success Miller has had running Albertsons LLC.

“Miller’s success there has been based on a willingness to give more autonomy at store level to personalize the shopping experience,” she pointed out. “It’s all about the details at store level, and that’s the approach I would expect Duncan to follow.

“But the biggest overall issue for Supervalu is costs,” she pointed out. “When it was operating all the retail assets, including the ones it’s selling, it strove initially to decentralize the operations of each banner and move them to a single operating system to achieve efficiencies. But it never achieved that, and it’s a moot point now.

“One of the areas in which Supervalu is likely to cut costs is labor. It’s also likely to try to do more streamlining in purchasing and in vendor relationships. And the IT function has to come into play at some point.”

Short said she believes Supervalu’s remaining retail assets are stronger than the retail chains the company is selling and that independent business seems to be stable.

“One obvious challenge ahead involves the supply business. Getting product costs in line would be a major issue,” she said.

At Save-A-Lot, the negative comps are a result of changes in the stores’ offerings and price points, she noted, “and Supervalu needs to get pricing in line at the licensed and corporate-owned stores.”

According to another observer, Duncan’s biggest challenge is to help Supervalu determine what it wants to be going forward.

“When it bought Albertsons [in 2006], it wanted to become a retailer,” he pointed out. “Now it’s back to what it was before that purchase, and revenues have been shrinking everywhere — in wholesale, in its independent business and in Save-A-Lot. So the challenge is, how will it relaunch growth?”

The observer said he did not know how Duncan might find ways to grow the company.

“Wholesale is a shrinking business, which is why Supervalu got into retailing in such a big way. But though wholesale is a high cash-flow business, it’s not clear how much emphasis the company will put on it in terms of making it a growth component.

“Under Duncan, Supervalu could strive to make its distribution more efficient or put more automation in its warehouses or simply go after getting more business in the door.

“As for the independent retail stores, the fact that Cerberus will have a large ownership position means it may consider selling any businesses that don’t grow rather than spending years trying to turn them around.

'Save-A-Lot Can Be Saved'

“Regarding Save-A-Lot, the situation there has worsened in the last few years, despite the fact the tough economy should have provided all kinds of opportunities for it to grow and prosper. But it’s operating with negative comps, and that just seems at odds with what it’s trying to do as a retailer.

“However, I would have to think Save-A-Lot can be saved. There may be a morale problem among some licensees, and overcoming that could be an important point going forward.”

Neil Stern, senior partner at McMillanDoolittle, Chicago, also said Save-A-Lot may be a high priority for Duncan. “With a more focused company, the new management has a great opportunity to improve the sales results at [Save-A-Lot],” he said.

“And Duncan is a very seasoned executive who has been part of two turnaround companies, so in addition to his supermarket experience, he should do well bringing an urgency to making changes.”

Duncan has more than 30 years of experience in the food industry, starting as a courtesy clerk at Albertsons in 1969 and working his way up to become the chain’s director of operations.

He left the food industry in 2002 to become president and CEO of ShopKo Stores, Green Bay, Wis., for three years, after which he moved to OfficeMax, Itasca, Ill., as chairman, president and CEO from 2005 until 2011.

ShopKo and OfficeMax were facing financial challenges when Duncan joined them, analysts said.

According to Short, Duncan was hired by ShopKo in part to boost traffic by installing more food in the company’s department stores and rural dollar stores, “but he was also there to cut costs and install more efficiencies.”

An analyst familiar with Duncan’s time at OfficeMax said his work there involved reducing costs, “and under his leadership OfficeMax made progress as a credible, sustainable retailer, but that progress was short-lived and seemed to be more window-dressing than a long-term solution.

“There was a strategic plan in place that involved cutting costs and bringing margins up, but many of the programs seemed like temporary measures just to get the business going, and when Duncan retired, a lot of problems were left that his successor had to fix.”