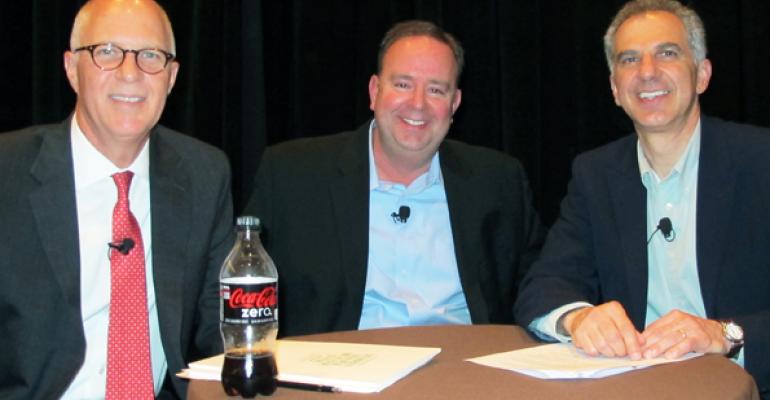 ORLANDO, Fla. — Having a corporate presence on social media presents challenges not only in terms of training those employees who post on behalf of the company, but also in making sure that those agents have access to accurate and appropriate content to respond to customers.

That was one of the learnings shared by Mark Irby, vice president of marketing at Publix Super Markets, during a presentation to a packed room on the opening day of the Food Marketing Institute's Future Connect conference here on Monday.

“Content is absolutely key,” said Irby, who is a member of the Coca-Cola Retailing Research Council, which presented the session. “Content means being able to talk with customers about a topic, about issues, about things that are on their mind. If you are not prepared to have conversations about those topics and add value to that conversation, without the conversation being all about you, then you are irrelevant in social media. That is a huge challenge.”

He said companies that participate in social media should be prepared to think through the processes that must be created in order to present their brand in the proper light to consumers through these types of media.

“What is relevant content? Where does it come from? Do we have the knowledge to create that content? How do we get it out in front of customers?” Irby asked. “Organizationally, that changes processes.

“For those social media agents, those first responders, they can’t be expected to know everything at all times, but you have to be able to inform them somehow, so they can craft timely and credible responses on your behalf. So there is a huge process problem that has to be solved.”

Irby, who described Publix’s approach to social media as cautious — the company monitored its Facebook presence for a while before it only recently opened a corporate Twitter account — also stressed the new dimensions of timeliness that are involved with social media.

“We are not in the letter-writing business any more,” he said.

Timeliness means not only being able to respond quickly to customers, but also being aware of what customers are concerned about in the broader sense of what is happening in the world. If customers were scanning Twitter and Facebook for news updates immediately after the recent Boston Marathon bombings, for example, that might not be the best time to push out a product marketing message, he explained.

He also noted that while customers have been mostly positive in their feedback about Publix on social media, the company does take a measured approach to responding to negative comments. Sometimes the company’s many fans will respond more forcefully in Publix’s defense that Publix itself would, he explained.

SN Blog: What Future for Food Industry's Next Leaders?

Also speaking on the panel, Tim Massa, vice president of talent development at Kroger Co., said the Cincinnati-based company has been leveraging social media internally to share knowledge among employees, and has begun to use it as a recruiting tool for attracting new employees as well.

Kroger has in the past year rolled out a platform it calls “Yodel” — a version of Yammer, the internal blogging and content-sharing service. On it, employees can form teams, affinity groups and other networks to share information. The concept began as a weekly blog post from the company’s chairman and chief executive officer, David Dillon, which attracted comments from employees throughout the organization, some of which were anonymous.

“That was a good barometer about what our associates were feeling, especially those at the hourly level,” Massa said.

Now, with Yodel, he said, employees seem to like to have their name attached to their posts, and enjoy creating and sharing information with their counterparts around the company.

In addition, Massa said Kroger s ramping up its efforts to use Facebook as a recruiting tool across its 18 divisions and its manufacturing and distribution groups.

“We are trying to get up to speed on Facebook in each of our divisions, and establish a presence, and then begin to look at how we can recruit using that platform as Kroger Co. and its banners,” he said.

In leading off the session, Michael Sansolo, research director for the CCRRC, outlined the seven-part research study conducted by that group, called “Untangling the Social Web.” The report, available at www.ccrrc.org, details the steps companies can take to establish a social media presence.

“The whole notion of communication and media has changed,” he said. “This is where the world is going.”

Among the keys to success in social media are listening carefully before engaging, being interesting and entertaining — Sansolo cited Lady Gaga as an example of a successful social media “brand” — and being authentic and transparent.