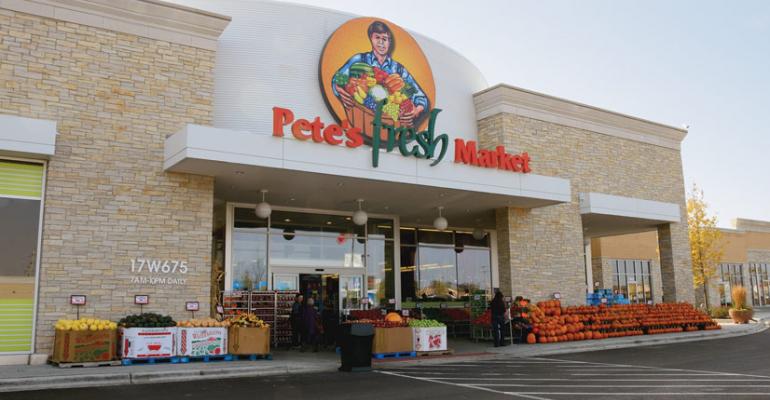 At least a half-dozen former Dominick’s stores in Chicago have been snapped up by independents.

“The diversity of Oak Park is very attractive to us,” said Stephanie Dremonas, executive officer at Pete’s Fresh Market, in an interview with SN. “The community has been very receptive.”

An opening date for the 45,000-square-foot store has not been set, but Dremonas said it would probably be before the end of the year. Plans for the renovation are still in development.

The new site is smaller than most Pete’s Fresh Markets, which range from 55,000 to 65,000 square feet. It will have all the same departments that are in larger stores, but it will be run “leaner,” said Dremonas. Depending on the demands of the community, some departments may be larger while others are reduced in size.

“We want to do it right for the neighborhood,” she said. “Every store fits the community needs.”

Dremonas said that Oak Park was selected because it gives the retailer the opportunity to serve a more economically diverse community.

Pete’s Fresh Market is a family-owned, full-service supermarket that currently has nine stores, most of which are located on Chicago’s South Side. Dremonas said that Interstate 290, which connects the western suburbs to the city, has been the unofficial northern border for the retailer’s expansion. The Oak Park site will be the second Pete’s Fresh Market located near this corridor.

“There are endless possibilities on the North Side, but for the time being, we’re working on the South Side,” said Dremonas.

Keep up with Dominick's news in SN's free daily e-newsletter

As a privately owned company, she said that the retailer does not have to answer to stockholder demands for expansion, but when an opportunity for growth appears, it can move quickly.

This is the second time the retailer has had a presence in this western suburb. The previous store was closed.

Pete’s Fresh Market began business in the early 1970s as a produce stand and still calls itself the “King of Produce.” In addition to fresh fruits and vegetables, stores also include bakeries, coffee bars and gelato bars.

The stores being acquired by Joe Caputo & Sons are in the northwest Chicago suburbs of Northbrook, Arlington Heights, Des Plaines and Elk Grove Village. Conversion of the Northbrook and Arlington Heights stores is expected to begin immediately with anticipated opening dates in late March/early April. Plans call for the Elk Grove Village location to open shortly thereafter, and for the Des Plaines location to be open by year-end.

Sidebar: Closings give a bump to rivals: Reports

Many independent grocers in Chicago are seeing a boom in business in the wake of the Dominick’s closings, according to local reports.

Zak Segev, co-owner of Devon Market in the Rogers Park area, where a Dominick’s has closed, estimated that his store has seen a 20% increase in sales, according to the local website DNAinfo.com/Chicago.

Others told the website that they had seen even higher increases, and some also attributed the gains to the cold snaps that hit the region in January, causing people to stock up on groceries.

Safeway announced last year it was withdrawing from the Chicago market and seeking buyers for its 72 Dominick’s stores. Of those, less than half had been acquired by early February, and many of the acquired stores — including most of the 11 acquired by Milwaukee-based Roundy’s for conversion to its Mariano’s Fresh Market banner — remained closed. Whole Foods Market on Monday announced the acquisition of leases for seven locations, which will remained closed in 2014 and reopen in 2015.

The four locations acquired by Albertsons’ Jewel-Osco banner — two in Chicago and one each in Glenview and Homer Glen — closed briefly for conversion but quickly reopened.

A task force was created to find buyers for the 50 or so Dominick’s locations that remained unsold.