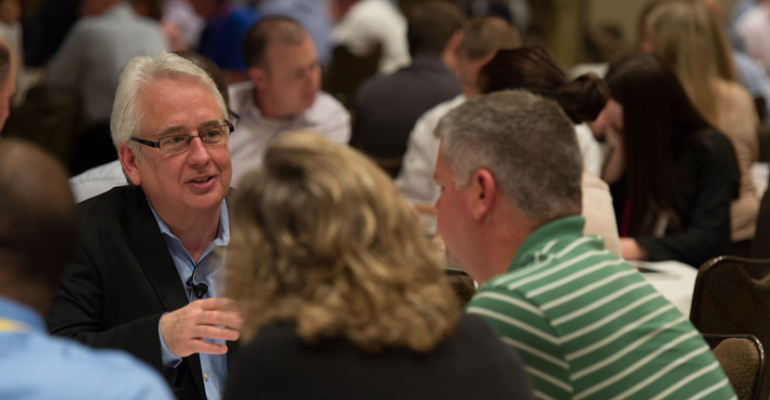 ORLANDO, Fla. — Retail and wholesale executives at Food Marketing Institute’s Future Connect conference here last week said they support the return of the annual traditional FMI Show in 2014, and believe Future Connect will continue to thrive as a development and education tool within FMI.

Next year’s show will be titled “FMI Connect, The Global Food Retail Experience.”

“The industry needs an annual event where everyone comes together to address their needs and engage in networking,” said Jerry Garland, chief executive officer, Associated Wholesale Grocers, Kansas City, Kan. “It used to be the industry’s big event, but now there are 20 or 30 meetings and conferences taking everyone in different directions.”

Garland said AWG plans bring a broad range of employees to next year’s FMI Show in Chicago, from human resources to legal.

“It was a problem that everything got split up,” he said. “It will be good to have everyone together in one place, and also to see what’s new [in terms of product] — that’s important.”

Garland said he believes Future Connect, which was launched in 2009 as an alternate-year educational conference geared at developing up-and-coming leaders within organizations, should continue.

“I think if you are going to have leaders for tomorrow, you need this kind of conference,” he said.

Garland added that he has found that sending employees to Future Connect is a more cost-effective way to train workers than to attempt similar training internally.

“We tried to do this inside the company, and it’s more expensive,” he said.

Randy Edeker, CEO of Hy-Vee, West Des Moines, Iowa, also said he is supportive of the return of an annual FMI Show.

“It’s great to have that exposure to everything in one place,” he told SN. “It’s great for young people to be able to see it — and it’s fantastic to be in Chicago.”

Hy-Vee, which brought 110 employees to Future Connect, used the event as a mentoring and team-building exercise, with senior executives taking responsibility for working closely with small groups of lower-level employees, and organizing events each evening for the group.

“I think the FMI team has done a phenomenal job of understanding what we need,” he told SN. “It was wonderful to have Future Connect here, and next year it will be great to have a traditional show.

“I think the team at FMI has figured out how to merge the two shows, and it will be wonderful,” he said.

Jerry Golub, president and chief executive officer, Price Chopper Supermarkets, Schenectady, N.Y., said he believes bringing back a yearly trade show is “a good idea, but it needs to be supported by both retailers and suppliers.”

He also said he supports an ongoing education and development effort like the one presented by Future Connect.

“We really need to figure out how to work this leadership development activity into the educational cycle,” he said.

Golub, who said Price Chopper sent about a dozen, mostly mid-level employees to Future Connect this year, said Future Connect “is a great event to bring people who you want to have exposure to training and development tools.

“They always come away energized, and they bring that energy back with them. They also appreciate that the company is investing in them.”

In a previous interview with SN, Leslie G. Sarasin, president and CEO of FMI, said the association was still seeking to determine what format Future Connect would take in the future. The traditional trade show is returning, she said, because of a need to bring retailers and suppliers together annually for face-to-face interaction and networking.