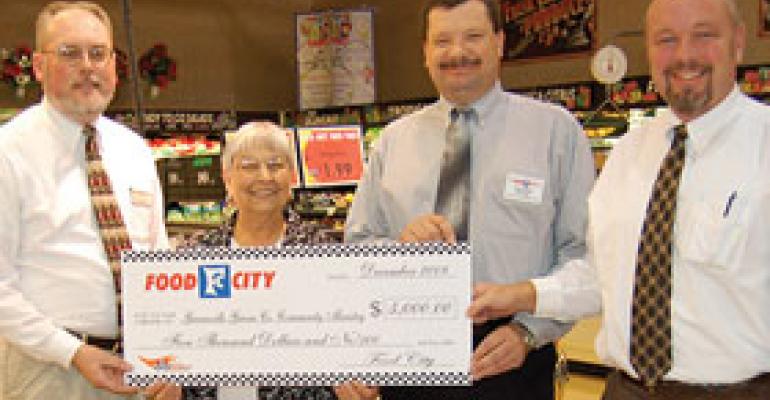 Retailers Support Local Charities With Food For All

Who says it's tough to make money in the supermarket business? Right now, in more than 6,000 grocery stores around the country, retailers are helping local charities in their areas raise millions of dollars with very little effort. By simply placing displays at the checkout that encourage customer donations, retailers who participate in Food For All are generating thousands of dollars in contributions

Who says it's tough to make money in the supermarket business?

Right now, in more than 6,000 grocery stores around the country, retailers are helping local charities in their areas raise millions of dollars with very little effort.

By simply placing displays at the checkout that encourage customer donations, retailers who participate in Food For All are generating thousands of dollars in contributions from their customers who scan the UPC slips at checkout to have small amounts — from $1 to $5 — added to their grocery bills.

With the current high rate of unemployment, the donations, many of which go to local food banks, are especially needed.

“I don't think there's a more important time than today that companies like ours can be involved in Food For All, because there's a lot of need out there,” said Steve Smith, chairman and chief executive officer of K-VA-T Food Stores, Abingdon, Va., and vice chairman of Food For All. “Being a grocer, we see it first hand. We see folks that have lost jobs, or have lost incomes in their families, and they need a little help, especially this year and into 2010.”

K-VA-T brands its Food For All campaign under the “Race Against Hunger” theme, which allows it to tie into NASCAR sponsorships at nearby Bristol Speedway and garner support from racing celebrities, such as Rusty Wallace.

K-VA-T also works with manufacturers who wish to tie into the campaigns. Kellogg Co. and Miller Brewing are both supporters of Food For All in partnership with K-VA-T, for example.

“It obviously helps sell their products, and in exchange they make donations to Food For All,” Smith explained.

K-VA-T has been involved with Food For All since 1992, but it stepped up its involvement with the organization heavily in 2004. Since that time, it has raised more than $1.3 million in partnership with Food For All.

At the same time K-VA-T is conducting its annual holiday promotion with Food For All, it also is distributing funds to local charities. This year it is presenting more than $215,000 to local aid groups.

It has set a goal of raising $2,500 per store this holiday season, or about $370,000. The money raised, other than the percentage given back to Food For All, stays within the district. K-VA-T has eight districts of about 12-14 stores each, and each district determines how the funds should be spent locally.

“We have decentralized it,” Smith said. “They spend it where they want and how they want to — they know the district much better than we would here at headquarters.”

To encourage cashiers to participate in telling customers about the opportunity, K-VA-T rewards those who solicit the most donations. For example, a cashier who raises the most money for Food For All one week might be allowed to pick their own schedule during Christmas week.

IGA has been supporting programs like Food For All for years through local pantries and soup kitchens, he pointed out.

“But what's particularly special about Food For All is that all the money collected in a community stays within that community and is channeled back to hungry people in that community,” he explained. “When IGA retailers collect money through Food For All, they determine where the money should be spent, which means if they support a particular food bank or church group or the Salvation Army, that's where the money goes.”

IGA encourages its licensed retailers to participate in the programs Food For All offers, though it doesn't require their involvement; it also allows individual retailers to adapt the program to fit their own needs, Batenic said.

“Collecting money to donate to the community is part of our brand message,” he explained. “Our store operators have always had a history of giving back to the communities they work in and serve, and all of them view that as a basic part of their operating procedure. Food For All has simply formalized the effort in a broad-based manner.”

Batenic said he expects donations to be strong this holiday season. “Helping others is the American way, and when times are tough, as they are now, people tend to help each other more than in better times,” he noted.

He said the option Food For All gives consumers of donating $1 to $5 “seems to work best because those are amounts most consumers are willing to add to their grocery bills, whereas asking for $10 or more might give more people reason for pause.”

Batenic said he also appreciates Food For All's low operating costs, which means “a maximum amount of money goes out to charities.”

Miguel Alba, a spokesman for Jewel-Osco in Chicago, said the chain, which is owned by Minneapolis-based Supervalu, works with Food For All year-round to raise funds for local hunger-relief groups.

“It's very easy to work with, and customers respond very well to it,” he said. “They deliver the displays directly to the store, and we just place the information at the checkout counters.

“People respond well, the promotions are well-designed, and the messaging is continually updated, which keeps it relevant for customers.”

The chain supports a range of charities through the Food For All Partnership, he said, focusing primarily on local food pantries.

“At Jewel-Osco, one of our key missions is hunger relief,” he said. “We are a grocery store, so it is perfectly in line with what we are doing.”

The chain has raised about $750,000 through Food For All in the last five years, he said. A contributions committee helps determine which local aid organizations receive the grants.

In the Miami division alone, it raises more than $1 million for 40 local organizations, focused on job creation, hunger relief and self-help, she explained. Many of the donations go to local food panties or to the Salvation Army.

“There are many niche agencies that see the benefit as well,” she explained, “We work with many of the same ones year after year, because we believe in those long-standing relationships. But by raising additional money, we can add additional charities to the recipient list.”

Food For All runs a six-week program at Publix, from November through the holidays, and supports other charities in other ways throughout the year.