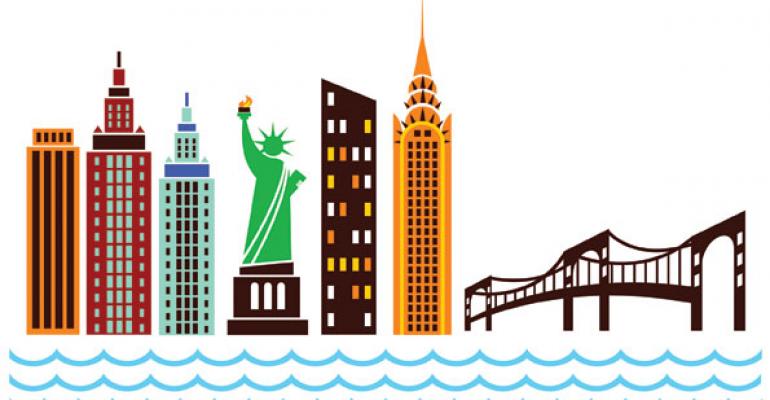 A Taste of the Apple: The New York City Market

From Aldi to Whole Foods, a variety of formats is vying for NYC sites

The food business is alive and well in New York City, as well it should be: There are more than 8 million mouths to feed every day in the five boroughs, not to mention 50 million annual visitors.

Not surprisingly, the competition for share of stomach is pretty intense, and given New York’s diverse economic and ethnic profiles, its density and its costs, a conventional supermarket isn’t always the ideal vehicle.

In ritzy Manhattan, those traditional operators are under attack from specialty stores, slick new drug stores that double as high-end convenience/food stores and Internet food delivery services. The working-class outer boroughs have long belonged to independents, including specialty ethnic grocers and small players skilled at making sense of tight spaces and dense neighborhoods, with some arriving now with the help of financing to serve so-called food deserts. 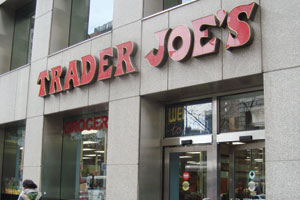 “Every little bit hurts a little,” admitted John Catsimatides, chief executive officer of Red Apple Group, parent of the Gristedes chain operating 32 stores in Manhattan and Brooklyn. “It isn’t one thing. It was FreshDirect. It was Trader Joe’s. It was Aldi. The 7-Elevens. What happened when the drug stores turned into food stores. The Costcos and the BJ’s. That is a lot. Not any one thing is a problem, but the combination of all those items is significant. It hurt.”

In the meantime, new names are knocking at New York’s door. Wal-Mart has stalked the city for years and has continued a public-relations campaign to smooth its arrival to New York, but has yet to make a deal for a location. Aldi last year made its arrival in New York with stores in Queens and the Bronx, bringing along a kind of pricing that the city had never seen before. ShopRite is looking to bolster its presence beyond the three locations it currently operates in the city and Stop & Shop is rebounding from a tentative arrival here with modern new stores in places like Queens and Staten Island.

“New York City is one of the few economically stable growth markets in the U.S., and there a lot of things happening,” Burt P. Flickinger III, managing director of Strategic Resource Group, New York, told SN. 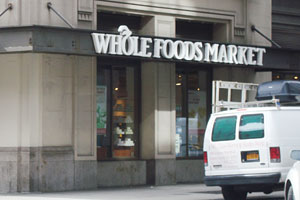 In Manhattan, the arrival of destination stores including Whole Foods Market and Trader Joe’s, rising rent and business costs, as well as a dramatic transformation of Duane Reade from a slapdash drug store to a well-appointed food/convenience and drug chain has made a significant impact on conventional neighborhood supermarkets like Gristedes and D’Agostino, which once stood as local market leaders, sources said.

Catsimatides in a recent interview with SN displayed a sense of New York attitude in a plan to fight back against drug stores adding food.

“We’re converting half our stores to drug store/pharmacies to compete with them,” promised Catsimatides, who briefly changed the banner outside one of his stores to “Trader John’s” in retaliation to a Trader Joe’s locating nearby. “If they’re going to sell a food item at a discount, we’ll take a pharmacy item and sell it for nothing. We’re not dependent on that gross margin for our living.” 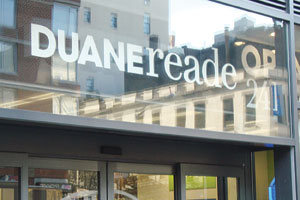 But Gristedes’ lower profile these days — it operates 32 stores today, down from more than 50 in the region five years ago — is in part because rising rents and additional food retailing competition made it better business to sell sites to fast-growing players like Duane Reade than to operate supermarkets there. While Duane Reade — today owned by Walgreen Co. — is approaching “site saturation” in Manhattan, rival CVS remains on the hunt for new stores with space to sell food here, Flickinger said.

“I think that trend of food retail changing to chain drug will continue, though it may be more modest,” he said.

D’Agostino operated 23 stores in the New York region in 2006, according to Metro Market Studies. It operates 14 stores today, 13 in Manhattan. Its officials weren’t available for comment. 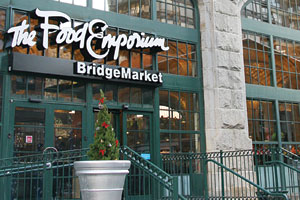 To some degree, the decline of those conventional stores — along with the rise of rivals for the upscale customer — is paving a path for The Food Emporium, A&P’s Manhattan-based banner, to claim a “neighborhood store” positioning. That chain this winter unveiled renovations at two Manhattan sites showcasing a brand based on knowledgeable sales staff and products relevant to their location, stepping away somewhat from the “gourmet store” image it courted in previous years.

“What this market is looking for is a convenient shopping experience where they can get the things they need every day as well as the nicer things too,” Danny Wodzenski, a district manager for A&P, told SN during a tour of a newly redesigned Food Emporium store on New York’s Upper East Side.

A new Upper East Side neighbor, Fairway Market, was putting some pressure on The Food Emporium as well. Founded as a produce market on the Upper West Side, Fairway has emerged as a kind of feisty urban Wegmans in recent years. An investment from private equity firm Sterling Investment Partners five years ago has more than doubled the size of the chain to nine stores, with its most recent openings on the Upper East Side in July and in Douglaston, Queens, in November. 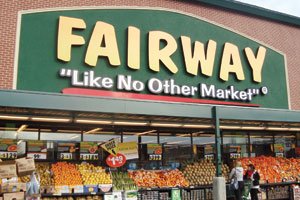 Fairway officials were not available for comment. But Flickinger described business as “phenomenal” at the company’s newest stores. “The only problem they’re having is that shoppers need to decide which hours to go to avoid the crowds there,” he said.

The new competition has also meant trouble for Pathmark, a pioneer in finding lucrative volume in low-income communities. According to Flickinger, some city Pathmarks were doing $1 million in weekly sales but have seen deterioration as its parent company A&P struggled into Chapter 11 bankruptcy.

Pathmark’s landmark Harlem location will get additional competition when Aldi makes its debut at the nearby East River Plaza — a center that already counts food sellers Costco and Target as tenants. The Harlem Aldi store — officials declined to provide an opening date — would be its third in city since debuting a location in Rego Park, Queens, a year ago. A Bronx location opened late last year. 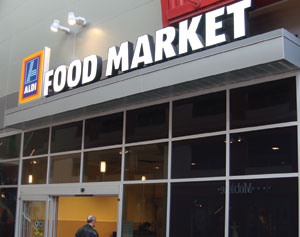 “We approached the NYC market similarly to our other new markets, with a special regard for higher customer traffic,” Bruce Persohn, vice president of the Aldi’s South Windsor, Conn., division, said in a written response to SN’s questions. “Our development in the boroughs has progressed according to plan. We continue to see new customers every day and have been very pleased with their feedback thus far. As our store count continues to increase throughout the city, New Yorkers will become even more familiar with the Aldi brand, discovering our high-value and high-quality products, just as all of our customers throughout the country have done.”

Aldi’s arrival introduces hard discounts to a city where high occupancy and labor costs make such a concept a rare find in the food space. Wal-Mart Stores, the Bentonville, Ark.-based discount giant, has been looking for an entrance to the city for years now but has encountered opposition from political and labor groups.

A campaign to soften its image and highlight its benefits, including a website and Twitter account, and a series of high-profile donations to city youth programs, has helped to turn public sentiment around to a point where Wal-Mart’s message is that shoppers support its arrival. A political climate favoring development of affordable food sources in the city (see related story) would also seem to be on Wal-Mart’s side today.

“While we don’t have any new projects to announce in the city, we know that New Yorkers want to shop and work at Walmart and as a result, continue to evaluate potential opportunities here,” Steven Restivo, a spokesman for Wal-Mart, told SN. “New Yorkers want quality jobs and affordable groceries and it remains our goal to be part of the solution.”

Published reports have said Wal-Mart was in negotiations with the developer of a shopping center in Brooklyn known as Gateway II. Its developer, Related Cos., did not return calls seeking comment on its status.

According to Flickinger, Wal-Mart’s long-fought-for arrival in Chicago has been drawing shoppers, but leaving many of them disappointed as a result of low staffing levels leading to poor service and out-of-stocks at those sites. “From what I’ve seen, Wal-Mart does not appear ready to do business in high-volume city stores compared to its competitors,” he said.

Activity in the Outer Boroughs 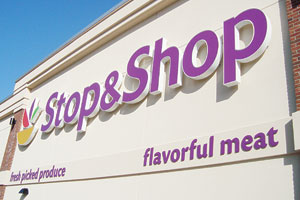 In the outer boroughs, some chains are moving in. Stop & Shop, which was a little-known name when it acquired and converted some Edwards stores more than a decade ago, has more recently returned to the city with a cleaner image. Today the Ahold-owned banner operates 14 stores in the boroughs and another in nearby Yonkers, N.Y., spokeswoman Arlene Putterman told SN. Its most recent additions are three former King Kullen sites on Staten Island. Those stores originally were Pathmark and/or Waldbaums locations that federal antitrust officials mandated be spun off when A&P and Pathmark merged.

Staten Island is beginning to resemble communities surrounding the city where the conventional grocers Stop & Shop, A&P and ShopRite are longtime rivals. ShopRite has the smallest presence of that trio in the city but indications are the Wakefern Food Corp. cooperative banner has an appetite for more. ShopRite has been mentioned as a likely supermarket tenant for a proposed high-profile shopping center at the Brooklyn Navy Yard site. Wakefern officials insist no deal is done and would say only that it remains interested in opportunities here. The ShopRite banner currently flies at one site in Brooklyn operated by Glass Gardens and at two Staten Island locations owned by Mannix Family Supermarkets.

Wakefern products including the ShopRite brand are also making their way into the city more than ever before. Catsimatides of Gristedes said his stores are buying nearly 70% of its goods from Wakefern today, up from 50% when their deal was struck two years ago. More recently the Brooklyn-based Bogopa Service Corp., parent of the Food Bazaar independent chain, reached out to Wakefern to bolster its supply of ethnic goods at its stores.

Founded and run by Francis An, who was born in Korea, raised in Argentina, and lived in Canada before coming to New York, Food Bazaar’s 16 locations — 13 in New York City — aspire to provide authentic foods favored by immigrant shoppers in particular neighborhoods they reside.  Bogopa is a Korean phrase meaning “yearning for you,” the company said. Its stores call themselves “Your Home Away from Home.”

“We feel we have a good understanding of the customer’s needs where we have stores,” Justin Shon, director of corporate affairs for Bogopa, told SN. “We go to great lengths to try to find the products that our customers really need, and make them feel like they’re getting food from home.”

Bogopa has been one of the most active companies taking advantage of incentives offered by the city’s FRESH (Food Retail Expansion to Support Health) program, which can grant tax relief and zoning assistance to food retailers locating in underserved communities. Food Bazaar has received approval for financial incentives at six properties, with projects including an expansion of its Bushwick, Brooklyn, store and the replacement of refrigeration equipment at a Bronx store.

“Business has been fair,” Shon said. “We struggle along with many of our customers. But we’re doing our best to keep up with the competition and we think we’re up to the task.”