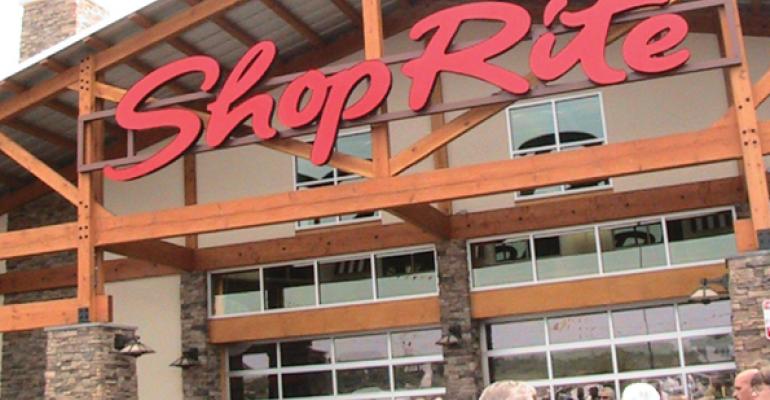 BRODHEADSVILLE, Pa. — How big is the new ShopRite here? At a preview event before the store’s Aug. 5 opening, Christopher Kinsley Sr., the store’s general manager and vice president, was still awaiting delivery of benches to provide shoppers places to sit down and rest as they make their way across the 95,000-square-foot store. On the positive side, the opening made room in Kinsley’s garage.

A 1926 Ford Model T was moved from Kinsley’s garage to the new store, where it takes its place among a variety of antiques and displays for which there were no longer space in the 53,000-square-foot unit that the new store replaced. The antiques signify the heritage of Kinsley’s Family Market, founded by Chris Kinsley’s grandfather Clayton Kinsley 62 years ago. Having plenty of space to display them testifies to the power of the ShopRite’s Wakefern Food Corp. cooperative and what it can mean to a single-store operator that knows its shoppers. 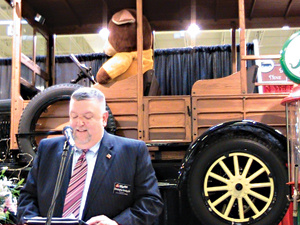 Kinsley Family Markets teamed with Wakefern 14 years ago and in time outgrew its former Brodheadsville location, located in a strip mall around the corner from its new site. The new store, which cost $26 million to build and took more than seven years to develop, is a kind of supersized local market combining the variety and services of a modern chain with the feel of a mom-and-pop grocer. Originally planned for around 70,000 square feet, plans grew several times in response to surveys indicating what shoppers would support, Kinsley said.

The building takes exterior design cues from the outdoor retailer Cabela’s, utilizing stone and thick wood beams. Inside the entryway, a sign declares WELCOME TO THE WORLD’S LARGEST SHOPRITE.

Inside, shoppers will find a vast array of fresh and prepared foods, specialty departments and new features, including a pick-up area for customers who use the ShopRite from Home Internet shopping service and a dedicated beer-to-go department. An upstairs lounge known as Doris’ Café is staffed by an executive chef and includes seating and tables overlooking the store as well as a modular couch around a fireplace and a flat-screen television. Doris is Christopher Kinsley’s mother; she and Robert Kinsley took over the business from Robert’s father Clayton in 1967. Their daughter, Dee Dee, still works for the company, as do Christopher’s two sons, Robert and Christopher Jr. 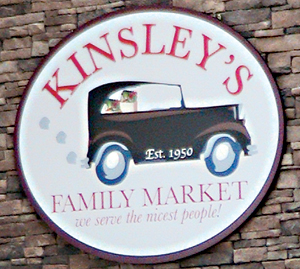 A variety of antiques including vintage food containers adorn the tops of shelves and share in a whimsical and sometimes kitschy presentation. A mounted cow’s head by the dairy department “moos” at the push of a button, and a chicken by the meat department clucks. A model train runs on tracks suspended above the checkout area, where lanes are designated by railroad crossing signals. The Model T sits atop a stage near the front of the store (Scrunchy, the ShopRite bear, sits in the driver’s seat). The car also serves as a design logo for Kinsley’s Family Market, which appears on aisle signs and at the store’s entrance along with the slogan “We serve the nicest people!”

Kinsley said he felt the design will help the store become more of a destination for area shoppers while continuing a tradition of hospitality that had long been a part of the company. The store it replaced resembled a barn, complete with red paint, and is where the model trains originated. “If people are waiting on line, we may as well give them something to look at,” Kinsley reasoned.

He confessed to few worries as the opening approached, expressing confidence that his employees — most department managers have more than 20 years of experience — could handle whatever challenges the new space presented. He’s also grateful to Wakefern for providing a brand capable of making a powerful price impression and for help in areas such as merchandising.

Wakefern in turn admires Kinsley’s for its service and local involvement.

“The level of customer service and community support that they continue to deliver to their neighbors — each of whom they seem to know by name — is well-known throughout the Wakefern cooperative,” Joe Sheridan, president and chief operating officer of Wakefern, told SN. “Their spirit of entrepreneurship continues to be an inspiration and I am proud to congratulate them on this beautiful new store.”

Located at the foot of the Pocono Mountains between the Delaware Water Gap and numerous ski resorts, Brodheadsville counts a number of second-home residents. Its supermarket profile changed in recent years after Weis Markets expanded and upgraded a former Mr. Z’s store there in 2010 while ShopRite was still developing its next site. Those rivals today can spy one another from their respective parking lots. Wal-Mart, Giant-Carlisle and Wegmans also compete in the area.

Dennis Curtin, a spokesman for Weis, said the Brodheadsville Weis “hasn’t missed a beat,” despite the reopening of ShopRite, saying Weis worked hard to reinforce its value proposition, based on weekly features and everyday shelf prices; locally relevant selections; and emphasizing store conditions and service.