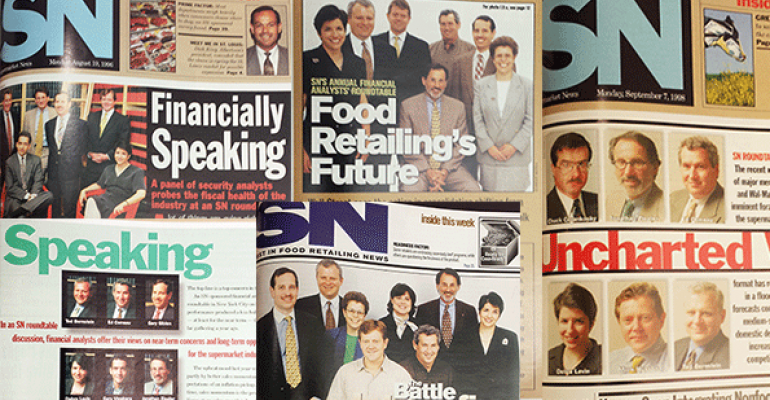 In honor of the 20th annual Financial Analysts Roundtable event, SN looks back at the first 19 discussions beginning with the first five, presented in a series&nbsp;leading up to SN&rsquo;s coverage of this year&rsquo;s event, which took place last month. A summary of 1996-2000&nbsp;revisits consolidation and its aftermath

In honor of the 20th annual event, SN looked back at the first 19 discussions, presented in the below capsule reviews. These will be published in a series leading up to SN’s coverage of this year’s event, which took place last month. 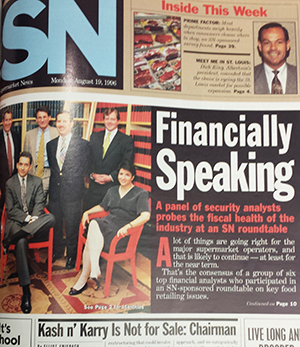 High levels of consumer confidence, healthy employment had analyst participants in the 1996 roundtable, optimistic for the industry.

Analysts viewed the growth of Walmart Supercenters as a positive for the industry because it would force retailers to operate more efficiently.

"The supermarket business has been moving away from a buying mentality and reliance on inflation and more toward running the business where you have a better understanding of your costs and you're making intelligent merchandise and procurement decisions to remove costs and improve efficiencies,” one participant said.

Another noted that retailers were focused on driving business through micromarketing and category management rather than price, "and consequently, they're seeing margin improvement. What scares me is things are so good, they can only go one way." 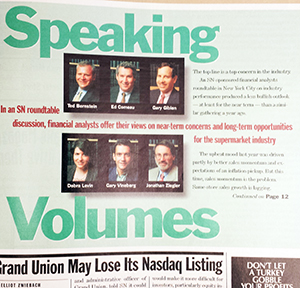 Sure enough, sales momentum lagged, and overcapacity was becoming a major issue, though supermarkets were still making margin gains through greater efficiencies. Alternative formats were also becoming a bigger threat.

"Clearly, volume growth is not happening, and other channels are taking business away from this one," said one analyst during the second annual roundtable.

Others noted that acquisitions looked like a viable way to grow top-line sales as organic growth became increasingly difficult: “Every company must face the issue of how long it wants to keep pushing margins and rationalizing zero and negative same-store sales growth while they are adding capacity.” 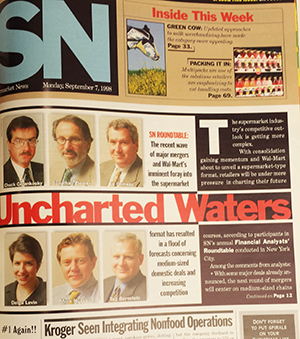 In the wake of two giant mergers—Albertsons’ acquisition of American Stores and Kroger’s Fred Meyer buy—analysts were enthusiastic about the prospect these deals would create synergies that would drive better financial results.

However, they were very concerned about the new Neighborhood Market format Wal-Mart Stores was about to unveil, fearing it would pose a serious competitive threat to most supermarket operators if it was rolled out as rapidly as the analysts expected it to be. 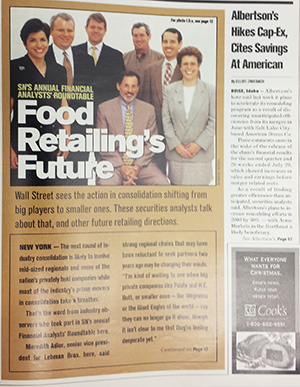 As the euphoria from the prior year's acquisitions was waning amid integration problems, investors were beginning to lose interest in supermarket stocks.

"Supermarkets and drug stores were probably the only games in town for a lot of U.S. investors [in 1998]," one analyst said during the roundtable in 1999.

"But that, coupled with the excitement over the acquisitions, led those stocks to a pretty high level, and they've basically been giving it all back since the end of the year."

Panelists also expressed concerns that the Internet might be a bigger competitive threat to supermarkets than alternative formats. 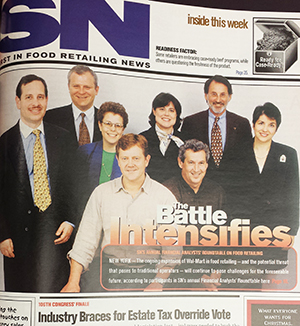 With only eight Neighborhood Markets in operation, analysts were still concerned about the impact those stores would have on supermarket valuations once Wal-Mart decided to roll them out aggressively.

Although consolidation was slowing, in part because of fears that federal antitrust regulators had been far too aggressive, "hard, cold economics" would eventually push a variety of strong regional chains to seek merger partners, one analyst predicted during this roundtable. The prospects for e-commerce were also up for debate, as “pure-play” retailers led by Webvan expanded rapidly to high customer satisfaction — but with questionable economic viability.