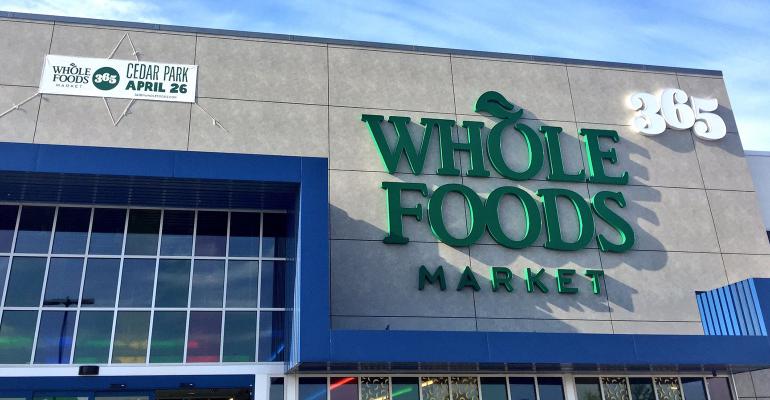 365 by Whole Foods
The new 365 store is opening in the Cedar Park neighborhood of Austin, Texas.
News>Retail & Financial

On Wednesday, Whole Foods Markets will further its endeavor to bring a more economical incarnation of its brand to the market.

365 by Whole Foods will roll out its fourth location Wednesday with a 30,000-square-foot facility that will serve as the first installment in Texas. The store is in the Cedar Park neighborhood of Austin.

The 365 branded stores bring Whole Foods’ patented organic, healthy approach and deliver it to customers via grab-and-go prepared options as well as standard grocery items. The selections are typically available at a more value-oriented price point than the flagship stores offer.

In November, CEO John Mackey admitted that the transition was not an immediate cure-all and that the venture’s future was unclear.

Mackey added that the company was “still incredibly bullish” on the concept and pointed out that the 365 venture was still evolving.

A reason for the optimism is the belief that the newest wave of 365 locations, beginning with the grand opening in Austin, will launch a more fine-tuned version of the concept.

Via release, the company echoed Mackey’s sentiments and labeled the upcoming 365 locations as a “new wave” of stores that will bring “greater ease to the grocery shopping experience through a blend of design, technology and experience.”

A key component of the Austin 365 store will be its two full-service eateries: Easy Tiger and JuiceLand.

"ELM Restaurant Group [which is opening the concepts] has always placed a strong emphasis on procuring high-quality, locally sourced seasonal products,” said Chef Drew Curan of Easy Tiger. The eatery doubles as both a bakery and a beer hall.

“Our exciting partnership with 365 by Whole Foods will give us a chance to feature not only Easy Tiger's food and hospitality to a new audience, but also to showcase many local farms, purveyors and products that are not typically represented on such a huge stage,” Curan said. “Joining forces with such a prestigious company as Whole Foods is a win-win for all involved, including the shoppers in Cedar Park and Austin.”

Jeff Turnas, president of the 365 division, touched on the versatility that the Whole Foods offshoot offers clientele.

“Whether you’re looking for a quick in-and-out shop for a few items, stocking up on groceries for the week, grabbing a smoothie from JuiceLand or meeting for a drink at Easy Tiger, you’ll find a blend of innovation and convenience in our store,” Tumas said. “From the food offerings to the design, we’ve built a foundation on the quality standards you’ve come to expect from Whole Foods Market in a fun new format that’s easy to navigate and is focused on value in every department.”

The opening is scheduled for 9 a.m. local time Wednesday.