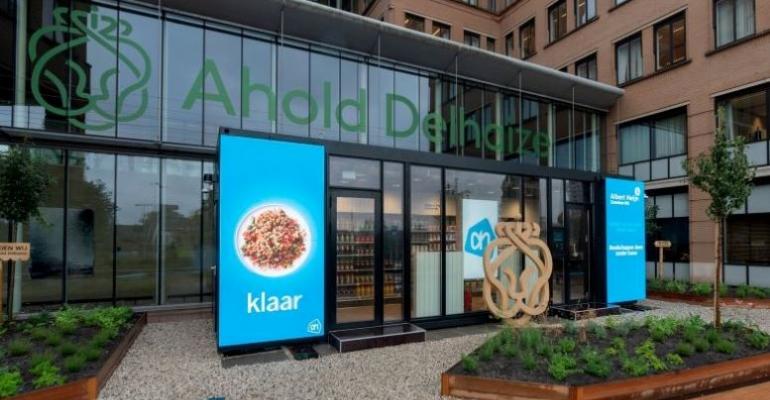 AH To Go is located at in front of the support office at Ahold Delhaize’s corporate headquarters in Zaandam. Plans call for the freestanding store to be piloted by employees over the next two months and then be relocated to another Netherlands site later this year.

When asked if the concept is slated to be tested in the United States, an Ahold Delhaize spokeswoman said the company can’t disclose future plans at this time. The retailer’s Ahold Delhaize USA arm, its largest business unit, operates the Stop & Shop, Giant Food, Giant/Martin’s, Food Lion and Hannaford supermarket banners.

“Technological innovations follow each other at breakneck speed and offer endless opportunities. Convenience for our customers comes first,” Albert Heijn Brand President and CEO Marit van Egmond said in a statement. “This latest concept not only makes shopping very easy due to its autonomous nature, [but also] this “plug and play” store can be placed at locations where there is a temporary need for a small store, from offices or university campuses to residential areas under construction that do not yet have shopping facilities. A second advantage is that the store can always be open, which is useful for people who are on the road very early or very late.”

AiFi’s store automation system combines artificial intelligence (AI), edge computing and scalable sensor fusion technology to provide the checkout-free operation and retail experience, the companies said. The AiFi software identifies the products that shoppers are taking off the shelves and uses cameras and shelf-weight sensors to determine their purchases. Items removed from the shelf and then put back aren’t charged. No personal data is retained, and all servers are located on-site.

The digital, self-contained AH To Go store works as follows: Customers use a debit or credit card to open the door, enter, take the products they want, walk to the exit — where their purchase is displayed and payment processed automatically — and then leave.

“We developed NanoStore with advanced computer vision and sensing technologies to enable automated checkout,” according to Steve Gu, CEO and co-founder of AiFi, which unveiled NanoStore in January at the National Retail Federation’s Big Show in Manhattan. “Cameras see where you are in the store and associate product items to your virtual basket. In addition, in-store sensors keep track of products that are taken off or put back on the shelves. Multiple sensing modalities work like a symphony to accurately decipher who is grabbing what, instantaneously. As a result, customers can enjoy ultra-convenient and delightful shopping with lightning speed.” 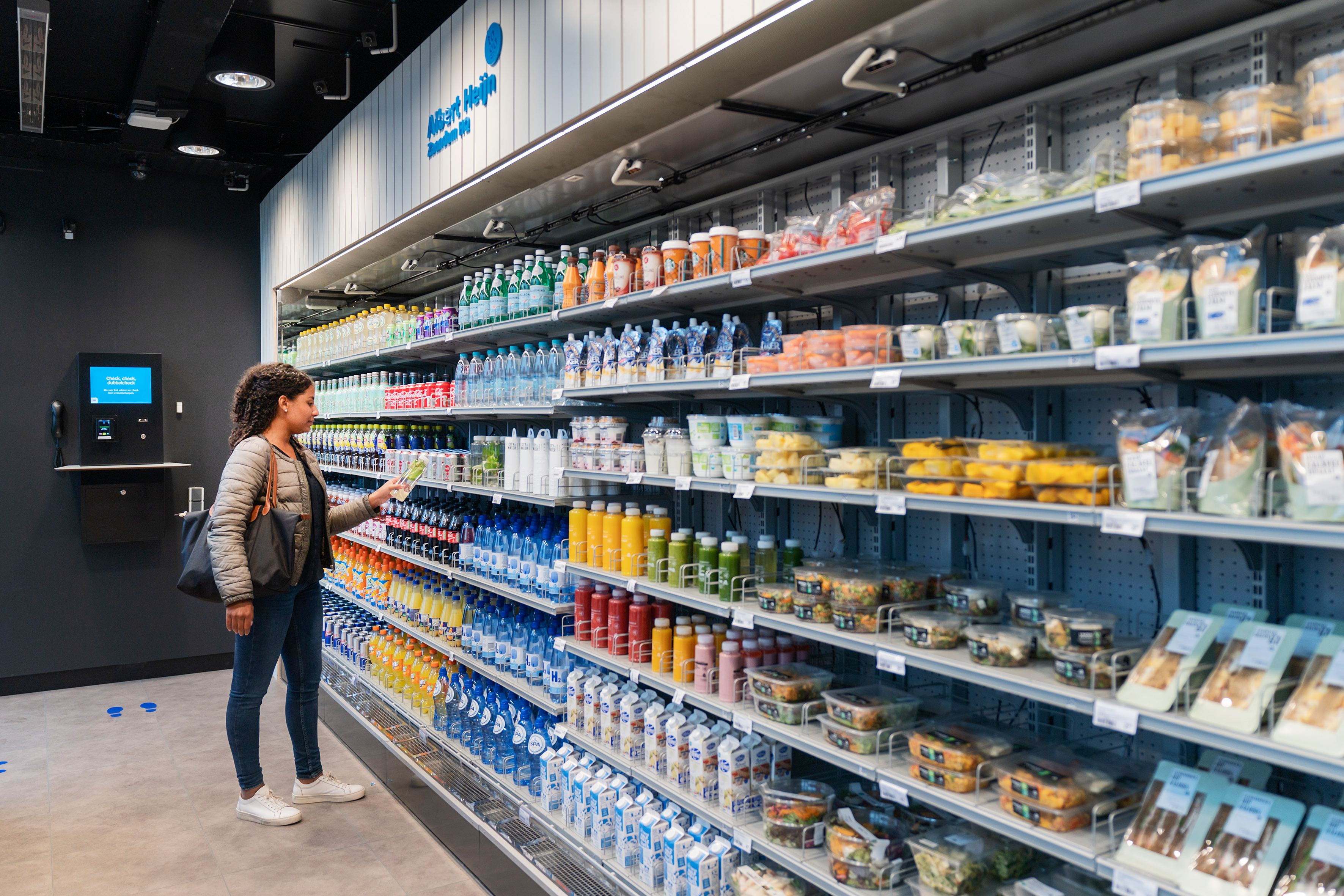 Products sold at AH To Go include ready-to-eat foods like sandwiches, wraps, salads and side dishes; pre-cut fruit; yogurt and milk; bottled water, juice and soft drinks; and a range of other convenience-focused meal, snack and beverage options, with a focus on healthy fare.

Ahold Delhaize, AiFi and ING said the retail experience is designed to feel like shopping out of your own refrigerator or pantry, with no waiting and no scanning.

“It works simply: When the customer shows a payment card at the entrance, the door opens and the store starts to register the purchase of products that the customer takes from the shelves. When the shopping is done, the customer stands at the exit and sees the total amount on a display,” explained Roel Popping, director of payments at ING Netherlands, which developed AH To Go’s payment solution and handles payment processing. “The customer does not have to do anything else. He or she will be notified that the payment has been successful and can leave the store. The customer does not have to register in advance or download an app, which makes the payment system innovative and very accessible.”

While a number of tech firms have developed cashierless store platforms, and various food retailers are experimenting with the technology, the rollout of Amazon Go stores is stirring consumer interest in the concept and demonstrating expansion possibilities.

So far, Amazon has opened 16 Go stores in Seattle (five), San Francisco (four), Chicago (four) and New York City (three), with another two upcoming for Chicago. The outlet’s use Amazon’s “just walk out” technology and are primarily located in high-traffic sites such as transit hubs, office buildings, pedestrian plazas and shopping venues. Aside from a 450-square-foot, employee-only location inside Seattle’s Macy’s building, Amazon Go stores now open range from just under 1,200 square feet to 2,400 square feet. The planned Merch Mart and the Prudential Plaza stores in Chicago will be 930 square feet and 1,425 square feet, respectively.

Industry observers note that Amazon Go could become a major business for Amazon as it expands its physical retail footprint. Based on a Bloomberg report last September saying that Amazon may open up to 3,000 Go stores by 2021, RBC Capital Markets estimated that Amazon Go could grow into a $4.5 billion business within a few years. Published reports also have said Amazon Go may occupy new types of locations such as airports and expand to thousands of similar sites over the next several years.