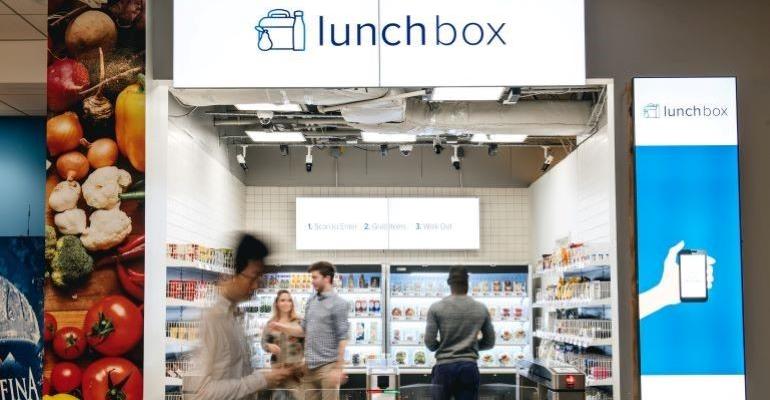 Retail Business Services (RBS), Ahold Delhaize USA’s services arm, said Thursday it’s now testing lunchbox at its office in Quincy, Mass. For the project, RBS has partnered with digital solution provider UST Global to develop the store, which will enable customers to make cashierless purchases by scanning in as they enter, selecting items and then walking out.

RBS noted that lunchbox can be set up in as soon as six weeks at a “lean cost,” making it more efficient than other frictionless checkout store concepts. The application technology was created in RBS’ innovation lab and tech hub.

“Lunchbox is an easy, fresh shopping alternative,” said Paul Scorza, executive vice president for IT and CIO at Retail Business Services. “Once registered, shoppers simply scan in, shop and walk out. It’s that easy. And it offers fresh, healthy options 24/7. You can grab a snack, a salad, fresh fruit or even a carton of milk on your way home.”

An RBS proprietary app admits shoppers into the lunchbox store and charges shoppers for purchases. To give customers more payment options, the app’s wallet integrates services such as PayPal, Venmo, Apply Pay and Google Pay.

Products removed from the store’s shelves are detected by artificial intelligence (AI) running on Intel Core i5 and i7 processor-based systems optimized with the Intel Distribution of OpenVINO toolkit. Likewise, anonymous body skeletal tracking connects the products taken to the shopper who removed them from the shelf.

According to RBS, lunchbox was able to use existing Intel-based point-of-sale systems and deploy on-premise AI at maximum performance by leveraging the Intel Distribution of OpenVINO toolkit.

“We believed in this concept so much we brought it to our own office,” Scorza explained. “Our cafeteria that serves more than 1,000 associates was being remodeled, and we were looking for a quick, cost-effective solution to give associates access to beverages, snacks and fresh items at a variety of hours. We implemented this solution in just six weeks. Today, thousands of shops, with groups of up to 12 in the store at the same time, have been successfully completed.” 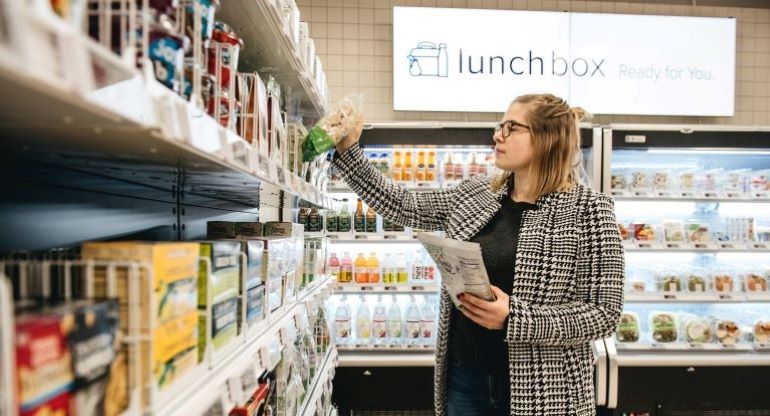 Lunchbox will enable customers to make cashierless purchases by scanning in as they enter, selecting items and then walking out.

For the lunchbox initiative, RBS said it led application development, technology connectivity and provided food retail operations expertise, while UST Global and its tech partners provided the AI and machine learning (ML) solution and physical infrastructure for the store.

No specific timetable has been set for the lunchbox pilot, but plans call for a lunchbox store to be tested at another RBS office in 2020, an RBS spokeswoman said. Talks about a future rollout of the concept are ongoing, she added. The technology is slated to be demonstrated in January at the National Retail Federation (NRF) Big Show in New York, in collaboration with UST Global and Intel.

“In the age of e-commerce, there are many opportunities for companies to evolve and better serve shoppers,” stated Mahesh Athalye, senior director of India-based UST Global, which has its U.S. office in Aliso Viejo, Calif. “Combined with AI/ML technology and purpose-built smartphone applications, solutions like lunchbox, will help deliver frictionless experiences for shoppers seeking a quick, touchless experience.”

AH To Go is located in front of the support office at Ahold Delhaize’s corporate headquarters in Zaandam. When asked if the concept is slated to be tested in the United States, an Ahold Delhaize spokeswoman said at the time that the company couldn’t disclose future plans. The retailer’s Ahold Delhaize USA subsidiary, its largest business unit, operates the Stop & Shop, Giant Food, Giant/Martin’s, Food Lion and Hannaford supermarket chains, as well as the online grocer Peapod.

Last month, Ahold Delhaize USA’s RBS said it plans to expand SCAN IT! Mobile frictionless checkout to about 30 stores by the end of this year. The proprietary solution, which customers use by downloading their supermarket banner’s SCAN IT! Android or iOS app, is currently offered at select Stop & Shop stores and Giant Food Stores’ Giant Heirloom Market locations.

With SCAN IT! Mobile, customers scan product barcodes with their smartphone as they shop and put the items in their cart or bag. The app keeps a running tally of the groceries scanned. When done shopping, customers exit the store via a designated checkout lane, see a “payment approved” message appear while walking through and are charged for purchases.