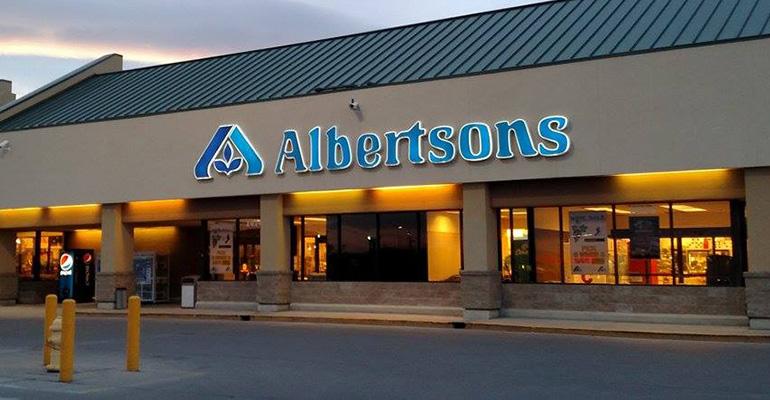 Albertsons Cos. saw sales edge up for its 2017 fourth quarter and fiscal year as the supermarket retailer looks ahead to its planned merger with drug chain Rite Aid Corp.

For the quarter ended Feb. 24, overall sales rose 1.6% to $14.03 billion from $13.82 billion a year earlier, Albertsons reported in a filing with the Securities and Exchange Commission (SEC). The company said revenue was lifted mainly by higher fuel sales and an 0.6% uptick (excluding fuel) in identical-store sales, which stemmed from improved customer traffic and growth in the average shopping basket.

Net earnings totaled $388.3 million versus $34.6 million in the 2016 quarter. Albertsons noted that the 2017 quarter includes an income tax benefit of $373 million from the recently enacted federal Tax Cuts & Job Act.

Operating income came in at $213.3 million in the fourth quarter, compared with $186 million in the prior-year period. That gain helped boost adjusted EBITDA (earnings before interest, taxes, depreciation and amortization) to $712 million, or 5.1% of sales, from $686.5 million, or 5% of sales, a year ago. Albertsons said the result marked its strongest fourth quarter since the Safeway acquisition in 2015.

"We are very encouraged by the trends in our business as we returned to positive identical-store sales and saw operating income and adjusted EBITDA improvements during the fourth quarter," chairman and chief executive officer Bob Miller said in a statement. "We expect to continue the positive momentum into fiscal 2018 with identical-store sales growth, as we continue to build and expand our digital offerings to enhance loyalty in store and online, including the recent announcement of a new digital marketplace, which is being launched to expand selection for our customers later this year.”

Fiscal 2017 highlights included a 60-basis-point increase in own-brand penetration to 23%, the expansion of Instacart same-day delivery to more than 1,300 stores and the rollout of Drive-Up & Go pickup available to over 100 stores, Albertsons said in the filing. Plans call for Instacart same-day delivery to reach 2,000 stores and Drive-Up & Go pickup to become available in 500 stores during fiscal 2018.

“We believe that these efforts, together with incremental synergies from the Safeway acquisition and the additional cost-reduction initiatives we outlined last quarter, will result in adjusted EBITDA of approximately $2.7 billion in fiscal 2018,” Miller added.

For the full 2017 fiscal year, Albertsons posted revenue of $59.92 billion, up 0.4% from $59.68 billion in 2016. The company attributed the slight gain primarily to new stores and acquisitions and higher fuel sales, partially offset by a 1.3% dip in identical-store sales.

Capital spending in fiscal 2017 came in at nearly $1.55 billion. Albertsons said it opened 20 new stores, including five acquired stores, and completed 166 remodels during the year.

Looking ahead to fiscal 2018, Albertsons projects identical-store sales growth of 1.5% to 2%, operating income improvement of $280 to $320 million and adjusted EBITDA of $2.7 billion. Capital expenditures are pegged at $1.2 billion.

"We are also looking forward to our merger with Rite Aid, which will create a leader in food, health and wellness, with excellent presence on the West Coast and a strong position in the Northeast," Miller said in the SEC filing. "We will be uniquely positioned to serve our customers' needs. We expect to realize significant synergies, both increasing revenues and reducing our costs, that in turn should improve shareholder returns and enable us to reduce debt and enhance financial flexibility."

In reporting their fiscal 2018 results on Thursday, Rite Aid executives underscored the opportunities offered by the proposed merger with Albertsons, which would become a public company under the $24 billion deal, announced in February.

“The merger will provide us new levers for growth, like the opportunity to leverage Albertsons expertise in food and consumables, and their manufacturing capabilities to further transform the front end of our stores,” Rite Aid chairman and CEO John Standley told analysts in a conference call. Standley is slated to become CEO of the merged company, with Miller serving as chairman.

“We can use own brand expertise of both companies to create a best-in-class portfolio that increases sales and improves margins. We can use our existing loyalty programs to leverage enhanced analytics that create stronger relationships with our customers,” Standley explained. “We can also create a world-class omnichannel platform that meets customers when, where and how they want to shop through our various store formats, food and prescription delivery options, and online and mobile capabilities.”

In late March, Rite Aid and Albertsons announced the expiration of the Hart-Scott-Rodino waiting period for the merger agreement. The companies expect the transaction to close early in the second half of calendar 2018, pending Rite Aid shareholder and regulatory approvals.

“We are also pleased to see the results that Albertsons released yesterday, which showed strong growth in comparable sales and adjusted EBITDA for the fourth quarter,” Standley added. “As we look to make the most of this opportunity to form a powerful combination with Albertsons, we also have a lot of exciting developments under way to strengthen our business at Rite Aid.”

The merged company would operate about 4,900 stores — including more than 4,300 pharmacies and over 300 retail health clinics — that serve 40 million-plus customers weekly and generate pro forma combined sales of $83 billion.