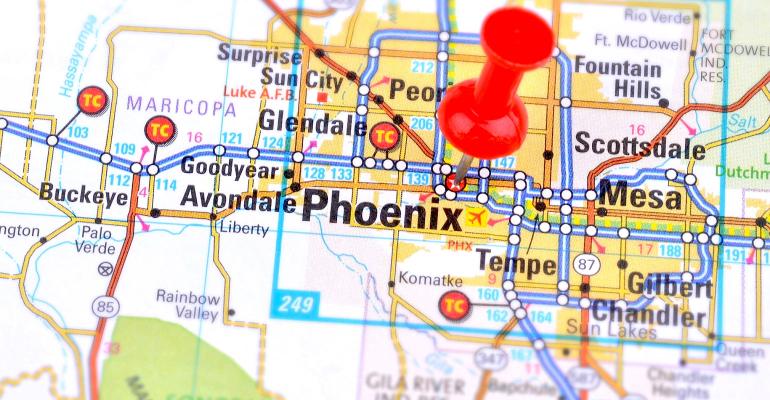 Local officials: Stores could open by 2020

Officials in Goodyear, Ariz., are moving forward on a job creation plan that would pave the way for Aldi to build a regional headquarters and distribution center that would take the hard discounter to the Grand Canyon State for the first time.

The city’s Economic Development office in June approved the city manager to authorize the agreement. A report Tuesday in the Arizona Republic newspaper said Aldi, with U.S. headquarters in Batavia, Ill., is in the process of buying city-owned and private land for a regional distribution center in Goodyear, a suburb of Phoenix.

An Aldi spokeswoman told SN late Wednesday it was scouting sites in Arizona and other markets but declined to provide more immediate specifics. The company in June said it anticipated opening another 900 stores across the country by 2022.

"ALDI has nearly 1,700 stores in 35 states and is one of the fastest growing retailers in the U.S. The company is charting an aggressive course to reach 2,500 stores by 2022 and is currently exploring opportunities in Arizona as well as multiple other markets from coast to coast," Liz Ruggles, the spokeswoman, said. "At this time we don’t have specific information about expansion areas or potential store locations but we look forward to sharing news as plans are solidified."

Officials in Goodyear told the paper they expected the site would create 132 jobs in the coming six years, and were anticipating operations there would begin in 2020.

Those moves would introduce Aldi to Arizona for the first time. The company currently operates nearly 1,700 stores in 35 states from the East Coast to Texas, as well as a group of stores in Southern California that opened for the first time in 2016. In California, Aldi’s first stores opened roughly three years after reports surfaced it was seeking to establish headquarters there.

The Phoenix market is relatively light on discount penetration, according to Metro Market Studies’ 2017 guide, which tracks industry market shares. According to Metro Market, Kroger’s Fry’s chain has the largest share in the market at 26%, followed by Wal-Mart Stores (19.9%) and Albertsons Cos.’ Safeway chain (10.2%). No. 4 grocer Bashas’ operates 31 Food City discount stores in the market and warehouse-style chain WinCo Foods has seven locations there.

The Republic report said Goodyear was offering incentives for Aldi proceed including waiving up to $285,000 in permit fees. Those incentives require federal approval.

This story was updated late Wednesday to reflect comment from Aldi.