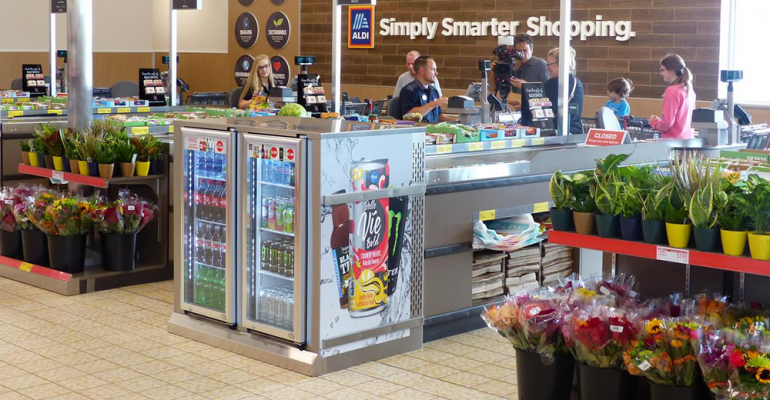 In support of its aggressive retail expansion, Aldi has kicked off a series of hiring events to be hosted this month at stores in eight states.

By the end of 2022, Aldi aims to add 25,000 new jobs across its business, including positions in its stores and warehouses as well as at the corporate level. The company is 18 months into a $5.3 billion, five-year expansion program that will upgrade most of its locations, grow its store base by nearly 50% and boost customers served per month from 45 million to 100 million.

Aldi said it aims to fill store associate, shift manager and manager trainee positions at the September hiring events. Stores in Ohio and West Virginia began holding the events on Wednesday, and locations in Virginia, Maryland, Illinois (including Chicagoland) and Indiana are scheduled to do so in the middle of next week, followed by stores in Georgia and Michigan at the start of the week thereafter.

Now with about 1,800 stores in 35 states, Aldi is looking to expand its employee base from more than 28,000 currently to over 50,000 by 2022. The company noted that it has been named to the Forbes America’s Best Large Employers list for three straight years.

“While many retailers are closing locations and facing a challenging retail climate, Aldi is expanding in every core area of our business, particularly our stores and warehouses,” Aldi U.S. CEO Jason Hart said in a statement. “We invite job seekers to be part of the largest expansion the company has seen as we advance our mission to help more than 100 million people save money on high-quality food every month by 2022.”

Aldi opened 135 new stores last year and expects to open 150 new locations this year. In June 2017, the company unveiled a $3.4 billion expansion plan that by the close of 2022 will boost its retail base to 2,500 stores. Several months earlier, the chain launched a $1.9 billion program to remodel and expand more than 1,300 stores by 2020. The remodels bring a new look and feel to the stores—plus more refrigerated space for fresh foods, including enhanced produce, dairy, meat and bakery sections.

And in tandem with those initiatives, Aldi early last month announced a major product expansion in which 20% of items in every store will be new versus a year ago.