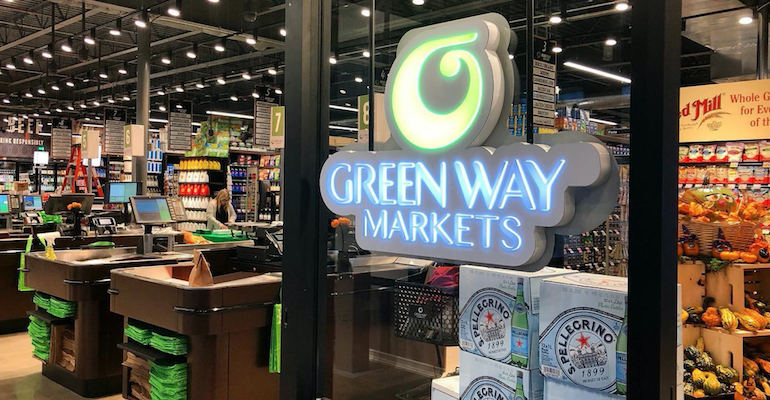 Located at 159 Maplewood Ave in Maplewood, N.J., the new Green Way store made its debut on Oct. 23 in a grand opening event. The supermarket stands on the site of a former Kings Food Markets store, which vacated the space in December. Kings and its sister chain Balducci’s Food Lover’s Markets were acquired in the fall of 2020 by Albertsons Cos.’ Acme Markets.

Green Way stores are designed to provide an enhanced grocery shopping experience, including a curated selection of prepared foods, produce, deli and fresh meat, according to Iselin, N.J.-based Allegiance. The “earth friendly” Green Way store-brand products also are aimed at offering “good food for you” options at an affordable price.

“It is exciting for us to celebrate the opening of our fourth Green Way Market and expand our customer base,” John Derderian, president and chief operating officer of Allegiance Retail Services, said at the grand opening of the new Maplewood store. “We would like to congratulate all Green Way Market members for their new and ongoing commitment to the communities they serve.”

Green Way Market made its debut in October 2019 with the opening of a store in Cross River, N.Y., owned and operated by the Estevez family. That was followed by openings of Green Way stores in Ridgewood and West New York, N.J. The Ridgewood store, also run by Estevez Markets, replaced a Kings location.

“The Maplewood community could not have been more welcoming, and we are thrilled to be here,” commented Adam Shapiro, co-owner/operator of the new Green Way Market with his wife Erica. “An exceptional shopping experience to help you ‘Eat Well, Live Well’ is our promise to our customers. Natural foods, specialty meats and cheeses, grab-and-go meals, plus variety and value. There is something for everyone.”

Jeremy Graham, grocery manager for Green Way, cited the “great management and staff” in noting  that the new supermarket quickly went from empty to fully stocked. Added Antwaun Carroll, a produce stocker who worked for the previous owner, “It has been a great transition. The layout is a lot better. It is roomier, and the presentation is wonderful. We are excited to be here.”