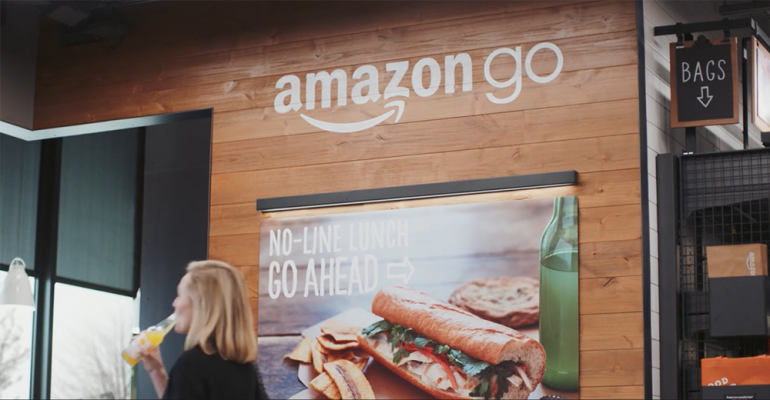 Moving ahead with its brick-and-mortar expansion, Amazon.com Inc. this week opened a new Amazon Go cashierless store in San Francisco, its 11th overall.

Located at 575 Market St., the 1,750-square-foot store marks the third Amazon Go in the city. Customers can choose from an array of ready-to-eat breakfast, lunch, dinner and snack options made by the store’s kitchen or brought in from favorite local kitchens and bakeries.

The Market Street store also carries a selection of groceries, ranging from staples like bread and milk to artisan cheeses and locally made chocolates. For customers who want to prepare food themselves, the location offers chef-designed Amazon Meal Kits as another mealtime option. Amazon said the kits include all the ingredients needed to make a meal for two in about 30 minutes.

Along with the three San Francisco locations, there are currently four Amazon Go stores in Seattle and four in Chicago. The outlets range in size from 1,200 square feet to 2,400 square feet, though one location — in the Macy’s building in Seattle — is an employee-only store that occupies 450 square feet. Amazon also has confirmed that it plans to open an Amazon Go store in New York City but hasn’t yet provided details.

While not a direct competitor to supermarkets, the Amazon Go format is seen as a threat to brick-and-mortar food retailers. Published reports have said Amazon Go may pop up in new types of locations such as airports and expand to thousands of outlets over the next several years.

An RBC Capital Markets analysis released in January estimated average annual sales of $1.5 million each for the then nine Amazon Go stores. Based on a Bloomberg report last September saying that Amazon may open up to 3,000 Amazon Go stores by 2021, RBC’s estimate would translate into a $4.5 billion business for the Go banner within a few years.

In a letter to shareholders last week, Amazon founder and CEO Jeff Bezos noted that the company can leverage its technology prowess to help grow its brick-and-mortar retail presence. 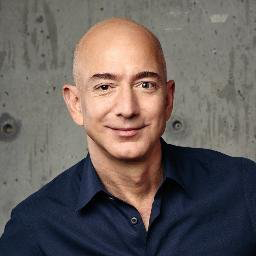 “Amazon today remains a small player in global retail. We represent a low-single-digit percentage of the retail market, and there are much larger retailers in every country where we operate. And that’s largely because nearly 90% of retail remains offline in brick-and-mortar stores,” Bezos (left) wrote in the letter. “For many years, we considered how we might serve customers in physical stores but felt we needed first to invent something that would really delight customers in that environment. With Amazon Go, we had a clear vision: Get rid of the worst thing about physical retail — checkout lines. No one likes to wait in line. Instead, we imagined a store where you could walk in, pick up what you wanted and leave.”

Amazon Go’s checkout-free shopping experience is powered by Amazon’s “Just Walk Out” technology. Overhead cameras, weight sensors and deep learning technology detect merchandise that shoppers take from or return to shelves and keep track of the items selected in a virtual cart. Shoppers use the Amazon Go mobile app to gain entry to the store through a turnstile. When customers leave the store, the Just Walk Out technology automatically debits their Amazon account for the items they take and then sends a receipt to the app.

“Getting there was hard, technically hard. It required the efforts of hundreds of smart, dedicated computer scientists and engineers around the world,” Bezos told shareholders. “We had to design and build our own proprietary cameras and shelves and invent new computer-vision algorithms, including the ability to stitch together imagery from hundreds of cooperating cameras. And we had to do it in a way where the technology worked so well that it simply receded into the background, invisible. The reward has been the response from customers, who’ve described the experience of shopping at Amazon Go as ‘magical’.” He added that he’s “excited about the future” for Amazon Go.

The future for Seattle-based Amazon also might include grocery stores. Citing unnamed sources, The Wall Street Journal reported last month that Amazon plans to open a grocery store in Los Angeles as soon as this year and has inked leases to open two other locations in early 2020. According to the Journal’s report, Amazon also is in talks to open grocery stores at shopping centers in San Francisco, Seattle, Chicago, Philadelphia and the District of Columbia and is mulling potential acquisitions of small retail grocery chains.

Amazon declined to comment on the report. The Journal said this grocery business would be separate from Amazon subsidiary Whole Foods Market, which earlier this month opened its 500th store in Atlanta.

E-commerce specialist Edge by Ascential also has predicted a major grocery expansion by Amazon. In January, a report by Edge said that Amazon’s grocery sales surged 45% in 2018, and 2019 could be the start of when “grocery finally hits” for the e-tailing giant.