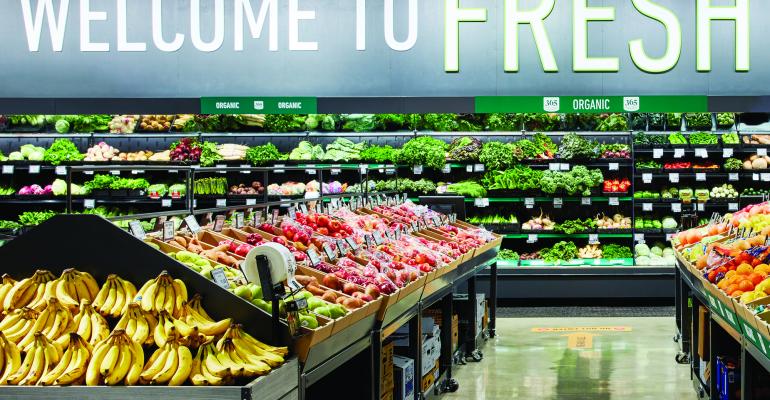 Three new locations to open in the coming weeks, all featuring Just Walk Out technology

The new stores bring the total of Amazon Fresh stores in Southern California to 14, and a total of 30 stores overall in Washington, Virginia, Maryland, Pennsylvania and Washington, D.C.

According to Jeff Helbling, vice president of Amazon Fresh Stores, new Amazon Fresh locations are planned for California, Illinois, Pennsylvania, Virginia, Washington state and New Jersey, though he didn’t specify the number of units or an opening timetable. Amazon, too, has begun hiring for an upcoming Amazon Fresh in Oceanside, N.Y., which would be the banner’s first location in the Empire State.

“We’re thrilled about the customer response to Amazon Fresh stores. Our efforts to evolve our grocery experience into a seamless, omnichannel offering have been well-received by shoppers and the industry,” Helbling told Supermarket News in a recent email interview. “Earlier this year, Amazon Fresh was named the fifth-best U.S. grocer on dunnhumby’s Retailer Preference Index — a solid ranking for our first time on the list. And a contributor to Forbes included the opening of our first Amazon Fresh store with Just Walk Out technology as ‘headline of the year’ in his 2021 Retail Award list. We have exciting plans for Amazon Fresh stores this year and in the future.”

The new California locations, which all measure approximately 35,000 square feet, will feature Amazon’s Just Walk Out shopping, which allows customers the option to skip the checkout line. Customers who opt for Just Walk Out Shopping can enter the store by scanning the In-Store QR code in their Amazon app, using Amazon One, or inserting a credit or debit card to open the Just Walk Out gates. Once inside the store, customers can shop like normal. Anything they take off the shelf is automatically added to their virtual cart, and anything they put back on the shelf comes out of their virtual cart. At the end of their trip, customers shopping with the Just Walk Out experience simply scan or insert their entry method again to exit and they’re good to go.

Amazon Fresh has a wide assortment of national brands and high-quality produce, meat and seafood, as well as a range of prepared foods made fresh in-store every day — from fresh-baked bread and made-to-order pizzas, to rotisserie chickens and hot sandwiches. Stores offer 365 by Whole Foods Market organics; local brands like Pizza Port Brewing, CoolHaus Ice Cream and Rockenwagner Bakery; regional favorites like Duke’s Mayo and Ellenos Yogurt; and new Amazon exclusive brands like Aplenty and Cursive.

To celebrate the new stores, including Mission Viejo’s grand opening on Thursday, Amazon Fresh will host festivities throughout opening weekends including gift card giveaways, free samples and special discounts on items in all departments.