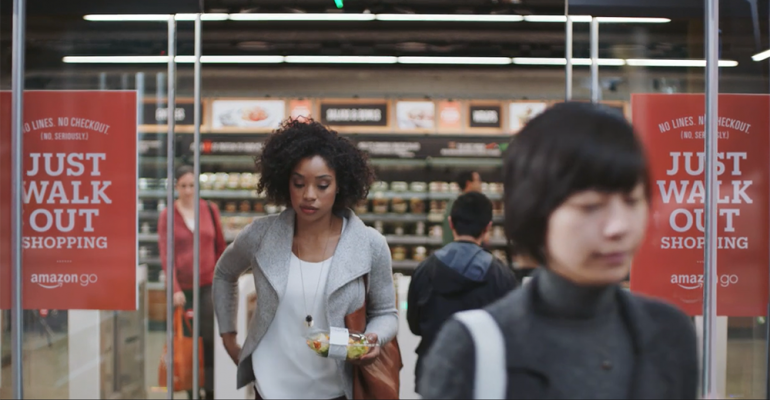 But not all Americans would embrace cashier-free retail concept, survey says

Though Amazon.com Inc. is just getting under way with its Amazon Go stores, a new study finds that U.S. grocery shoppers are open to the cashierless retail concept.

Nearly 75% of 1,000 U.S. consumers polled by marketing firm Digital Third Coast for Schorr Packaging Corp. said they would be “extremely likely” or “very likely” to shop at an Amazon Go store if one opened nearby. What’s more, 84% of respondents indicated they would enjoy the Amazon Go customer experience more than conventional grocery shopping.

The checkout-free technology of the Amazon Go stores carries a lot of weight with consumers, the survey revealed. More than 25% of those polled said they would pay more for their groceries if they didn’t have to wait in line at the register. Meanwhile, brands carry less weight: 32% of respondents said they would have less brand-specific preferences in an Amazon Go store.

“Amazon recently announced a futuristic take on the traditional grocery store, dubbed Amazon Go. It’s unknown how this will impact the brick-and-mortar retail industry, which is why we surveyed 1,000 Americans for their take on how Amazon Go will impact their lives, shopping habits and purchase decisions,” Aurora, Ill.-based Schorr Packaging stated in the study.

In January, Amazon opened the first Amazon Go store in Seattle. The e-tail giant confirmed that two more of the convenience-focused stores are planned for Chicago and San Francisco but hasn’t disclosed a timetable or details about the openings.

The 1,800-square-foot Amazon Go in Seattle carries primarily food and beverages, although nonfood items like batteries and over-the-counter medicine also are available. Food offerings include ready-to-eat breakfast, lunch, dinner and snack options made by the company’s chefs and local kitchens and bakeries.

The grocery mix ranges from essentials such as bread and milk to artisan cheeses and locally made chocolates. Also offered are chef-designed Amazon Meal Kits, which the company said enable consumers to make a meal for two in about 30 minutes.

Amazon’s “Just Walk Out” technology drives the Amazon Go store’s cashierless shopping experience. Overhead cameras, weight sensors and deep learning technology detect merchandise that shoppers take from or return to shelves and keep track of the items selected in a virtual cart. Shoppers use the Amazon Go mobile app to gain entry to the store through a turnstile. When customers leave the store, the Just Walk Out technology automatically debits their Amazon account for the items they take and then sends a receipt to the app.

The Schorr/Digital Third Coast survey found that this tech-heavy shopping experience doesn’t appeal to everyone, particularly older consumers. More than 30% of the Baby Boomers polled said they would be “somewhat likely” or “not likely” to shop at an Amazon Go store if one opened nearby. Also, 20% of respondents reported that they feel like they would be “losing out on something” by shopping at an Amazon Go store versus a traditional supermarket.

When consumers were asked to name the biggest drawback of shopping at Amazon Go compared with a conventional grocery store, 34% cited the lack of ability to use coupons. The next most-cited drawbacks were lack of product selection (29%), lack of social interaction (24%) and not being able to pay with cash (12.5%).

“Not everyone is on board — specifically, Boomers. They remain skeptical,” Schorr said. “While 75% of people surveyed said they would likely shop at an Amazon Go if one were located nearby, 30% of Baby Boomers said the opposite, that they would be unlikely to shop at Amazon Go even if it were conveniently located.”

The findings about Amazon Go reflected general preferences about grocery shopping uncovered in the study. Asked to rank the top factors influencing where they shop for groceries, respondents named freshness and quality, price, speed of shopping, availability of certain brands and location in order of importance.

In meeting their needs, 86% of consumers surveyed said they shop at one to two grocery stores in a single shopping trip. Brands didn’t have much sway, however, in determining where they shop for groceries.

“Presumably, people shop at multiple stores to make sure they get the goods and brands they prefer. But what’s interesting is what we uncovered in the survey: 75% of respondents said that, in theory, they would shop at a grocery store despite it not carrying their favorite brands,” Schorr noted. “In fact, only 13% of respondents said that it was extremely important to them for a grocery store to carry their favorite brands.”

Still, one in four of those polled said better-designed packaging would affect their purchasing decisions in an Amazon Go store. Other packaging-related factors that consumers said would influence their Amazon Go purchasing decisions would be discounts and promotions on the packaging (57%), clearer messaging (24%), unique design (17%), and larger logos and brand presence on the label (2%). Thirty-five percent of Boomers indicated they were more interested in product variety than packaging.