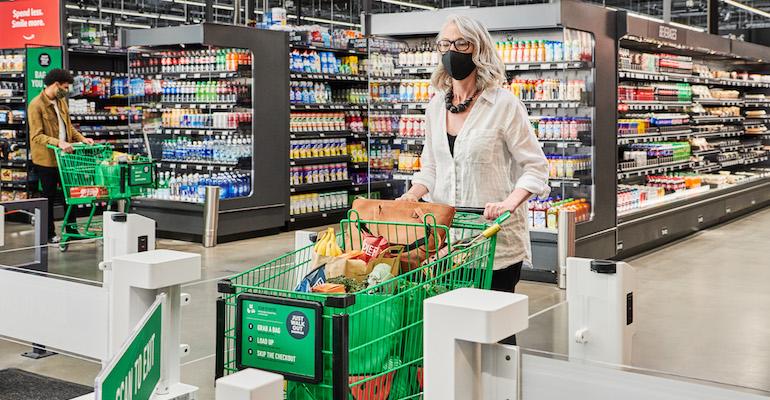 Amazon and H-E-B held their places as the No. 1 and No. 2 U.S. grocery retailers in the fifth annual dunnhumby Retailer Preference Index (RPI), with Market Basket displacing Trader Joe’s for the No. 3 spot.

In a year when a global pandemic underscored the importance of supermarkets, Amazon bested H-E-B and Trader Joe’s as the top U.S. grocery retailer in the fourth annual dunnhumby Retailer Preference Index (RPI).

The 2022 dunnhumby RPI, released yesterday, polled 10,000 U.S. households and evaluated more than 60 of the largest retailers in the $1 trillion U.S. grocery market, ranking them based on consumer emotional sentiment, execution in serving customer needs and financial performance. 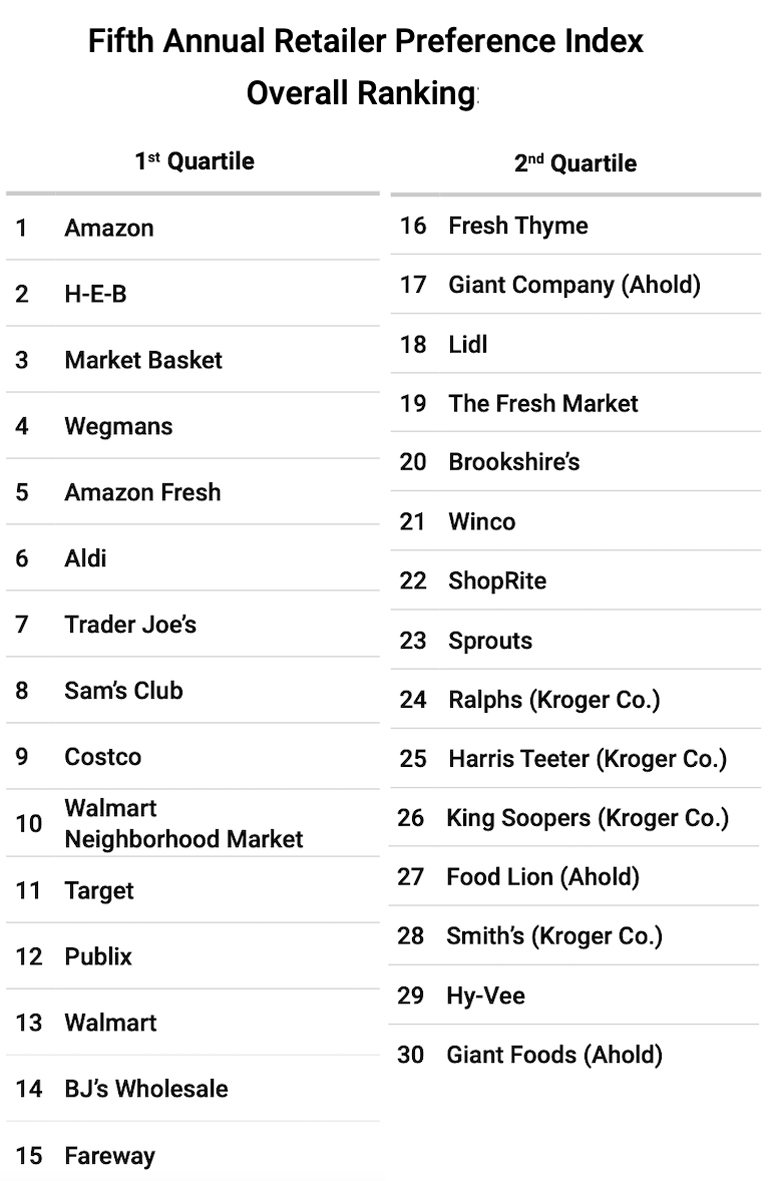 After Amazon, H-E-B and Market Basket in the top three spots, Wegmans Food Markets came in at No. 4, the same as in the 2021 RPI, while Amazon Fresh — Amazon’s nascent supermarket chain — made its debut on the list at No. 5, pushing Aldi down a notch to sixth place. Trader Joe’s finished at No. 7 after coming in third last year.

Sam’s Club (No. 8), Costco Wholesale (No. 9) and Target (No. 11) each fell one spot on this year’s list, while Walmart moved up one rung to No. 13 and its Walmart Neighborhood Market banner debuted at No. 10. Also making their premiere among the RPI’s first-quartile retailers were BJ’s Wholesale Club at No. 14 and Fareway at No. 15. Publix finished in the twelfth spot after taking ninth place last year.

“The pandemic has massively accelerated changes in how customers buy their groceries, and their behaviors are continuing to evolve,” Grant Steadman, president of Chicago-based dunnhumby North America, said in a statement. “2021 was the year that grocery retail became truly omnichannel. Retailers who delivered on their customers' evolving needs in-store and online performed best. This was mostly the larger players, who used their advantages to consolidate their positions.

“The challenges for most other retailers are significant, but a number of midsize grocers gained momentum by understanding their customers better and differentiating their offering accordingly,” Steadman noted. “The report aims to provide some direction on why and how retailers can best position themselves to win with customers, in this era of the ‘Great Reinvention’.”

The Top Finishers: A Closer Look 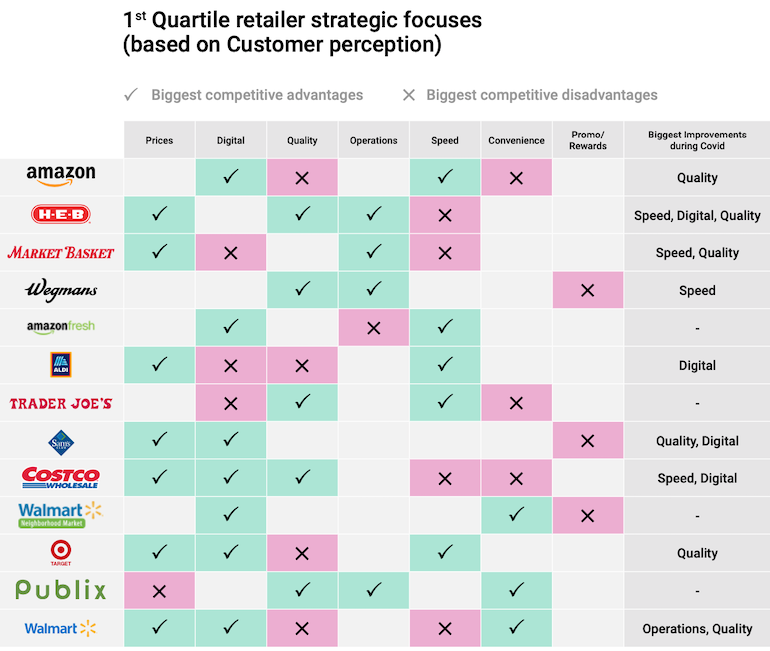 Grocery retailers able to differentiate themselves in the marketplace and serve the most relevant shopper needs — while being agile enough to change their formula as necessary and respond to shifting customer preferences — tend to have the strongest emotional bond with consumers and the most financial success, according to dunnhumby. That marked a change from last year, when a superior value perception — i.e. an attractive mix of price and quality — was the chief measure of success.

“Amazon, for the second year in a row, is the retailer with the strongest customer value proposition, a spot it took only for the first time last year. Amazon continues to benefit from the growing importance of digital and speed, which already happen to have been its biggest competitive advantages before COVID,” dunnhumby said in the report in a look at the top four finishers.

“H-E-B maintained its spot at No. 2, continuing to display its strategic superiority over the competition by holding its ground on its traditionally strong balance of great price perception and great quality perception, driven by its best-in-class private brand, while also making some of its biggest improvements during COVID in digital,” the study stated.

“Market Basket stole the No. 3 position from Trader Joe’s with its continued excellence on price and operations, while simultaneously making its biggest COVID-era improvements in speed. Market Basket is also like Trader Joe’s in that they don’t have a digital offering,” according to dunnhumby. “They have built value propositions based on what their specific customers want. BJ’s Wholesale, over the past two years, has moved steadily from the back of the 2nd quartile to make its debut as the only newcomer to the 1st quartile.”

Retailers Movin’ On Up

Among retailers in the 2nd quartile, Brookshire’s, Hy-Vee, Food Lion, The Giant Company and BJ’s made the biggest moves up the rankings, dunnhumby noted.

“Second-quartile grocers have opportunities to also rise rapidly in the rankings by reinventing their relationships with their customers. BJ’s Wholesale’s, The Giant Company’s and Food Lion’s focus on personalization of the customer experience through promotions, rewards and the right assortment helped them rise rapidly in the rankings. All three also delivered well-run operations that minimize out-of-stocks and maximize price consistency and logic. And most importantly, these three retailers delivered all of the above attributes without letting base price perception get too far behind Walmart, Costco and Aldi,” dunnhumby explained in announcing the 2022 RPI.

“Additionally, Brookshire’s and Hy-Vee also made big moves in the rankings due to their leadership in the omnichannel experience that saves customers’ time,” dunnhumby said. “They are among market leaders in both ease and customer service in e-commerce and speediness of the in-store shopping experience.”

Among key metrics in the 2022 RPI, grocery retailers who save customers time had an 8.5% five-year sales CAGR, and those who provide high-quality products/experience tallied a 7.2% five-year CAGR, dunnhumby revealed.

On the customer cost side of the equation, grocers offering “great” base prices generated a 7% five-year sales CAGR, well above the 2.5% CAGR of retailers focusing on highly personalized promotions and rewards, the study showed. At the same time, grocery chains that offer promos/rewards and minimize base price gaps had a 3.5% five-year sales CAGR versus a 1.3% CAGR for retailers that don’t do so.

“This doesn’t mean that personalization-led grocery stores should throw in the towel against Walmart and Aldi on base prices,” dunnhumby observed in the report. “On the contrary, battling back on base price is key to unlocking their maximum growth potential. If they can at least minimize gaps on base price to the point where there aren’t huge disadvantages, they can almost triple their long-term growth.”

Dunnhumby noted that Amazon’s top ranking over the past two years of the U.S. Grocery RPI reflect the momentum generated by e-commerce. 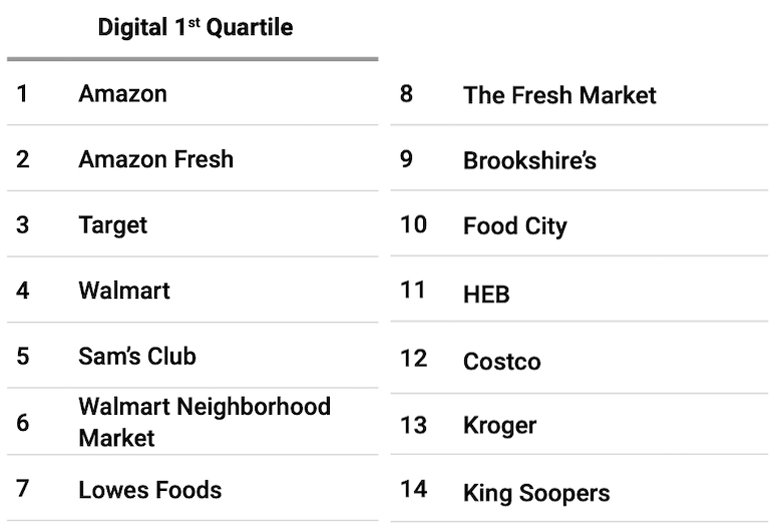 Unsurprisingly, then, Amazon and its Amazon Fresh brick-and-mortar banner came in Nos. 1 and 2 in the digital 1st quartile ranking, followed by Target, Walmart and Sam’s Club in the top five.

“Digital capabilities are more important than ever before. This is the first year ever where digital matters as much as quality,” dunnhumby said in the study. “COVID-era-driven customer shifts toward omnichannel are stickier than many had anticipated. These changes open a more relevant path for grocery retailers to drive competitive advantage. It is yet another opportunity for retailers to reinvent your relationship with customers.”

E-commerce’s share of overall grocery sales more than doubled during the pandemic, rising from 5% to 10% of sales, though half of the U.S. grocery shopping population currently doesn’t make their purchases online and has no plans to do so, dunnhumby reported. Almost all online shoppers still buy groceries in physical stores, where approximately 90% of all customer dollars are spent.

The 2022 RPI’s findings indicated that grocers using their own e-commerce platform — rather than third-party services such as Instacart — were better-perceived by customers in the shopping and delivery phases of digital transactions and performed better financially, dunnhumby added.