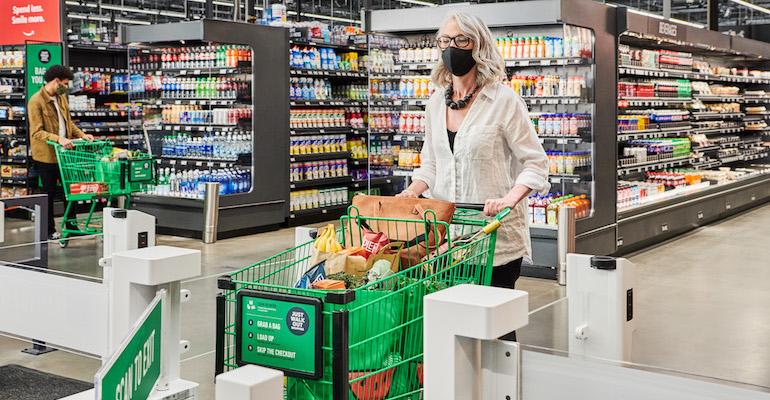 Amazon
Sales at Amazon's brick-and-mortar stores grew 13% in the third quarter, building on an 11% uptick in the prior quarter.
News>Retail & Financial

Amazon posted its second straight quarter of double-digit sales growth for its physical stores in the fiscal 2021 third quarter.

Related: What grocers can learn from a market basket analysis of Amazon Fresh

For the quarter ended Sept. 30, net sales rose 15% to $110.8 billion from $96.1 billion a year earlier, Amazon said yesterday after the market close. Excluding a $500 million favorable impact from year-over-year changes in foreign exchange rates throughout the quarter, sales growth remained at 15% versus a year ago, the Seattle-based company reported.

Online sales edged up 3% to $49.94 billion (3% excluding foreign exchange) from $48.35 billion in the prior-year period. Sequentially, online sales fell 6% from the second to third quarters.

Related: It’s a ‘Go’ for Amazon’s Just Walk Out at Whole Foods 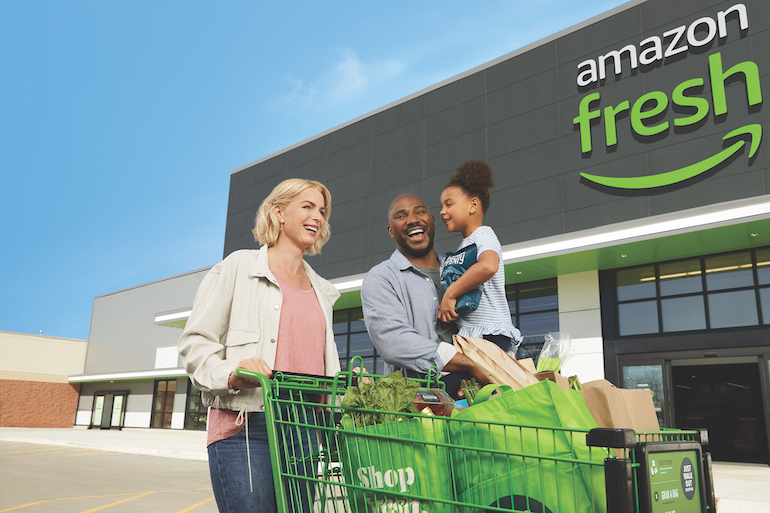 The Amazon Fresh retail banner expanded from 15 to 19 stores as of the third quarter.

Amazon’s brick-and-mortar store sales, which include Whole Foods Market, surged by  13% (12% excluding FX) to $4.27 billion in the third quarter from $3.79 billion a year ago. That built on an 11% gain in the second quarter and continued a rebound from a 15.5% decrease in the first quarter. Amazon totaled physical store sales of $16.22 billion in fiscal 2020, down 5.6% year over year.

Amazon Fresh has expanded from 15 to 19 U.S. locations since the end of the second quarter. Most recently, new stores opened in Chevy Chase, Md., and in Washington, D.C.’s Logan Circle. The company has phased out its Amazon Go Grocery banner, converting one store in Seattle’s Capitol Hill section to Amazon Fresh and closing the other Go Grocery location in Redmond, Wash.

“We have a number of different brands and store types, Whole Foods being the largest,” Amazon Chief Financial Officer Brian Olsavsky said late Thursday in a conference call with analysts. “We’ve said that we want options for customers to be able to shop online and in-store, and I think you’re seeing that probably most predominantly with the grocery offerings and the Whole Foods footprint that we’ve got out there. And the goal around this is to really raise the bar for what customers can expect with this omnichannel experience. So we like the hybrid model, and we’re working on continuing to evolve on a lot of interesting in-store experiences that will resonate with customers. We know that customers like to have a choice.” 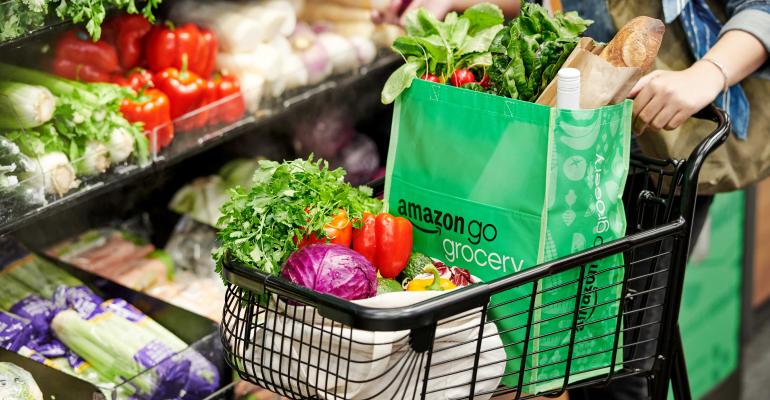 Amazon has discontinued the Amazon Go Grocery banner, closing one store in Redmond, Wash., and converting the other store in Seattle’s Capitol Hill section to Amazon Fresh.

One of those experiences is expansion of Amazon’s Just Walk Out cashierless technology, which enables customers to pay for their purchases while skipping the checkout line. Last month, Amazon announced plans to bring Just Walk Out to Whole Foods stores, starting with new locations in Washington, D.C., and Sherman Oaks, Calif., slated to open next year.

Just Walk Out launched at Amazon Go stores and then was offered at the former Amazon Go Grocery stores in the United States and Amazon Fresh store in West London before debuting the technology at a new Amazon Fresh supermarket in Bellevue, Wash., this past June. The Bellevue Amazon Fresh opening marked the premiere of Just Walk Out in a full-size grocery store. U.S. Amazon Fresh stores also offer the multifunction Amazon Dash Cart smart shopping cart, which allows users to find items, track purchases and skip the checkout line.

“Some of the things that we continue to be excited about, and do a lot of work on, are things like the Just Walk Out technology that’s been in our Amazon Go stores and has now moved into some of our Amazon Fresh stores. Just [Walk Out] really eliminates one of those things that people may not realize is such a hassle, waiting in line, and has been positively received by customers,” Olsavky explained. “Another technology we have now in a little over 70 of our physical retail stores is Amazon One, which is a contactless way for folks to enter stores using their palm to identify. So that’s in [Amazon’s] retail stores and Whole Foods stores. So keep looking for us to roll that out. I’d say with these technologies, too, there are opportunities beyond the Amazon physical-store footprints.” 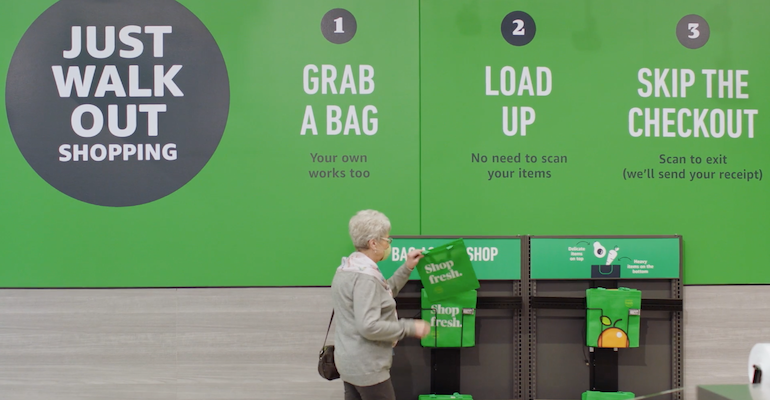 “You’re starting to see Just Walk Out going in sports, a large arena-type environment, and Amazon One is at some good locations. We’re excited to employ both those technologies in Climate Pledge Arena here in Seattle,” Olsavky said. “So look for us to keep iterating on those and finding other new innovative ways for customers to enjoy a unique shopping experience.”

For the third quarter, Amazon fell just short of Wall Street’s consensus sales projection. On average, analysts forecast quarterly sales of $111.6 billion, with estimates ranging from $109 billion to $116 billion, according to Refinitiv.

“We’ve always said that when confronted with the choice between optimizing for short-term profits versus what’s best for customers over the long term, we will choose the latter — and you can see that during every phase of this pandemic,” Jassy said in a statement. “In the first several months of COVID-19, Amazonians played an essential role to help people secure the requisite PPE, food and other in-demand items needed, and we worked closely with businesses and governments to leverage AWS to maintain business continuity as they responded to the pandemic.

“It’s also driven extraordinary investments across our businesses to satisfy customer needs — just one example is that we’ve nearly doubled the size of our fulfillment network since the pandemic began,” he noted. “In the fourth quarter, we expect to incur several billion dollars of additional costs in our consumer business as we manage through labor supply shortages, increased wage costs, global supply chain issues, and increased freight and shipping costs, all while doing whatever it takes to minimize the impact on customers and selling partners this holiday season. It’ll be expensive for us in the short term, but it’s the right prioritization for our customers and partners.”