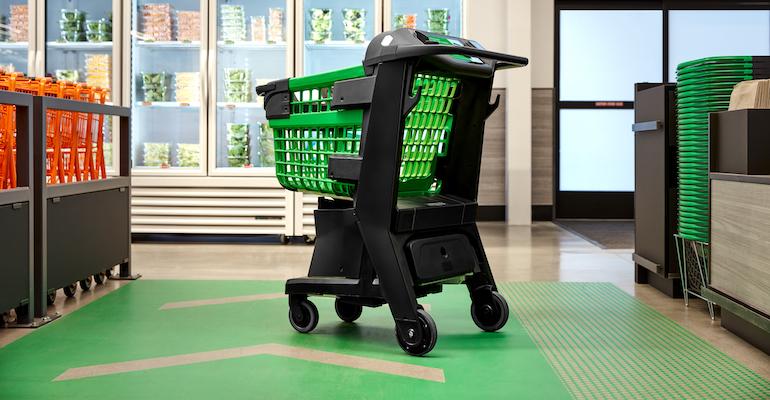 Amazon has developed a “smart” shopping cart that keeps track of shoppers’ purchases and allows them to complete their transaction while exiting the store.

Called the Amazon Dash Cart, the cart uses computer vision algorithms and sensor fusion technology to identify items that customers place in its basket. To pay, shoppers walk through a special Amazon Dash Cart lane, where sensors automatically identify the cart and the items selected, and their payment is processed using the credit card on their Amazon account.

Plans call for the Amazon Dash Cart to be available at the Amazon grocery store slated to open this year in Woodland Hills, Calif., Amazon said Tuesday in announcing the new cart. No further plans for introducing the cart at other Amazon stores selling groceries — such as Amazon Go Grocery, Whole Foods Market and Amazon Go convenience stores — have been disclosed, according to spokeswoman for the Seattle-based company.

To shop with the Amazon Dash Cart, Amazon Grocery customers first sign into their Amazon account by scanning the Amazon app QR code on the reader next to the digital screen near the cart’s handle. They then put bags into the cart and begin shopping. 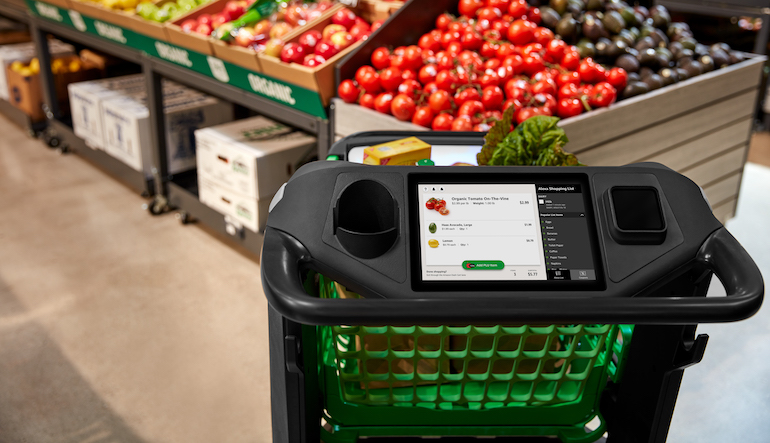 As shoppers take products off shelves and place them in the bags, the cart beeps to signify that the item’s barcode has been read and recorded as a purchase. If the light at the top of the basket turns orange, customers remove the item and try again. To add products without a barcode, such as fresh produce, shoppers tap the “Add PLU Item” button on the cart’s screen and then type in the item number. The item’s weight is confirmed and displayed on the screen when the product is put in their bag.

Customers can see a running tally of their purchases on the cart’s screen. Once done shopping, they exit the store through the Amazon Dash Cart lane, which records their transaction. A receipt is emailed to the shopper. Associates are on hand at the store to assist shoppers, Amazon said.

Other Amazon Dash Cart features include the ability for customers to access their Alexa Shopping List, enabling them to check off items and view their subtotal, as well as a coupon scanner that lets users apply store coupons as they shop.

The Amazon Dash Cart’s functionality reflects the “Just Walk Out” cashierless technology used in the Amazon Go Grocery and Amazon Go c-stores. The Go stores employ overhead cameras, weight sensors and deep learning technology to detect merchandise that shoppers take from or return to shelves and keep track of the items selected in a virtual cart. Customers use the Amazon Go app to gain entry to the store through a turnstile. When they exit the store, the Just Walk Out technology automatically debits their Amazon account for the items they take and then sends a receipt to the app.

Amazon has confirmed plans to open a full-size supermarket in Woodland Hills during 2020, but the e-tail giant hasn’t disclosed a banner name or provided details about the store.

Reports of a new grocery store concept from Amazon — aside from Whole Foods — surfaced in March 2019. Published reports said Amazon has signed leases in the Los Angeles area (starting with locations in Woodland Hills, Studio City and Irvine) and is eyeing sites in metropolitan New York, New Jersey and Connecticut. Initial reports also said Amazon was in talks to open stores at shopping centers in San Francisco, Seattle, Chicago, Philadelphia and Washington, D.C., and was mulling potential acquisitions of small grocery retail chains.

About a month earlier, Amazon opened the first Amazon Go Grocery store, sized at 10,400 square feet, in Seattle. The company said it plans to open another in Redmond, Wash., but hasn’t disclosed a timetable.

Currently, Amazon lists 26 locations for the small-format Amazon Go concept, including in Seattle, San Francisco, Chicago and New York. Most were temporarily shut down starting in late March due to the COVID-19 pandemic, but the Amazon Go website lists seven as still temporarily closed, including two in San Francisco undergoing renovations. The employee-only mini outlet in Seattle's Macy's building also remains temporarily closed. Other than that location, which is sized at 450 square feet, the Amazon Go stores range from 1,200 to 2,700 square feet.