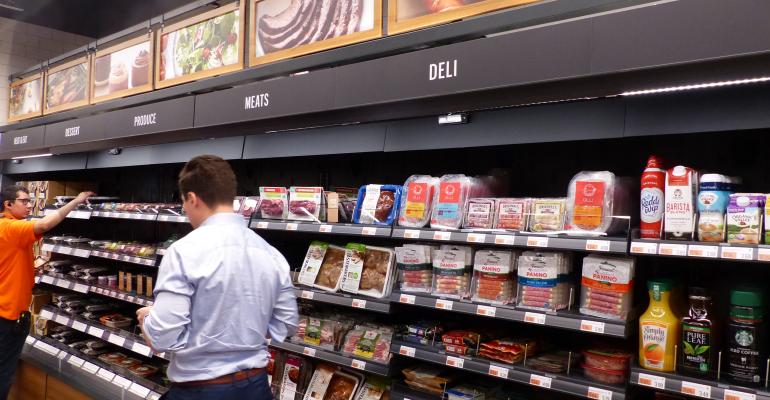 Amazon reportedly is moving forward with the opening of U.S. grocery stores separate from its Whole Foods Market subsidiary.

The Wall Street Journal reported Tuesday that Seattle-based Amazon aims to open a chain of stores beginning in Los Angeles, Chicago and Philadelphia. Citing anonymous sources, the Journal said the e-tailer has signed more than a dozen leases in the Los Angeles area, starting with locations in Woodland Hills, Studio City and Irvine that could open by the end of this year.

These grocery stores would be part of dozens that Amazon plans to open nationwide, according to the Journal. The retailer also is eyeing sites in metropolitan New York, New Jersey and Connecticut, including spaces of 20,000 to 40,000 square feet in shopping centers, the report said.

Asked about the Journal’s report, an Amazon spokeswoman on Tuesday said the company “doesn’t comment on rumor and speculation.”

News that Amazon was planning to launch another grocery store business emerged in early March. At the time, the Journal said Amazon was in talks to open stores at shopping centers in San Francisco, Seattle, Chicago, Philadelphia and Washington, D.C., and was mulling potential acquisitions of small grocery retail chains.

With the Whole Foods acquisition, Amazon signaled its intention to incorporate physical stores under an omnichannel grocery retail strategy. The company has been rolling out its Prime Now online grocery delivery and pickup program to Whole Foods stores since early last year and now has it available in 88 cities for delivery and 30 markets for pickup.

Whole Foods’ store count has risen by 36 locations since the closing of its acquisition by Amazon in late August 2017. At the time, Whole Foods had 468 stores overall. The Austin, Texas-based grocery chain now has 504 stores, including 483 in the U.S.

Although not a direct competitor to supermarkets, the cashierless Amazon Go convenience store format is also seen as a threat to brick-and-mortar food retailers. Amazon now operates 16 Go stores in Seattle, San Francisco, Chicago and New York. Two more are upcoming in Chicago. Published reports have said that Amazon Go outlets may pop up in new types of locations such as airports and grow to as many as 3,000 outlets over the next several years.

In January, e-commerce specialist Edge by Ascential predicted a major grocery expansion by Amazon, saying that 2019 could be the start of when “grocery finally hits” for the company. Edge said Amazon’s grocery sales surged 45% in 2018, though that was less than the nearly 60% growth in 2016-2017.

Amazon posted virtually flat sales at its physical stores for the second quarter ended June 30. The company said sales at physical stores totaled $4.33 billion for the quarter ended June 30, up 0.4% from $4.31 billion a year earlier. Excluding the impact of foreign exchange rates, sales rose 1%. Sequentially, physical-store sales gained 0.5% from just under $4.31 billion in the 2019 first quarter.