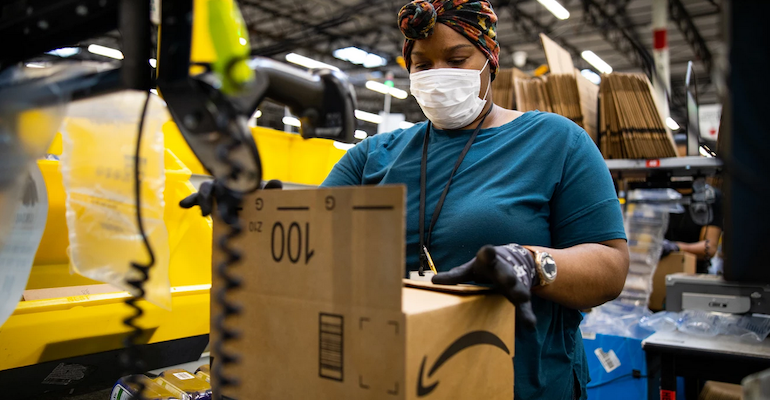 Amazon
The margin against organizing was more than 2-1 in the widely anticipated vote, which aimed to form what would have been the first union at Amazon.
News>Retail & Financial

Amazon warehouse workers in Alabama give thumbs-down to union

RWDSU, UFCW call for ballot review and probe of Amazon’s behavior in lead-up to vote

Employees at Amazon.com Inc.’s warehouse in Bessemer, Ala., have voted decisively against unionizing, shooting down an attempt to establish what would have been the first union at the online retail giant.

Published reports said Friday that the margin against organizing was more than 2-1 in the widely anticipated vote. Reuters reported that representatives from the National Labor Relations Board (NLRB) tallied 1,798 votes against and 738 votes for forming a union. The vote required only a simple majority to institute the union.

Rejection of the union dealt a big setback to labor leaders, who saw an opportunity to organize workers at one of the world’s largest companies, which has been accused of engaging in anti-union practices. The union drive was led by the New York-based Retail, Wholesale and Department Store Union (RWDSU), which would have represented the Amazon warehouse workers.

According to The New York Times, roughly half of the 5,876 eligible workers at the Bessemer warehouse voted, and about 500 ballots were contested, primarily by Amazon. The challenged ballots ended up not being counted due to the margin of votes against the union.

“Thank you to employees at our BHM1 fulfillment center in Alabama for participating in the election. There’s been a lot of noise over the past few months, and we’re glad that your collective voices were finally heard. In the end, less than 16% of the employees at BHM1 voted to join the RWDSU union,” Seattle-based Amazon said in a statement on Friday.

“It’s easy to predict the union will say that Amazon won this election because we intimidated employees, but that’s not true. Our employees heard far more anti-Amazon messages from the union, policymakers and media outlets than they heard from us,” Amazon stated. “And Amazon didn’t win — our employees made the choice to vote against joining a union. Our employees are the heart and soul of Amazon, and we’ve always worked hard to listen to them, take their feedback, make continuous improvements, and invest heavily to offer great pay and benefits in a safe and inclusive workplace. We’re not perfect, but we’re proud of our team and what we offer, and will keep working to get better every day.”

RWDSU said Friday it’s filing objections to the conduct of the vote plus related Unfair Labor Practice (ULP) charges with the NLRB. RWDSU claims Amazon interfered with the right of the Bessemer employees to vote in a “free and fair election,” which the union said is protected under Section 7 of the National Labor Relations Act. The ULP complaint alleges Amazon unlawfully interfered with the right of employees to engage in union activity.

Plans call for RWDSU tp request that the NLRB regional director schedule a hearing on its objections to decide if the results of the election should be set aside.

“Amazon has left no stone unturned in its efforts to gaslight its own employees. We won’t let Amazon’s lies, deception and illegal activities go unchallenged, which is why we are formally filing charges against all of the egregious and blatantly illegal actions taken by Amazon during the union vote,” RWDSU President Stuart Appelbaum said in a statement on Friday.

“Amazon knew full well that unless they did everything they possibly could, even illegal activity, their workers would have continued supporting the union. That’s why they required all their employees to attend lecture after lecture, filled with mistruths and lies, where workers had to listen to the company demand they oppose the union,” according to Appelbaum. “That’s why they flooded the internet, the airwaves and social media with ads spreading misinformation. That’s why they brought in dozens of outsiders and union-busters to walk the floor of the warehouse. That’s why they bombarded people with signs throughout the facility and with text messages and calls at home. And that’s why they have been lying about union dues in a right-to-work state. Amazon’s conduct has been despicable.”

United Food and Commercial Workers International (UFCW), which represents 1.3 million workers in the food and retail sectors, also called for a review of the ballots cast in the Amazon union election in Alabama. Washington-based UFCW and its RWDSU affiliate also seek an investigation into what they called “union-busting tactics” by Amazon in the lead-up to the vote.

“Amazon workers in Alabama are ready to unionize and are speaking out for the safer working conditions they have earned as frontline workers during this pandemic. Today’s initial tally of votes in this election is just the beginning of this process, and a full review of ballots must be conducted, given Amazon’s ruthless intimidation campaign to pressure its Bessemer employees not to unionize,” stated UFCW International President Marc Perrone. “These Amazon workers fought valiantly to build a better life and have inspired millions of essential workers across the country with the courage they showed by making their voices heard in this union election.”

Amazon engaged in “an attempt to silence its Alabama workers,” and UFCW and the RWDSU Council aim to “expose the ruthless worker intimidation campaign led by Jeff Bezos to tip the scales against these Amazon workers seeking to unionize,” Perrone said.

“It is more clear than ever that Congress must pass the PRO Act and put an end to the vicious attacks waged by companies like Amazon that are hell-bent on denying their employees the right to form a union,” he added, referring to the Protecting the Right to Organize Act passed by the U.S. House last month. The legislation would provide protections to workers trying to organize and limit what companies can do to disrupt union membership campaigns.

Amazon cited its job creation — especially during the pandemic — as well as its competitive wages and health care benefits in emphasizing the company as an attractive workplace.

“We hope that with this election now over, there’s an opportunity to move from talk to action across the country. While our team is more than a million people around the world and we’ve created 500,000 new jobs since COVID began, we’re still a tiny fraction of the workforce,” Amazon stated. “There are 40 million Americans who make less than the starting wage at Amazon, and many more who don’t get health care through their employers, and we think that should be fixed.

“We welcome the opportunity to sit down and share ideas with any policymaker who wants to pass laws ensuring that all workers in the U.S. are guaranteed at least $15 an hour, health care from day one, and other strong benefits,” the company added. “Our employees have seen tremendous benefit from what we offer, and we think every American family deserves the same. We believe that we can work better together instead of against each other to pass those important laws, and we hope that’s what will happen in the months and years ahead.”