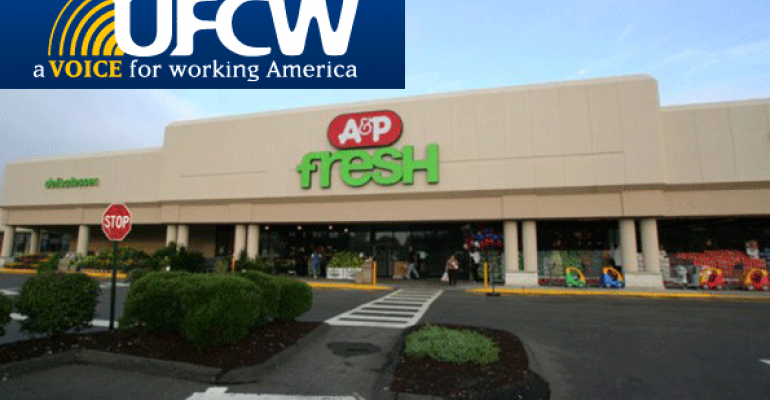 A&P’s second bankruptcy in five years — one that looks likely to spell a final end to the 156-year-old supermarket icon one way or another — was precipitated by what it called “unsustainable” labor costs, and a failed attempt to turn around sales despite $500 million in new investment from private owners and an assist from union givebacks when it emerged from bankruptcy protection in 2012.

A plan to recover funds for the estate by way of a rapid-fire “sale strategy” requiring labor concessions on a tight timeline will be a central challenge of the case, observers told SN. This may also raise questions as to how A&P’s owners, management and lenders oversee the company and its finances since the emergence, they added.

Rivals Acme Markets (76 stores), Stop & Shop (25 stores) and Key Food (19 stores) have emerged as leading bidders for 120 A&P-owned stores in what is planned to be the first round of store auctions, while the company is also seeking court approval to close 25 stores.

The so-called “stalking horse” bids could raise $600 million — but are conditioned upon being free from labor obligations that A&P insists are at the heart of its troubled cost structure. A&P warned of “catastrophic” consequences if their collective bargaining agreements cannot be restructured promptly, including a “fire sale” liquidation of all its assets.

Noting that its bankruptcy financing is also contingent upon meeting a tight schedule for store sales and transfers, the retailer in a disclosure said it could seek to unilaterally reject all or parts of its labor agreements under sections 1113 and 1114 of the U.S. Bankruptcy Code.

That stance has drawn a strong reaction from the United Food and Commercial Workers, which in a statement on behalf of 13 local chapters affected by the bankruptcy, expressed a willingness to negotiate with new employers, but warned “we will fight back with everything we have if A&P or its financial backers attempt to further exploit our members.”

The union noted it already made sacrifices as part of A&P’s previous bankruptcy case, which was filed in 2010 and completed in 2012. That agreement, calling for a wage freeze and reduction in vacation and other benefits, represented more than $600 million in givebacks, union sources told SN.

In a disclosure statement filed with U.S. Bankruptcy Court in July, A&P chief restructuring officer Christopher McGarry however referred to the labor savings as “a modest reduction,” saying that the 2010 bankruptcy was triggered primarily by a need to rationalize its store base and renegotiate supply and distribution contracts.

“These initiatives were expected to revitalize A&P’s businesses and generate material savings that would then permit the company to thrive within the competitive grocery industry,” McGarry said.

McGarry acknowledged that the company failed to meet projections of its 2012 emergence, including falling short by about half on a plan to spend more than $500 million on capital expenditures over a five-year period. As a result, he said, “stores have remained outdated and/or underinvested, making it difficult to attract and retain new customers during a crucial time of rebranding and rebuilding.”

That rebranding — which included temporary price reductions and a commercial campaign featuring then-CEO Sam Martin inviting customers back to a chain that was rebuilding  behind revamped products and locally-tailored stores — also fell short, McGarry said, noting that while store traffic increased, price cuts led to heavy losses. “Although [A&P’s] strategy drew more customers to their stores, such efforts were at the expense of margin income and the debtors were not building productive, long-lasting relationships with their customers,” McGarry wrote.

Martin, a veteran of companies backed by Yucaipa Cos., which led the new equity investment that sprung A&P from bankruptcy, left the company in late 2013. He was not available for comment.

One local observer, who asked not to be identified, said A&P’s labor pressures need to be examined in perspective with the decline in sales volumes.

“A&P’s problem was a sales problem and a culture problem, not necessarily a labor problem,” the source told SN. “Labor costs need to be considered in relation to productivity, and if your stores are doing decreasing volumes, of course your productivity is going to be poor.”

With the company losing $28 million a month during the first six months of fiscal 2012, A&P scaled back price investments, cut spending, and began efforts to monetize assets including raising $200 million in sale-leasebacks. These efforts helped to stabilize the company, McGarry said, but sales continued to slide.

A subsequent effort to sell the company in 2013 did not result in an offer, and financial performance continued to decline. A&P lost $68 million in 2013 and $305 million in fiscal 2014, when sales declined by 6%.

Yucaipa’s partner in the equity investment, Mt. Kellett Capital Management, has become A&P’s largest owner, filings show. Mt. Kellett as of the filing controls 77.27% of the stock in the company and Yucaipa, the Ron Burkle-led provate equity firm with a long history of food retail investments, now holds 22.73%.

According to published reports, Mt. Kellett has been struggling as a result of soured investments in energy companies and this spring required a $200 million bailout from Fortress Investment Group. Officials of Mt. Kellett were not available for immediate comment.

Fortress is providing $100 million in debtor-in-possession financing for A&P but according to court filings it is contingent upon a furious pace of store sale procedures including having the court enter orders for bid procedures within 20 days of the filing and for A&P to have consummated sales by Oct. 30.

A&P said legacy union contracts — particularly “bumping” clauses allowing for more senior members of the workforce to take jobs from less experienced employees in the event of layoffs — put pressure on costs to the point where it was more efficient to keep money-losing stores open than to close them and infect surrounding stores with higher costs.

“The debtors have explored all possible alternatives and pursued numerous strategies to ‘right the ship,’” McGarry concluded. “The last three years have demonstrated, however, that the sale strategy is the only viable path forward.”

If the sale strategy proceeds as planned, competitors would benefit not only from the addition of new stores to their portfolio, but the potential removal of dozens of sites expected to close, or convert to other uses.

“Everybody’s a winner,” Flickinger said. “Ahold is a winner, Acme and Albertsons are winners and Key Food is a winner, and if some stores go to Kings or anyone else, they’re winners. Because they are good locations, and even with average management they could be quite profitable.”

Meeting the timeline of those proposed sales will be a challenge that might require court-ordered negotiation between A&P and its unions. On Thursday, the UFCW published a letter from president Marc Perrone to Peter Briger, co-chairman of Fortress, decrying “draconian terms and timelines” of the financing facility and offering to negotiate terms that would better serve the 29,000 union workers who could be affected by the bankruptcy.

Conflicts like these have the potential to turn into lawsuits themselves, sources told SN, with one observer saying “things could get very messy.”

Flickinger said the role of A&P’s management and its owners leading to the bankruptcy could also come into question.

“The judge really needs to look at private equity and find out how much money has been streamed from the company to private equity, and look at all the contracts that appear to not have been addressed for rejection for rejection or corrective action.”