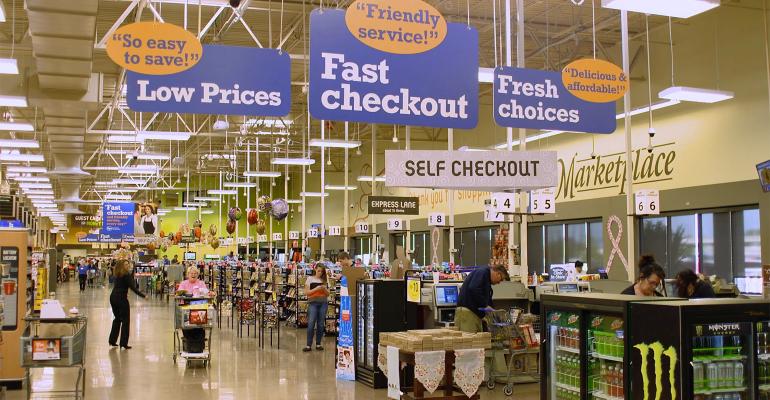 Analysis: It could have been worse for Kroger

Kroger Co. on Friday said sales were expected to remain positive despite an operating environment that turned more challenging over the summer behind deflation and subsequent price competition — along with souring consumer sentiment.

As previously reported, non-fuel comparable-store sales gains for the second quarter were a modest 1.7% at Kroger and forecast to grow only by 0.5% to 1.5% for the remainder of the year, figures down considerably from the company’s expectations earlier this year.

Company officials emphasized the performance highlighted Kroger’s ability to handle bumps in the road better than most — a sentiment echoed by several analysts.

“All things considered and given this [week’s] bad news from peers, we find the [results] to be better than feared, and we continue to view Kroger as a bellwether within the industry,” Christopher Mandeville, an analyst at Jefferies, said in a research note.

Rodney McMullen, Kroger’s CEO, in a conference call with analysts said Kroger limited the financial impacts of the sales slowdown through expense cuts, while relying on customer insights to guide strategic investments “rather than simply reacting to competitors.” McMullen also emphasized a focus on long-term strategies, saying it would dial back on planned capital investments by about $500 million for the remainder of the year to provide flexibility to repurchase stock if market conditions provide the opportunity.

“Customer insights give us a big advantage in challenging environments like this one,” McMullen said. “A lot of what we are seeing suggests a gradual tightening of budgets. Our customers tell us they are less confident about the economy now than they were three months ago, and they expect the economy to get worse in the next three months.”

The irony of worsening consumer sentiment settling in place as prices continue to fall isn’t lost, McMullen acknowledged. “Most people are saying the basket of goods costs more money, but in fact we know that it isn’t. Helping the customer see that is always a challenge for us and our competitors as well.”

Officials estimated Kroger experienced deflation, excluding pharmacy, of 1.25%, including 1.5% deflation in the grocery category. Produce experienced less inflation in the second quarter than in the first, officials added. Although reports suggest several areas of the country have been experiencing especially fierce competition as retailers chase volume as prices decrease, Kroger officials stopped short of describing the competitive environment as “irrational.”

“We see a little bit of everything out there,” Michael Schlotman, Kroger’s CFO, said. “You see people … doing things in one geography and not in other geographies. And then you see regionals doing particular things in and out of different promotions and then other people continuing to make investments in price. And we do a little bit of all those as well.

“I think the thing to keep in mind is we don't always necessarily just react to what particular competitors are doing,” he added. “With our relationship with [data insights firm] 84.51°, we put significant science behind how and when we make price investments, whether it's promotional activity or a permanent price reduction.”

Not all shoppers are pivoting decisions about where to shop based solely on price, McMullen added. “They also look at the quality of the fresh departments. What are the products that are being offered? What's the variety there? And then a really critical part is how do the associates engage and how they treated and how long does it take when you're in line?”

Kroger, for example, has been adding labor to stores to support the tonnage growth of sales in meat that came along with the lower prices, McMullen said. “This increases our cost as a rate of sales but without this investment, the shopping experience would be negatively affected.”

Kelly Bania, an analyst for BMO Capital Markets, in a research note published Friday said the results for Kroger looked good in the context of a struggling food retailing environment, but cautioned that conditions could continue to deteriorate, making even lower expectations appear optimistic.

“While expectations were increasingly lower into the quarter in recent weeks as other food retailers have more drastically cut guidance on the heels of accelerating deflation, we think these results may not be as bad as feared,” she said. “However, given our expectation for deflation to accelerate in the fall and linger into the [the first half of the new fiscal year], we believe the question going forward will be, ‘Is [guidance] conservative enough given low visibility?’”

The decrease in capital expenditures will result in some capital projects pushed to future dates, officials said, likely to result in fewer net new stores than previously anticipated.

Kroger shoppers are taking it personally with their smartphones
Aug 30, 2016