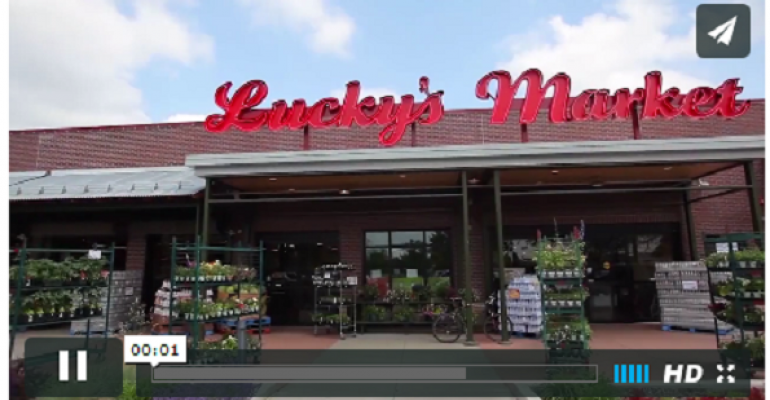 Sure enough Kroger is taking on a small-format, fresh grocer that will lead it into Florida — only it’s not the vehicle anyone expected.

Only weeks after dropping out of an auction for The Fresh Market, Kroger surprised the industry Friday by announcing a significant investment in Lucky’s Market — a small but trend-right and strategically positioned farmers' market concept that can provide the Cincinnati-based giant a potentially effective weapon against the runaway success of Sprouts Farmers Market — and a jump on Whole Foods Market, which is developing the 365 format with similar goal in mind, industry observers told SN. The investment also represents an opportunity for Kroger to make entry into Florida, where Lucky’s operates three of its 17 stores — and has plans for at least five more.

Niwot, Colo.-based Lucky’s — run by former executives behind Wild Oats and Sunflower Markets — has been described as a “Sprouts on steroids,” offering a similarly sized fresh and value focused format, only with a more elaborate prepared foods component, service departments and particular appeal to the “foodie” culture. Founder Bo Sharon, a trained chef, told SN in a 2014 interview Lucky’s ethic was “affordable, good food” or as the company slogan puts it “organic for the 99%.”

“It’s heavily based on local and organic food, but there’s also a conventional mix because, as we say, ‘Drano opens drains.’ Sometimes you need that,” he explained. “From a chef’s background, there’s tradition in Grandma’s recipes. So where a recipe calls for a can of mushroom soup, don’t mess around with it. We respect the iconic, American brands, because they serve a purpose.”

Lucky's operates 17 stores, and has plans for at least five more.

Although Kroger has not disclosed the size of the investment in Lucky’s, Scott Mushkin, an analyst following the retailer for Wolfe Securities, told SN on Friday he suspected the investment was “fairly substantial” and indicated Lucky’s was “essentially coming under the Kroger umbrella.”

Mushkin described the move as another signal of Kroger’s aggressive, ongoing pursuit to “own the middle- to high-end grocery shop.”

Kroger has the data to understand that customer, he noted, with Lucky’s only the latest investment to support it. Lucky’s, in turn, is gaining enormous new advantages in scale and buying power, making the prospect of a Sprouts competitor a very real threat.

“Kroger knows better than anybody what this shopper wants, and they are going after it, and they have the financial wherewithal to do it with better prices than anyone,” Mushkin said. “It should put the fear of God in their competitors.”

Jay Jacobowitz, president of natural food consultant Retail Insights, Brattlevoro, Vt., told SN in an interview Friday that he felt the success of Sprouts has both conventional and specialty natural superstores scrambling to latch onto a vehicle with similar growth potential.

The deal also comes with fewer risks than an acquisition of The Fresh Market — a struggling chain which Kroger evidently pursued, but ultimately passed on, only weeks ago. Although that chain comes with significantly larger footprint — particularly in Florida — it is only beginning what is expected to be a costly and lengthy turnaround.

“Lucky’s is probably cheap by comparison, and if it doesn’t pan out, then it’s not a huge loss,” Jacobowitz said. “What this speaks to is the rapid evolution of the food industry behind fresh and better quality food, and Kroger’s urgency to get out in front of it.”

Lucky’s had financed its early growth in part through the federal EB-5 program, offering foreign entrepreneurs the opportunity to apply for permanent U.S. residence in exchange for job-creating investments in U.S. businesses. The video posted below illustrates Lucky’s pitch to potential investors from China, detailing plans to build as many as 40 stores that way. Sources said the Kroger investment would allow Lucky’s to grow faster than the EB-5 structure would have.

“CEO Bo Sharon is a foodie and a former chef; this is very clear when tasting the prepared foods,” Moses added. “Bo’s commitment to the Lucky’s mission and ethos — which is shared by Lucky’s team members in a special, family-oriented way — are also plainly evident from the positive energy in Lucky’s stores.”

Although Lucky’s has not shared financial results, Jacobowitz said “if all their stores are doing as well as the ones I’ve seen in Colorado their sales volumes are probably just as good as Sprouts or Natural Grocers by Vitamin Cottage, if not better. Lucky’s has the edge over Sprouts and NGVC in a more evolved prepared foods program, and that is the strategic ‘point of the spear’ in the fresh quality foods movement.”