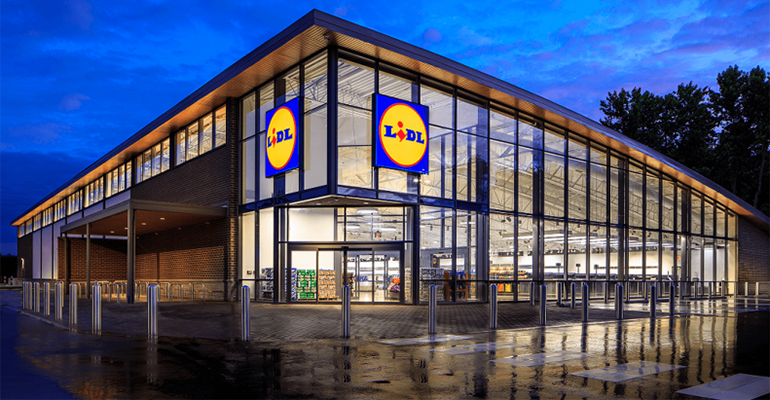 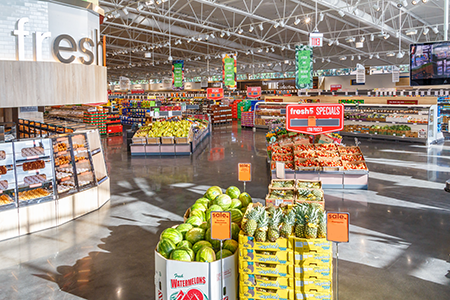 At the center of the battle is suburban Long Island, N.Y., where Best Market has 24 of its stores. Germany-based Lidl, whose U.S. headquarters is in Arlington, Va., edged into the metro area in late 2018 with the opening of stores in Union, N.J., and Staten Island, N.Y. Also, two of the Best Markets purchased by Lidl are in New York City and one is in New Jersey.

“There’s a tremendous population density in the New York metropolitan area, obviously in the city itself but also out on Long Island and Staten Island and in areas of North Jersey,” said Bill Bishop, chief architect at strategic advisory firm Brick Meets Click. “Once it became evident that Lidl was willing and able to morph its stores, the sales potential in a market like metro New York will allow them to grow very quickly. That’s what they were able to do in London.”

Related: Against Aldi and Lidl, personalization is the smart move

Lidl plans to convert the Best Market stores to its banner over the next two to three years in a “step-by-step transition process,” according to William Harwood, director of communications for Lidl US. Currently, the retailer operates more than 65 stores in Virginia, the Carolinas, Georgia, Maryland, Delaware, New Jersey, Pennsylvania and New York.

“It’s not new for Lidl to move into the more metropolitan areas, and what you have now is a sort of double shot,” said Katrijn Gielens, associate marketing professor at the University of North Carolina Kenan-Flagler Business School. “Yes, they are price fighters. But on top of that, they are on the side of convenience, in the sense that you don’t have to look for a store because they want to move as close as possible to consumers.”

But Lidl and rival discount grocer Aldi aren’t just a value play, noted Gielens. “Everyone who talks about them focuses on price, but they also want to emphasize very much that they make your life so much easier,” she said. “They make it easy to go to the store, and when you walk in you’re not overwhelmed by choice. In a metropolitan area, that may resonate very well with consumers and may be a very strong threat to other retailers.” 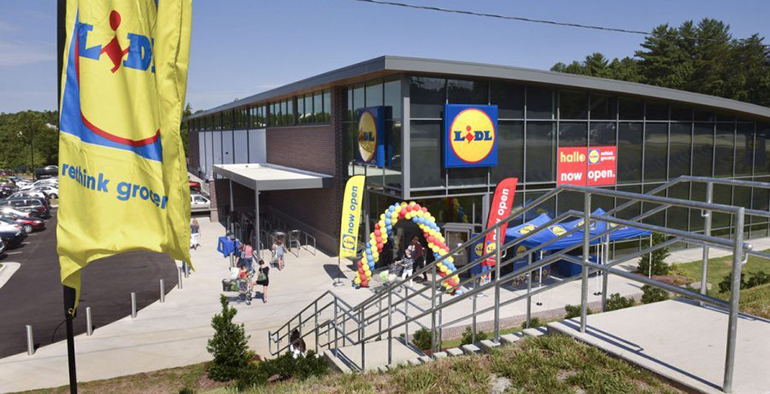 Shopper interest in hard-discount grocery stores is high. When Lidl was gearing up for its June 2017 U.S. launch, a Bain & Co. survey found that over 70% of consumers would try a Lidl store if one was nearby. “And the biggest reason people weren’t trying them was that they weren’t available,” said Kent Knudson, a partner in Bain’s retail practice.

“When Lidl entered the Mid-Atlantic states, they were aggressive about getting out the message of what their offering was like, and you saw a lot of customer trial. I would certainly expect to see that again,” he said, referring to the acquired Best Market stores.

Stop & Shop will be extending its lead even further. In early January, the chain purchased King Kullen, whose 37 supermarkets on Long Island will join the 51 Stop & Shop locations there, which this year are slated to be upgraded to the retailer’s latest store concept.

This fall, Wegmans Food Markets is slated to open a store in Brooklyn — its first New York City store — while Walmart aims to convert its Farmingdale, N.Y., store to its second Long Island supercenter. And earlier this month, Whole Foods opened its fourth Long Island store in Commack.

“I foresee that there are going to be more mergers and acquisitions, as everybody tries to sort of pre-empt a lot of retail locations. They’re not necessarily interested in the retailers they’re buying as much as the real estate,” Gielens said. “It’s now going to be very much a battle for the best locations to compete against these convenience-based retailers. That is probably going to be the biggest battle over the next couple of years.”

Best Market’s neighborhood locations close to homes should help ease Lidl’s entry into the Long Island market, observers said. “It may not feel like it’s someone new coming in from the outside,” according to Knudson. “I think the real estate strategy plays into that as well.”

Aldi, now in the middle of a major store opening and upgrade program, hasn’t disclosed its metro New York plans. The chain has six Long Island stores, all in Suffolk County, as well as locations in all New York City boroughs except Staten Island. But industry observers don’t expect Aldi to sit quietly as Lidl rolls into the area.

“Whenever Lidl enters a market, Aldi speeds up its expansion program substantially,” said Gielens. “I’m expecting that to happen almost everywhere Lidl is going to pop up.”

Although Aldi has been on Long Island for years, many shoppers there remain unfamiliar with the hard-discount grocery model beyond its reputation for low prices and emphasis on store brands. Lidl’s debut may pique their interest.

“In some respects, the fact that there hasn’t been much retail innovation in a number of metro New York market segments makes this model stand out even more,” Bishop said. 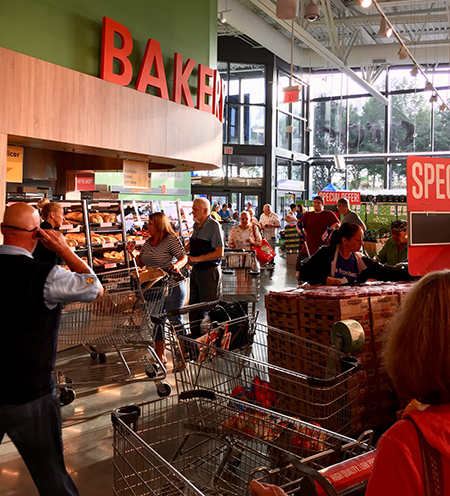 If Lidl is able to create “sufficient shock value” with low pricing on staple grocery items and meet or exceed consumers’ quality expectations, it’s likely to snare some of their regular food shopping dollars, he noted.

“People will go to these stores and sample products where they’re not necessarily going to worry about the branding. They’ll take a look at milk and the fresh produce, and they’ll see a quality and price relationship. So I think what you’ll see from folks is a trial of commodity items — their gala apples, navel oranges and gallon of milk — and then the use patterns will increase,” Bishop explained. “I’m very surprised to see how many people shop the hard-discount stores for an armload of groceries. It’s not like they have to go in and spend $80.”

What’s more, he believes that with Lidl — as with Aldi — customers will be surprised with the convenience of shopping a smaller store that has far fewer aisles and items than a conventional supermarket.

“Almost everybody today, no matter what your economic circumstances, is thinking more consciously about balancing time and money. The size of these stores and their service level — how fast they get you in and out — turns out to be disproportionately important,” Bishop said. “I think that’s an element of the secret sauce here.”

Most grocery shoppers routinely shop at multiple food retailers, and Lidl will look to grab a piece of that spending and then gradually grow its basket size, Knudson said.

“What will initially draw traffic is, ‘Let’s try it, I’ve heard about it.’ I suspect there are a number of shoppers on Long Island who have tried an Aldi, and the prices are something they’re famous for,” he said. “But what drives somebody to continue to shop there — and what incumbent grocers need to be aware of — is the produce and the meat. Those fresh categories are so important to how people choose where to shop, and the discounters have really made a statement about the quality and price points of their bakery, produce and meat. That is compelling and forces incumbents to raise their game.”

Lidl’s low pricing will have strong appeal for many Long Island shoppers, but the chain isn’t likely to trigger an all-out price war, observers say. The intensity of the pricing battle will depend more on how incumbent food retailers respond as Lidl reopens the Best Market stores under its banner.

“The question is to what extent price competition is sustainable for the other retailers. For the Aldis of the world, that is not going to be an issue because their entire business concept is based on keeping costs down. They have low prices, but they can still have a healthy margin. For most of the other retailers, it’s going to be a much bigger challenge,” Gielens said. “They can reduce their prices, but their costs are not going down. For most of these retailers, keeping costs down in the long run will be hard. So I think you will see them emphasize their private label lines even more in different price/quality tiers, where they have more control over the margins and price. It’s something where they can compete head-on with Lidl and Aldi.”

Bishop expects Lidl to contribute to a general pulldown in grocery prices on Long Island, similar to what has happened when Aldi enters a new market.

“I think what you’re going to see here is the impact of price on everybody in the market being substantially greater than just the impact of Lidl’s lower prices,” he said. “This downward draft on prices will be tough on independents.” 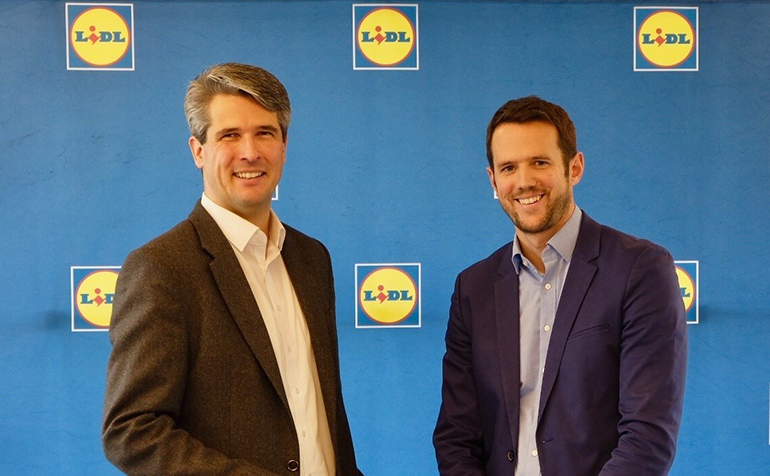 Existing grocery retailers can respond to Lidl by upping their game in areas where they could best differentiate themselves, such as produce, meat, prepared meals, and online grocery delivery and pickup, said Knudson. Still, they will have to tackle the price issue.

“There will be some degree of trying to narrow the gap in price perception, even if an incumbent is not particularly price-oriented,” he said. “I think a lot of the incumbents have financial structures that may not allow them to match prices with the discounters. But trying to at least close that gap will be important.”

Lidl encountered snags with its U.S. launch in 2017 and scaled back initial plans to open 100 stores over the following year. However, the company has since reset its real estate strategy, steadily grown its store base and earned high marks from customers. Lidl also has solidified its U.S. leadership, naming Roman Heini as Lidl US chairman effective last month and Johannes Fieber as Lidl US CEO last spring.

Those efforts show that Lidl is determined to boost its U.S. presence, observers say.

“Despite some early stumbles, we still believe they are committed to the U.S.,” Knudson said. “Once they get their feet under them in a market, they can take a reasonable amount of customer share.”