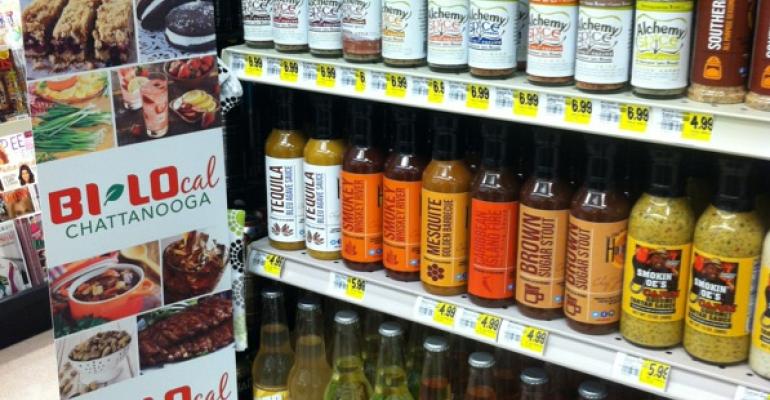 &ldquo;We are definitely continuing to pursue this, and expect to get to all of our major operating areas over time.&rdquo; &mdash;DEREK LOTT, Bi-Lo Holdings

Bi-Lo Holdings is going to great lengths to make sure its customers can find locally made products in its Bi-Lo and Winn-Dixie stores.

The Jacksonville, Fla.-based company launched an effort a year ago to seek out local vendors by giving small start-ups an opportunity to pitch their products to the retailer. (Although the set-up sounds similar to the hit TV show “Shark Tank,” vendors told SN that the Bi-Lo and Winn-Dixie product judges are actually much more pleasant than the often acerbic cast of that program.)

Bi-Lo and Winn-Dixie launched the local initiative — dubbed Bi-Local and Winn Local —at Bi-Lo stores in the Charleston, S.C., market and have since rolled it out in the Chattanooga, Tenn.; Jacksonville, Fla.; and the Pensacola, Fla./Mobile, Ala., markets.

It has been so successful that the company is hoping to implement it in 2015 in several additional markets, including Birmingham, Ala.; Tampa and Orlando, Fla.; Miami; and the Greenville, S.C., area.

“We are definitely continuing to pursue this, and expect to get to all of our major operating areas over time,” said Derek Lott, senior director of supplier diversity at Bi-Lo Holdings, in an interview with SN.

In the year since the program has launched, the company has learned some important lessons, including the need to follow through with vendors to make sure they can meet the requirements of supplying a large regional supermarket chain. In many cases, the products previously had no retail distribution at all or had only a minimal presence in specialty stores, for example.

“If you ask a vendor, ‘What is the shelf life of this product?’ and they say, ‘It should be good for about two weeks’ — well, that needs to be tested and validated and certified,” Lott explained. “We can help connect them with the resources that can help them do that.”

Likewise, the company can also teach vendors about FDA label requirements and help them in other matters, such as obtaining UPC codes and meeting food-safety standards.

“We realized that identifying these gaps in the suppliers was not enough,” Lott explained. “What they needed was education. So, we have begun to have education sessions — going back in and educating those vendors on how to close those gaps.”

The company works with local community organizations, such as local Chambers of Commerce, throughout the process, from the recruiting stages on through the education offered after the products have been selected.

Lott said the program seeks to foster a culture of community that involves both suppliers and customers.

“We see it as a good business proposition not only for us, but also for the economic development of the community,” he said. “Our desire to be ‘the neighborhood grocer people shop the most’ really hinges on our ability to be local and support the communities that we serve.”

In the first year, the company saw pitches for more than 300 local products, and about 220 of those are now available at Bi-Lo and Winn-Dixie stores.

Asked what trends he’s seen among the local products his teams have screened, Lott singled out sauces — including traditional barbeque sauces — along with rubs, and both hot and cold beverages. The beverages range from locally roasted coffees to sweet teas, lemonades and pure cane sodas.

A second tier of trends, he said, could be considered healthier food choices, such as all-natural sauces and relishes or gluten-free products.

“However, the most important trend is not in a category or a particular ingredient, but in the ingenuity of these local business owners, whether it is bringing an old family recipe to the masses or a totally new inspiration,” Lott said.

“We have seen some of the most unique products offered anywhere: How about coconut ‘bacon’, reusable sandwich bags, pound cake made with moonshine, root beer barbeque sauce, or deep-fried peanuts? The ‘foodie’ era has ushered in new tastes and re-introduced old local favorites to a broader audience.”

A jumpstart in Jacksonville

One of the vendors whose products — including the aforementioned coconut bacon — are slated to hit Winn-Dixie’s shelves in January is FreshJax. The  Jacksonville, Fla.-based company makes an array of food products using organic ingredients and geared toward a healthy lifestyle. Until the company pitched to Winn-Dixie three months ago, it had primarily been selling its hot sauces, spices and other products at the Riverside Arts Market in Jacksonville. 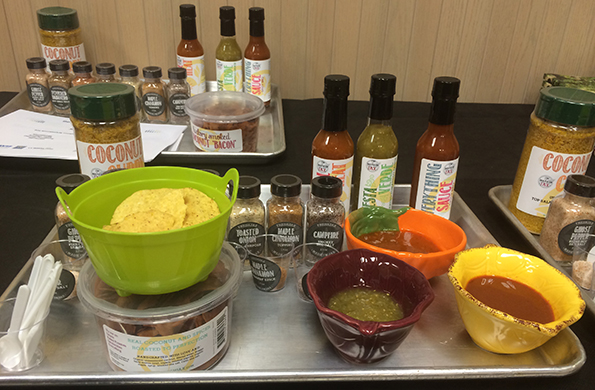 Jason McDonald, president and CEO of FreshJax, said he knew the company wasn’t quite ready for retail distribution when he pitched the products.

“I have been reading a lot about food entrepreneurs, and one thing I learned is that smart entrepreneurs say ‘yes’ [when they are offered an opportunity],” he told SN.

McDonald and his wife, Hillary McDonald, had started out by making an organic hot sauce and have since created more than 100 products for their line, which had gained a following at the Riverside Arts Market. They focused on a dozen — three hot sauces, seven spice blends, a coconut curry, and the coconut bacon product — that will be offered in 62 Winn-Dixie stores in Northern Florida.

“This is a huge jumpstart,” said McDonald, who noted that he and his wife are also opening a FreshJax café with a yoga and fitness studio in March.

He said he first heard of the Winn Local program through word of mouth, but shortly thereafter was invited to apply to pitch the products by a Winn-Dixie buyer who had seen the products at the Riverside Arts Fair.

In order to meet the demands of supplying Winn-Dixie, FreshJax has expanded to a larger commercial kitchen and added more employees. It also had to redesign its labels with FDA nutritional information.

FreshJax will handle delivery to the stores itself with a direct-store-delivery model.

Bonny Shuptrine, whose Shuptrine’s Twisted Products were selected through the Bi-Local program in Chattanooga, applauded Winn-Dixie for reaching out to local vendors.

“Bi-Lo is stepping up and putting their corporate dollars behind this, and I will be putting my support behind them,” she said.

Lookout Mountain-based Twisted Products, which Shuptrine owns with her husband, Alan Shuptrine, and another partner, Rachelle Haddock, makes a chowchow relish based on an Appalachian recipe, among other products. The couple owns a fine art gallery, and had been giving their homemade chowchow — a sauce made with pickled vegetables — away as gifts to business clients for 25 years.

“Every year every one of our clients calls and says we want more, or they tell us it should be out on the market,” Shuptrine told SN.

They began making the product commercially about a year ago and supplied it to a limited number of specialty stores before it was picked up by Bi-Lo.

The label features an image from an award-winning painting called “Twisted” by Alan Shuptrine, who is a nationally known watercolor artist.

“I think between our packaging and design, we’ve got a really good story,” said Bonny Shuptrine.

The all-natural product is positioned as a local, artisan creation, with a $7.99 price point that puts it at the high end for a relish. Shuptrine said the company would not compromise on the quality of the ingredients used in order to lower manufacturing costs, however.

“We are very passionate about how it’s made,” she said.

Winn-Dixie and Bi-Lo are promoting the new local products with special displays and signs in the stores, as well as some sampling events.

He also said the program is helping the company make its supplier community more diverse. Of the 92 products the company is rolling out in the Chattanooga market, for example, about half were from companies that are owned by women, minorities or veterans.

“We truly believe if we partner locally, the diversity will come, and we’ve proved that out in may of the local events we’ve been involved with,” Lott said.

He said it might take some time before some products are considered for potential distribution on a wider scale.

“A year from now, we’ll know which products have far-reaching opportunities,” Lott said. “We look forward to telling you the story about how some of these suppliers became regional or even national, but we are still early in the process.”