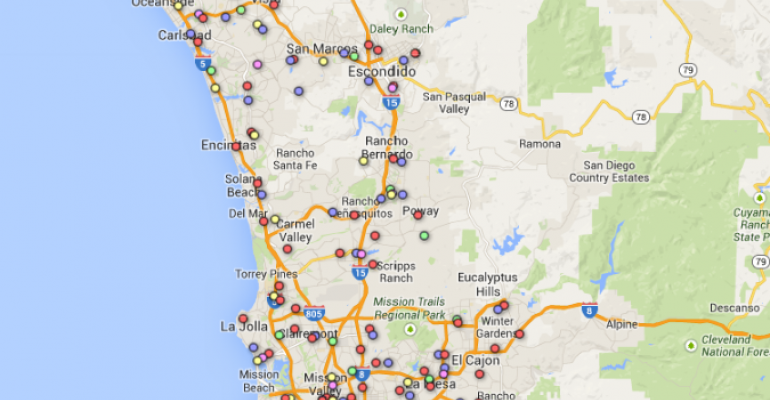 The Big Overlap: Albertsons and Safeway

After the news of Cerberus Capital Management's agreement to purchase Safeway became public in March, SN's Elliot Zwiebach investigated the top 10 key markets for overlap between Safeway and Albertsons.

While there aren't planned store closures, Zwiebach wrote, "Almost certainly, however, there will be divestitures forced upon the companies by federal and perhaps local antitrust authorities."

Of the 10 key markets, San Diego and the Oxnard-Ventura counties had the greatest overlap for Albertsons and Safeway store marketshare. Below, SN maps out the distribution of retailers in those markets.

San Diego county has a population of 3.2 million, with more shoppers moving into the area since 2010 — approximately 100,000 more, according to the U.S. Census.

The median household income, according to censusreporter.org, is just over $60,000, which is slightly higher than the median income for the rest of California.

The area's households themselves are small, with 2.9 people on average, and a median age of 35.

Most shoppers in the area are high school graduates (86%) with 35% of the population having earned a bachelor’s degree.

Ventura County is a much smaller county, with 840,000 consumers, a number that has been slowly growing over the past few years, according to U.S. census data.

The area is less culturally diverse and more affluent than San Diego county — with a median household income of almost $71,000 for households of 3.1 people on average, according to censusreporter.org. Only 11.5% of the population lives under the poverty line.

A good chunk of shoppers in both Ventura and San Diego counties are multi-lingual, with just under 40% of consumers speaking a language other than English at home, usually Spanish.

Regional Report: Independents poised to gain from Safeway-Albertsons divestitures
May 07, 2014