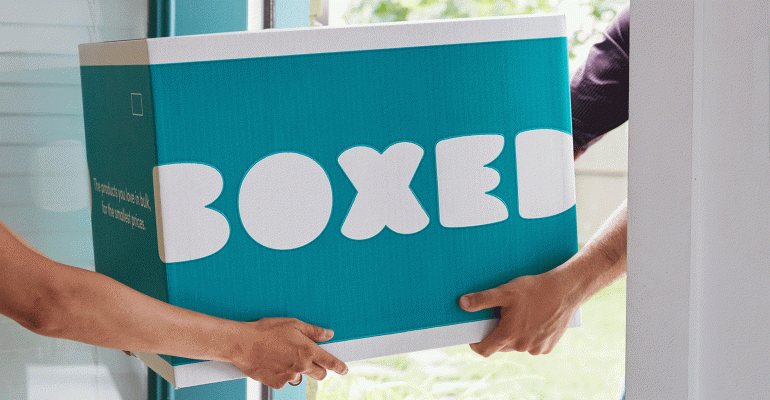 Online retailer Boxed Inc. announced that it is planning to explore strategic alternatives, including a possible sale of the company.

In a parallel move, Boxed said it is actively exploring capital raising initiatives and is targeting the announcement of additional funding within the next 45 days. The operator has retained Cowen and Solomon Partners Securities LLC as its financial advisors and Freshfields Bruckhaus Deringer (US) LLP as its legal advisor to assist with the strategic alternatives process.

“While we are actively exploring capital raising initiatives, we have a fiduciary responsibility to our stockholders to explore all options available to us, including a potential sale of the company,” Boxed said in a statement. “We are considering these strategies in addition to fundraising, to ensure the appropriate course for growing Boxed and benefiting the company and its stockholders as we move forward.”

The initiatives are just the latest efforts by the New York-based company to strengthen its finances and activities. In 2021, Boxed, which provides bulk pantry consumables to businesses and household customers via ecommerce and licenses its ecommerce software to enterprise retailers, acquired MaxDelivery, a New York on-demand grocery delivery service.

Boxed said the deal would broaden its capabilities in micro dark-store fulfillment and rapid on-demand grocery delivery and enable its customers in select markets to have a significantly expanded fresh assortment offering.

In 2018, Boxed turned down a $400 million acquisition offer from Kroger while also receiving interest from Amazon, Target, and Costco, according to news reports. Boxed launched in 2013.

Boxed reported net revenue of $41.7 million for its third quarter ending Sept. 30, 2022, a decrease of $7.4 million, or 15.0%, versus the prior year period, which was primarily driven by a decline in its Software & Services segment revenue. The company had a net loss of $26.4 million for the third quarter, compared to a net loss of $5.9 million in the year-earlier period, the company said.